Sir William Allan began his career as an apprentice to a carriage painter though he was soon accepted to the Royal Academy of Edinburgh. There he befriended David Wilkie and the engraver John Burnet; all would become important artistic figures. Allan did not wait long before seeking his fortune in London where he adopted the style of the English painter John Opie, which he employed in his painting Young Bohemian Girl that was sent to an Exposition at the Royal Academy. Initially unsuccessful in London, the artist soon left for Saint Petersburg. He toured the interiors of the Russian and Turkish Empires recording a great number of studies he would use in later Orientalist paintings. In 1809 he sent a painting to the Royal Academy representing Russian Peasants on their Day of Rest, a view of the Russian countryside. When Allan returned to London in 1814 his paintings Circassian Captives and A Circassian Chief selling a Turkish Pacha the Captives Belonging to a Neighboring Tribe, Abducted During the War, subjects he had witnessed first hand on his voyage east, were ill-received at the Royal Academy. 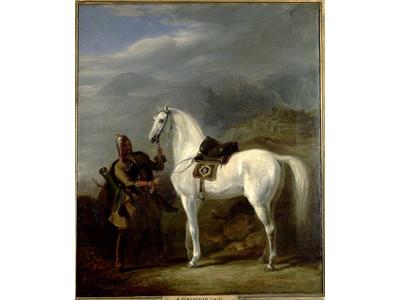 Allan was preparing to retire to Circassia on the Black Sea, when Sir Walter Scott encouraged Allan to abandoned the Orientalist genre and take up historical painting. Success finally came to the artist through his portrayals of subjects borrowed from Scottish Novelists, images made famous by the engravings of John Burnet. Allan paid tribute to Burnet’s engravings in several pictures including The Orphan Girl, from the novel by Anne Scott.

In 1830 Allan made another journey, this time to Spain; the painting entitled The Moorish Girl’s Love Letter resulted in Allan being elected a member of the Royal Academy of Scotland. In 1838 he was chosen to be president of the Academy and in 1841 he succeeded his friend and compatriot David Wilkie as Scotland’s painter to the Queen. Allan was knighted and in 1843, he presented The Battle of Waterloo, with Napoléon as the principle figure, which was purchased by the Duke of Wellington. The Circassian Chief Preparing his Stallion was painted in the same year predicating a return to Orientalist subject matter. Allan returned to Saint Petersburg where he painted Peter the Great Teaching his Subjects the Art of Constructing Ships for Czar Nicolas I. Allan returned to Scotland and to Scottish subject matter; his last work was The Battle of Bannockburn, which was left unfinished at the time of his death in 1850.