Mihail Chemiakin was born in Moscow in 1943, grew up in occupied East Germany, and returned to Russia in 1957 where he was admitted to the Special High School of the Repin Academy of Art in Leningrad. He was expelled from art school for failing to conform to Socialist Realist norms, and from 1959-1971 worked as a laborer in various capacities. He was subjected to compulsory treatment at a mental institution, which was a standard way of dealing with ideological dissidents at that time. For five years he worked on the maintenance crew of the Hermitage Museum. In 1967, the artist founded the St. Petersburg Group and developed the philosophy of Metaphysical Synthesism, dedicated to the creation of a new form of icon painting based on the study of religious art of all ages and peoples.

Chemiakin was forced out of the USSR by the Soviet authorities. He settled first in France, then moved to New York City in 1981. While in Paris he edited and published Apollon-77, an almanach of post-Stalinist art, poetry and photography in which many of the “non-conformists” were first published. Chemiakin also recorded and published the first disks of gypsy singers Vladimir Poliakoff and Aliocha Dmitrievich, both of whom lived in Paris. 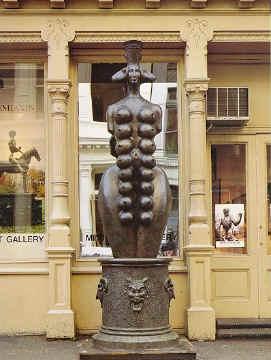 In 1971 He worked for several years with Russian bard Vladimir Vysotsky, systematically recording his songs for what became a seven-record set of Vysotsky’s music. Chemiakin continues to publish books and music by under-recognized artists under the aegis of the Apollon Art Research Foundation.

In 1989, the return of Chemiakin’s work to post-Communist Russia began with the first exhibition of his work there since his exile. Subsequently, he continued to show his work in Russia and has installed four monuments in St. Petersburg, to Peter the Great, to the Victims of Political Repressions, to the Architects and Builders of St. Petersburg, and to assassinated deputy mayor M. Manevich. Chemiakin’s Cybele: Goddess of Fertility stands in New York’s SoHo. A variation on the monument to Peter the Great is on permanent display in Normandy. In 1998 Chemiakin’s Monument to Giacomo Casanova was installed in Venice in honor of the bicentenary of Casanova’s death. Dialogue between Plato and Socrates, a memorial to Professor Harold Yuker, is installed at Hofstra University in New York; a monument to actor Savely Kramarov stands in San Francisco. Chemiakin’s monument to Children - Victims of the Sins of Adults, commissioned by the city of Moscow, stands in Bolotnaya Square in the city’s historic center.

The research begun in the 1960s into the art of all ages and peoples has developed into a collection of millions of images organized into technical, historical and philosophical categories which has earned the artist five Honorary Doctorates and is the basis for his Institute of the Philosophy and Psychology of Art.

Chemiakin’s first theatrical work was at the Rimsky-Korsakov Conservatory in St. Petersburg (then Leningrad) in 1967. He designed a production of Shostakovich’s opera-bouffe The Nose which was directed by Fialkovsky. As everyone involved knew in advance, the production was closed down by the authorities immediately after the premiere. Chemiakin’s first ballet production, The Nutcracker, premiered directly across Theater Square from the Conservatory, 34 years later.

Mikhail Shemyakin is one of the few Russian painters who became famous in the West first, and only afterwards in his homeland. The well-known French critic Alain Bosquet wrote about him: "Shemyakin is one of those rarely born artists who become a legend in their own lifetime. One needs time to recover from a shock produced by the striking array of their frenzied colors and charming forms to feel the deep philosophic essence of their works.

Shemyakin's paintings are exhibited at museums throughout the world. His sculptures adorn squares in Venice, San Francisco and Moscow. Last year he revealed another facet of his versatile talent, emerging as the producer, stage decorator, costume designer and even librettist of the new production of Petr Tchaikovsky's ballet "The Nutcracker" at the Mariinsky Theatre in St.-Petersburg.


Mikhakil Shemyakin was born in 1943 in Moscow. Later the family moved to St.-Petersburg where Misha entered a specialized school at the local Academy of Arts and began studying the principles of Orthodox icon-painting, the art of ancient Egypt, American Indians and Australian aborigines. In all that captivated his attention he found some interesting elements, yet never merely copied them but created his own inimitable style that critics later dubbed "metaphysical synthesis". Shemyakin made illustrations to Dostoyevsky's novels and a cycle of drawings of Leningrad he signed by the city's original name - St.-Petersburg. In the early 60s he was put into a mental hospital and in 1971 was forced to emigrate from the Soviet Union, first to France and then to the United States.

It wasn't until the "perestroika" in the late 1980s that the painter got an opportunity to return to Russia. Nevertheless, he still lives permanently in the United States and spends much time in France. This doesn't prevent him from maintaining close contact with Russia and engaging in all sorts of public activity. For one, he is the head of the committee to rescue Soviet POWs in Afghanistan. Shemyakin doesn't stand aloof from burning cultural problems facing Russia, especially the Caucasian region.

His profound interest in the Caucasus stems from his half-Caucasian origin. Shemyakin's father, Mikhail Petrovich Shemyakin, was a Kabardian (the Kabardians are a Caucasian tribe). He was still a boy when he lost both of his parents and got the surname Shemyakin from his adopted father. Some historians believe that Shemyakin's ancestors can be traced to the Mongol military commander Kardan, the grandson of Genghis Khan, who took part in Mongol military campaign of the 1241-1242. Half of Kardan's descendants numbering about 60 thousand live in Kabardino-Balkaria, a Russian autonomous republic in Caucasus. The rest are scattered across the world. Considering himself a Russian, since he was brought up on Russian culture, Shemyakin maintains close links with his Kabardian relatives and does much to help Caucasian painters and sculptors gain prominence in Russia and abroad.

"My heart is grieving over Russian culture and the culture of the Caucasus", Shemyakin said in an interview. ''Caucasian artists and sculptures find it very hard to win recognition nowadays. Having no opportunity to exhibit their works in Moscow or St.-Petersburg, they remain practically unknown to anyone. In spring I am planning to open an affiliate of my New-York Institute of Psychology And Art in Nalchik (the administrative center of Kabardino-Balkaria). It will provide exhibition space for Caucasian artists. A similar center to propagate Caucasian art will open in St.-Petersburg". He also intends display Caucasian painting and sculpture at his Paris art gallery.