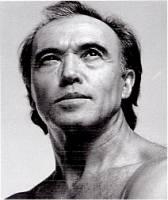 Muhadin Kishev was born in the Republic of Kabardino-Balkaria, in the Caucasus to the south of the Russian Federation, home to many talented minds, musicians and artists, where he is recognised as the leading artist of the pre-Glasnot generation.

He has numerous publications and catalogues in different languages, and over the more than forty years he has spent dedicated to art, he has taken part in dozens of solo and group exhibitions in Russia and in many other countries, achieving international recognition. His works are to be found in museums in the Russian Federation and in private collections all over the world. 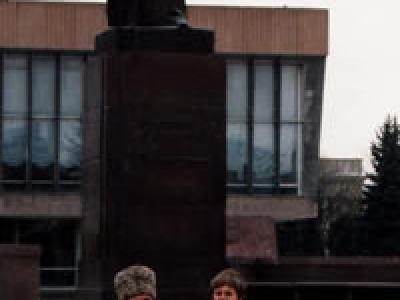 Member of the Union of Artists, honoured artist of Kabardino-Balkaria and member of the prestigious Russian Academy of Arts (RAA), his outstanding artistic gifts have always allowed him to travel, and after the break up of the USSR, Muhadin was given the opportunity to paint in London as guest artist at the Chisenhale Studios. He now he lives and works in Spain, in his studio in Caños de Meca.

The early days of “Perestroika” in Russia saw the creation of a group of young, talented and professional artists, with Muhadin at their head as mentor and tutor, for which he was awarded the Laureate prize of Lenin Comsomol. The group painted in the Artists’ residences “Baikal” and “Goriachi Kliuch”, where in Soviet times free expression had been restricted.

Their work was often censured, and so it was with Muhadin, whose pictures were excluded for not conforming to social realism – pictures which were later to have great success in Russia and beyond.


Muhadin Kishev has used the freedoms gained over the last ten years to set out on what amounts, effectively, to a second career. What this has meant is that, instead of remaining content with the idea of being a senior artist who, in is 60th. year might have been expected to rest on his laurels as a long-standing member of the Unión of Artists and numerous other artistic honours, we find a painter who, with all the boldness and enthusiam of student over half his age, is prepared to come to London over a four-yeard period (1994-98) and practise as visiting artist in the highly experimental atmosphere of the Chisenhale studios in East London, where he had a number of successful exhibitions, among which was one in aid of the war children in the Caucasus. 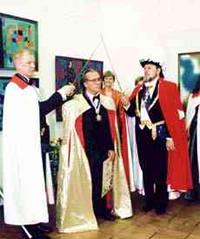 Since a child he has heard the call of the South and he now lives and works happily in his studio in Andalusia all the time pushing his work forward in a whole variety of new and experimental ways so that, as an artist originally trained to work on large-scale mural and mosaic projects, his art has begun to develop in a quite extraordinary explosion of styles, techniques and subject matter.

Muhadin Kishev’s work is permanently on show in the Gallery, “MossCo Art World” in Puerto Real, and in his studio in Los Caños de Meca, in the Province of Cadiz, Spain.

The new Museum of Contemporary Art in Moscow has a selection of his latest work, dedicated to the seasons of the year with the title, “The Wheel of the Year”.
Muhadin participates in Art Fairs in Europe and in Moscow and exhibits regularly in London, Moscow and in Spain. He is frequently invited as guest artist to give master classes to students, not only in Russia, but also in England and in Spain, where he generously imparts the techniques of the Russian School of Art developed by him over a lifetime of dedication.

“Abstract painting is a wonderful kind of art where one can feel the music of the colours, where everything is very finely tuned with nothing superfluous neither in the colour or in the drawing.” (M.Kishev)

"Kishev's work, at first sight, appears almost bewildering in its sheer range and intention. But this variety and profusion is, paradoxically, precisely what all his works have in common, and is very much to the point also, being the completely natural expression of a quite remarkably open and, in the very best sense, child-like delight in the visual and sensual pleasure of simple things. A poetic art like that of Muhadin Kishev's gives heightened awareness to our everyday experience."