The Circassians in Israel

The Circassians in Israel 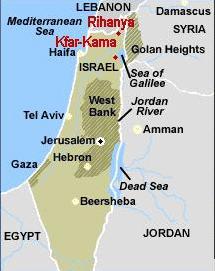 Circassians arrived at their present location from Balkans in year 1880 after 10 years of residence at Marvel-border of Greece and Bulgaria, they migrated to Palestine, the Holy Land of the three monotheist religions. Ottoman Sultan asked them to reside at Rihania (Reyhaniye) and Kfar-Kama villages. About 1000 Abadzekh Circassians live in Reyhaniye and about 2000 Shapsugh Circassians live in Kfar-Kama and scores of families live in various Israeli cities and towns near their jobs.


Kfar-Kama the larger village has Jewish settlements as neighbours. Children graduate from village school and continue their education at Jewish schools.

They learn Hebrew, English and Circassian at school, National Circassian Alphabet of Caucasus is used in teaching Circassian. Reyhaniye is closer to Arab settlements as neighbours and children are able to go both Arab and Jewish schools.

Circassians serve in the army and employed in the border and regular police force. Municipal and public services are wide open to the Circassians. Circassians living in these two villages communicate in own Circassian language.

The Circassian Law (Khabza) regulates the conduct of the Circassians and settles all matters among themselves.


After a day in the UJIA Karmiel office, I was glad to be leaving for Rihania, a Circassian village along the Northern Road. Earlier in the year I had done a project on the Circassian minority in Israel, so, thankfully, entering the village wasn't too much of a culture shock.

The Circassians (pronounces 'serkajians') are a small minority in Israel numbering around 3000. Originally from the Caucuses near Russia they came to Israel in the service of the Turkish sultan in the 1870s. While practicing (moderate) Muslims, they also have their own customs and culture particular to their society, and indeed make a distinction between the religious and 'cultural' aspects of their lives. The Circassians live in two respectively close-knit societies in Israel - Kafr Kama and Rihania, and are fully accepted Israeli citizens. In 1948 the leaders of the community requested that Circassian young men were conscripted by the State as proof of their allegiance to Israel.

My first stop in the Village was in the home of Marina, the community worker of Rihania, who talked to me about the history of the Circassians and their life in Israel. Every once in a while, one hears, says, or does something that causes a shift in their perceptions. During this talk I had one such 'shock' - I asked a questions about "the Israelis". I was asked in return, "you mean the Jewish Israelis?' For perhaps the first time in my life the fact that not all Israelis are Jews was brought home to me. Obviously, I had known this, I had even written an essay about it, but I had had never heard a non-Jew refer to himself as Israeli. This might not sound like a momentous epiphany, but I suddenly really understood one of the truths of Israel.

I was in Rihania for two nights, staying with Neriman Abzakh, a seventeen-year-old girl speaking remarkably good English. Spending so much time with some one of my own age was a great way to begin to learn about life in the village. After the initial awkwardness of knowing you're to be spending two days with someone you've never met before, Neriman and I got along excellently. I was introduced to her friends and cousins (it seems like everyone in the Village is related to each other), and was continually fascinated by the language that I hear around me. The Circassians are in general, fluent in four languages; Circassian, Hebrew, Arabic and English. Their mother tongue is Circassian, the sound of which language I am completely unfamiliar with. Sounding neither Arabic nor Russian or Latin, it was about as intelligible to me as Japanese.

In the village of Rihania I had the same experience as I did while I was working with the students from the SLA (South Lebanese Army); a teenager is a teenager, a person a person, no matter who they are. Sitting in the bedroom of an eighteen-year-old Circassian, discussing clandestine boyfriends and parental problems, I could have been anywhere.

Life is difficult for the girls of Rihania. Their lives are strictly controlled, and they have much less personal freedom than that level which we in the Diaspora and Israel take for granted. The boys find themselves in a similar situation, although it is less 'extreme'.

Occasionally, however, I was reminded that I was talking with people from another world. As I looked around the lounge-room of the girl whose house I was staying in, it was hard to miss the posters of Circassian dancing troupes, the traditional musical instruments, the decorations, passed down from generation to generation.

I asked the girls once what made them Circassian. Their response; "what makes us Circassian? Everything. We speak Circassian, our history is from the Caucuses, we dance to Circassian music, we have traditions which no-one else has - Circassian traditions."

One of the highlights of my evening occurred when Neriman decided to show me Circassian clothing and promptly put on a long velvet blue dress with golden ties and ribbons. It closed at the waist with two heavy, solid, engraved silver clasps. They didn't know where they came from. "Every family ahs things like this; they've always been in our family - they're hundreds of years old." While meant for adults, the dress was made to fit the waist of a child - apparently, when they lived in the Caucasus, the women had to fit the dress, not the other way around.

The young people whom I met all say that there is nothing to do in Rihania, although there is more there than in the other moshavim of Merom HaGalil that I have visited. The children of the Village entertain themselves by driving around and around the narrow streets. I was treated to a ride at an unspeakably fast rate on an ATV (All Terrain Vehicle), an experience which, despite the wind which brought tears to my eyes, gave me a great view of the village (it was fun, too).

Wandering around the 'old city' of Rihania did the same, and I was privileged to be allowed into the village's mosque. While very simple, it is fascinating in that it is built along the lines of a church - square instead of round, no minaret - a sign of the community's Christian roots.

So ended the second day of my options period - with the Circassian girls finding out about life in London, a me discovering life in a Circassian village. A profitable exchange? I think so.