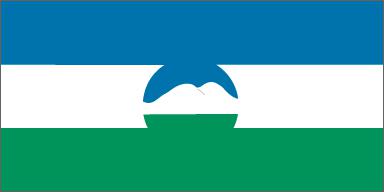 Kabardino-Balkarian Republic is one of 89 subjects of Russian Federation located on the northern slope of central Caucasus and the adjacent plain.

More than a hundred nationalities live here. Of them Kabardians make 49,2 percent; Balkars - 9,6; Russians - 30,7; and representatives of other nationalities - 10,5 percent.

The capital of the republic - the city of Nalchik - was founded in 1818. Nalchik is a large cultural, scientific and industrial centre, All-Russian resort with the population of 257, 3 th. people.

Geomorphologically the republic is subdivided in three parts: mountains, foothills and plains. Half of the area is occupied by mountains which together with foothills are affluent in mineral resources and springs, pastures and woods. The plains abound in fertile soils. The republic has vast deposits of molybdenum and tungsten, lead, tin, copper, iron ore, gold, arsenic, antimony, stone and brown coal, petroleum, tuff, volcanic pumice and ashes, phosphorite, limestone, marl, gypsum, floridine and fire-clay; there is about a hundred of hot, cold and mineral springs. Fauna is opulent with a variety of game and birds. Climate is moderate: the average annual temperature is 9-10 degrees of heat, and annual precipitation quantity - 600-700 mm. 215 days a year the temperature is more than 5 degrees of heat by Centigrade.

Kabardino-Balkarian Republic is one of the most attractive and moreover economically and socio-politically stable centres of Southern Russia. This opens up broad prospects for mutually beneficial relations in various spheres of foreign economic activities.

In terms of finance and raw materials the republic is based on non-ferrous ores, petroleum and natural gas, various kinds of mining and chemical raw materials, various mineral and fresh water springs, valuable building materials. In all, more than 40 mineral deposits are exploited, and the assessed supplies of mineral springs are more than 12 thousand cubic metres of daily debit. A number of deposits is absolutely unique. The Tyrnyauzsky tungsten-molybdenum complex - a famous supplier of strategic raw materials - is working on the basis of one of the world richest tungsten and molybdenum ore deposits.

The natural, climatic and demographic conditions of the republic mainly meet the requirements of quite developed mulatto-branch economy. The industry makes half the gross national product and, of course, takes the leading place.

Kabardino-Balkaria manufactures many quality things, such as oil-extracting equipment, various kinds of electrocables, diamond tools, artificial leather, film materials and many more. These goods are in great demand both on home and foreign markets. Recently has been observed the development of such branches of industry as chemical and petrochemical, electrotechnical, electronic, mechanical engineering, wood- and metalworking, ferrous and non-ferrous metallurgy, instrument-making, power-engineering, food-processing and light industry. The main peculiarity of the industry is its high concentration in few industrial centres - Nalchik, Tyrnyauz, Prohladny, Terek, Baksan and Maysky.

The traditional branch of sheep-breeding gives way to manufacturing of multifarious consumer goods out of sheep-skins, so it’s expedient to construct local sheepskin processing enterprises and furriers. In this connection joint ventures with foreign investments are extremely encouraged.

The process of country farms establishment in Kabardino-Balkaria proceeds. Their total number amounts to 470 with ground area of 5,2 thousand hectares. Their importance in food supplies on the local market is increasing.

About 90 percent of electricity consumed is supplied to KBR by the Northern Caucasus Integrated Power Grid. In these conditions, besides the four existing hydro-electric power stations with general capacity of 27 thousand kilowatt, it is expedient to construct the chain of large and medium-sized hydro-electric power stations on mountain rivers, as well as to use non-conventional sources of energy, such as solar, geothermal and biopower. Potential average annual capacity of Kabardin-Balkar rivers basin exceeds 8 mln.kilowatt.

Automobile, railway and air transport are developing on an extensive scale. Economic ties with other regions of Russian Federation are provided by the railway and, in particular, motor transport. The latter’s share in total volume of cargo and passengers transportation is more than 80 percent. In this connection it seems that further development of first class motor road system and completion of construction of a circuit around Nalchik will greatly improve ecological conditions of the capital and resorts.

«Nalchik» airport provides direct flights not only to Moscow and other regions of Russian Federation, but to Turkey, Syria, Jordan and United Arab Emirates as well. The construction of a new top level airport complex is under way and the local authorities are in quest for foreign partnership in this field. 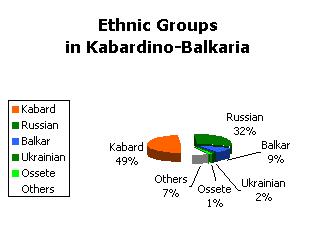 The important place in the republic economy belongs to foreign economic activities. The major articles of export are artificial diamonds and tools made of them, tungsten and molybdenum, oil-extracting, medical and wood-processing equipment, cable production, artificial leather, raw leather materials and furs, agricultural production. Among the imported things one can name equipment and machines, food products, grain cultures, medicines and various consumer goods. In total volume of export deliveries the share of raw materials and goods is more than 70 percent, the share of machines and equipment is 27 percent. More than a half of production is exported to capitalist countries: Turkey, USA, Germany, Finland, Netherlands. The significant part of import (82 percent) is intended for Baltic States, Western and Eastern Europe.

The Administrative Committee of the program "Stabilization and Development of the Economy of Kabardino-Balkarian Republic" (Administration of Free Economic Zone) and Ministry of Foreign Relations of Kabardino-Balkarian Republic are taking a complex of measures on enhancement of investment appeal of the republic and improvement of foreign investors working conditions.

There are two main directions:
1. Regulation of registration and further work of foreign enterprises and joint ventures.

At the moment the agreement is signed between Administration of Free Economic Zone and State Registration Chamber under the aegis of Ministry of Economy of Russian Federation. Thus, the registration of all enterprises with foreign participation is entrusted with free economic zone (FEZ). Under this agreement, at the Ministry of Foreign Relations of Kabardino-Balkarian Republic the Branch of Registration chamber has been created. It will register all the joint ventures in Kabardino-Balkarian Republic and then promote their efficiency, co-ordinating and interacting with the authorities.

2. Granting tax and other privileges to foreign investors.

The granting of tax privileges was started in 1996 by adoption of the law, according to which non-resident enterprises in Kabardino-Balkarian Republic enjoyed certain privileges in terms of the taxes collected for republican and local budgets.

Currently this law is elaborated in the Parliament of Kabardino-Balkarian Republic with the purpose of deepening and broadening of investors privileges, their complete exemption from taxes, collected for republican and local budgets.

The Government of the republic has considered and submitted to the Parliament the laws "On investing activities and investors tax privileges in Kabardino-Balkarian Republic" and "On creation of zones of economic development in Kabardino-Balkarian Republic". The point of both laws is to exempt foreign investors participating in economic development of the republic from the taxes collected for republican and local budgets.

After adoption of the Law of Russian Federation "On free economic zones in Russian Federation" there appeared legal ground for implementation of the Enactment on creation of free customs zone of production type in KBR. The first in Kabardino-Balkarian Republic free customs zone is going to be located on the territory of "Elbrus-Avia" airport. Besides the trade operations, it’s supposed to provide on its territory the registration of industrial enterprises, insurance company and the bank, and also organise customs warehouse facilities and necessary infrastructure.

Kabardino-Balkarian State University (KBSU) is the leader among the higher schools of the republic. It has 15 faculties and 77 chairs and about 9 thousand students are specialising here in 40 various directions, including economics and law. More than 60 percent of fundamental scientific researches conducted in the republic are carried out in KBSU.

The republic has large scientific potential, allowing to carry out both fundamental and applied researches of regional and nation-wide importance. Lots of research, conducted by the scientists of republic, is carried out within the framework of state programmes.

Today the fundamental sciences are represented here by research institutions:

Besides there are dozens of design offices, project institutes and college research laboratories.

Kabardino-Balkaria is All-Russian and international centre of tourism, mountain climbing and downhill skiing. 14 tourist centres, 8 Alpine camps and 6 hotels function here. High mountain ranges, deep gorges with mountain rivers rushing down, forest-clad slopes, attractive alpine meadows can easily convince anyone that the Trans-Elbrus area is not only in no way inferior to the Western centres of tourism and mountain-skiing, but exceeds them in the primordial beauty of its nature.

The Republic is one of the best Russian health-building centres in terms of facilities provision and comforts. A combination of spas with sulphate-, iodine-bromine- and nitrogen-rich springs and the miraculous curative muds of Lake Tambukan makes it a unique place for people with health problems Particularly popular is the resort of Nalchik - 340-hectare oasis of orchards and parks - with its magnificent compound of different health-building institutions.

On common recognition, Kabardino-Balkaria is a republic with the most stable socio-political situation, providing extremely beneficial conditions for versatile and mutually advantageous relations.