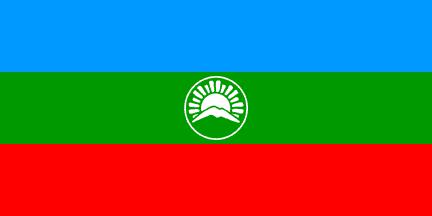 The Karachai were driven into the highlands of the North Caucasus by Mongol tribes in the 13th century. Their territory was annexed by the Russian Empire in 1828 but they continued to resist Russian rule throughout the 19th century.

Many Karachai emigrated to the Ottoman Empire in the 1860-70s to avoid Russian oppression. The Karachai Autonomous Okrug was established in 1920. The Cherkess are a subgroup of the Circassians. They had come under Russian control in the 1550s for protection against the Crimean Tatars and some Turkic tribes. Relations with Russia deteriorated when many Russians settled in the region. Following the end of the Ottoman claim to the Caucasus in 1829 and the resulting uprisings, Russia completed its occupation of the territory in 1864. Subsequently, many Cherkess were deported to Turkey at this time. The Cherkess Autonomous Oblast was first established in 1922.

With 40 percent of the population being Russian and an administrative status as subordinated as the Russian Stavropol Province and the lowest possible level of autonomy until 1991. Russification is strong in Karachai-Cherkessia.

The fact that the 28,000 Abaza lack all the privileges of a titular nation, which the 40,000 Cherkess share in power with the much large group of Karachai, is a clear example of the arbitrary nature of the Soviet construction of double titular nationality republics and its consequences. Formal power-sharing notwithstanding, Russians have dominated political life in the new Karachai-Cherkess republic. This might change if the experience of neighboring Kabardino-Balkaria with a similar make up, can serve as a model for development.

The Karachai claim full rehabilitation after the deportations. More radical Karachai movements insist on territorial expansion and autonomy or even separate Karachai Republic, in accordance with the situation prior to the deportations. Cossacks have voiced claims of seceding from the republic to join the Kuban Cossacks in the neighboring Krasnodor district.

Still, a poll held in 1993 resulted in 78.6 percent wanting to preserve the Karachai-Cherkess republic as an undivided unit, so it seems that most people fear the consequences of claims made by the radical groups. The Karachai urban centre Karachaevsk, has been selected by the Confederation of Repressed Peoples as the location or their main office.

The territory proclaimed itself a republic in 1990. Special laws and agreements: The republic agreed to a division of responsibilities by a treaty with the Russian Federation in 1995.

Karachai-Cherkessia adopted a program on the coordination of legislative, economic, environmental and legal activities with the Republics of Adygea and Kabardino-Balkaria in May 1998.

Sources:
1- The North Caucasus: Minorities at a Crossroads (Helen Krag and Larsh Funch)
2- Datebase of The Centre of Russian Studies (Norway)