During Russian-Caucasian War Tsar’s Russia did use not just ground forces but also Navy. Tsarism considered blockade of Adyghe (Circassian) sea coast as one of the main measures to conquest the Circassia, thus Russians wanted to stop any kind of connection Adyghe people with the rest world. The active role to fulfil it had assigned to Russian Navy. From the 1830 year along the eastern coast of Black Sea had patrolled especial Russian squadron named “Abkhazian expedition”. Battle cruisers did not allow to sail for commercial European and Turkish vessels towards Circassian coast. And on the other hand Tsar’s navy fought along the Black Sea coast of Northern Caucasus by landing numerous ground troops. They were occupying the most important places in strategic military meaning. In 1837-1839 years with the Navy’s assistance had been founded such military forts as: Saint Doukh on the Adler cape, Velyaminovskoye on the mouth of Tuapse River, Tenginskoye on the Shapsugh River, Novorossiysk in the Sudjoukh bight, Navaginskoye on the Sochi River, Golovinskoye on the Shakhe River, Lazarevskoye on the mouth of Psishuapa River.

Fighting with aggression of tsarism coastal Adyghes used their Navy, which consisted from small ships, named in European sources of 19 century as “galley”. Circassians mastered Black Sea navigation from ancient times and therefore they were very experienced navigators and sailors. There are a lot of information about Circassian navigation in ancient (Strabos, Tacitus, etc.) and medieval (Al-Masoudi, D. Interiano, etc.) sources.

By the 19 century sea navigation had very serious traditions. According to Swiss scientist F. Dubua de Monpere who observed Circassian galleys personally, that vessels could hold 60-70 persons each. But there also were which could hold up to 140 men. Adyghe vessels were sailing ones with the oars and sometimes were armed with light cannons. They could make very long coasting navigation. Russian trade representative in Western Circassia L.Y.Lulye wrote: “Coastal high-landers sailed very actively. For the transportation of provision from one gorge into another they used the same rowing-ships (galleys) as they did for the sea roads. I saw it by myself, how they were coming on the galleys using oars from very remote places of coast into Sudjouk bight (Novorossiysk) and even to fortress Anapa.”

F.F.Tornau, who served in Caucasus several years witnesses about excellent seaworthy qualities of Circassian galleys. The traveler J.Tebu de Marini describes the Circassian vessel in this way: “Their ship, as all I saw before was flat-bottomed, without keel, casing was fixed to the very fine ship frame by nails and wooden pins. On the nose was image of animal’s head. It was hard to figure out what animal that was exactly, but Circassians asserted that it was a head of the he-goat…” The oars on their galleys are very short and fixed to rowlocks of enormous length with the transverse cross-bars for the hands of rowers. They used rudder and small square sail”.

Circassian had not permanent Navy, but they completed galley detachments to take action against Tsar’s troops and Navy. The important form of Adyghes’ fight was attacks of their galleys onto Tsar’s military ships. Quite often on the water of Circassian coast took place very fierce fights. In 1832 year by high-landers was attacked Russian cutter with 12 cannons. Tsar’s administration was really afraid to leave vessels in Sudjouk bight even with guard, because Circassians could seize it using galleys during dark night. 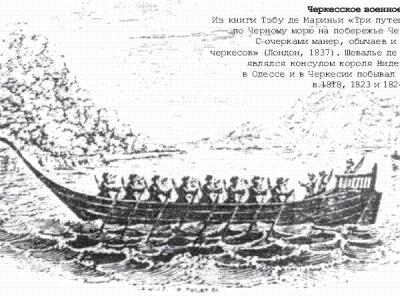 *Circassian Navy from Tebu De Marini's book ''Three Voyage in Black Sea of Circassia coasts. With sketches of manners, traditions and religion of Circassians.'' (London 1837) Knight De Marini, has been in Circassia three times as ambassador of Holland King: 1818, 1823 and 1824.


In the October of 1836 year Tsar’s vessel “Nartsiss” was attacked near to mouth of Sochi River by 7 Circassian galleys. After, the commander of Russian vessel captain Varnitskiy reported that Circassians fought in organized manner, their commander was showing by long pole to each galley its place during attack. After fierce fight Russians escaped.

The roads of Circassian vessels became a serious reason to worry for Command of tsar’s Navy. Especial measures of Black Sea Navy Headquarters were undertook to prevent roads of Circassian navigators. In the Central State Archive of Russian Navy retained description of one interesting affair “About dispatching toward abkhazian coast gunners ships to take action against galleys used by Circassians”. Its noteworthy fact that from the first time of conquest of Circassia the Russian Ministry of Foreign Affairs considered destroying of “thugs’ haunts” on the Black Sea coast as the main measure to conquer Circassia.

For the destroying of Adyghe galleys and struggle to prevent Turkish trade ships penetration Russian Command established cruises by small rowing-boats. To serve on them Cossacks of Azov Cossack troops were recruited. They consisted of 10 crews each of what concluded 20 persons. Azov rowing-boats armed small cannons, sailed by oars and had sail. Cossack boats allocated in Tsar’s fortresses on the Black Sea coast of the Caucasus. Blockhouses were used by Cossacks as barracks. The Russian commander General N.N.Rayevskiy wrote: “Azov rowing-boats would be very useful between the near distanced fortresses against Circassian galleys and contraband ships”.

However undertaken measures didn’t cause full destroying for Circassian fleet. Adyghes engaged in battles with the Cossacks on the sea many times. What is more clashes with Russian Navy’s ships continued. Thus, in the February of 1838 year took place fierce fight with 4 Circassian galleys from one side and Russian lugger “Glubokiy” from other.

Unfortunately, historical documents and testimonies of eyewitnesses give us very little information about Circassian sea chiefs. In 30 years of 19 century active roads were undertook ships of coastal Circassian, certain Hassan-bey.

Other form of using sea fleet by Adyghes in the struggle with tsarism were landings of Circassian troops from the galleys into important places and attacking suddenly points occupied by tsar’s troops. Thus, tsar’s Command were stupefied by bold and successful landing of Circassian troops close to Bombory in May 1834.

Through the using of galleys Adyghes adjusted connection between themselves and also for co-action against conqueror. They used their ships on the reconnaissance too. Circassian Navy kept connection with Istanbul and with Turkish ships they conveyed weapon and ammunition into the Caucasus for the struggle. Besides, high-landers sailed towards Ottoman Empire with commercial intentions.

In the eastern coast of Black Sea Adyghes used to pursue and seize hostile commercial ships. According to words of one Russian sea officer N.N. Sushev, who was an eyewitness of the Circassian assault. During the assault to the hostile trade ship Circassian firstly “knocked by riffle guns all the sailor from the upper deck, after they were boarding with the daggers and then after few moments all was finished…” We have to take into consideration that while war time all this also did England, Holland and others. And Circassia was not an exception in this meaning. Of course, Circassian attacks on enemy’s ships weren’t successful in every case. Thus, Vorontsov was an eyewitness of unsuccessful Circassian boarding when brave Adyghes started board Russian ship. They chose position for the attack in front of the vessel’s nose, but sailors on the deck cut off the anchor chain and while it was falling down on the light galleys all they sank with the Circassian pirates. Adyghe navigators were based on the most comfortable bays of Black Sea eastern coast. They had few arranged central points. From the words of Dubua de Monpere: “Mamay bight, which is famous from the ancient times by its sea robbery was the central spot for all the Circassian corsairs.”

Adduced facts witnesses about certain contribution of Adyghe military navigators in the war for Freedom and Independence of Circassia. After Russian conquest of the Circassia the navigation of high-landers doesn’t exist.

A.Y.CHIRG,
Krasnodar, Institute of the Culture.