Circassian: A Most Difficult Language 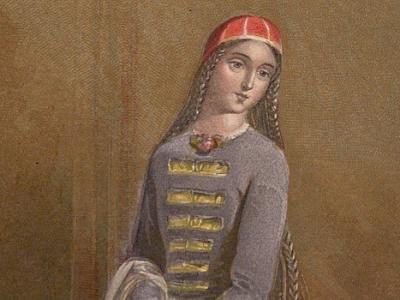 The other day, I was in the waiting room of a doctor’s office in Haifa, when three people walked in and sat behind me. Two were men dressed in Western clothes, one looking to be in his 30s and the other in his 50s or 60s; the third was a woman in her 20s of extremely fair complexion, wearing a black chador and a white headscarf that crossed her forehead in a horizontal line just above her eyebrows.

I took them to be Israeli Arabs — a wife, her husband and her father — most likely Druze, to judge from the headscarf. Yet when they began to speak in low voices, they quite clearly weren’t speaking Arabic. In fact, they weren’t speaking any language I had ever heard. It wasn’t Persian, or Turkish, or anything I could connect to an obviously Muslim woman in a chador. I sat and thought. In the end, both the husband and I rose to stretch our legs. “Excuse me for asking,” I said to him, “but were you speaking Circassian?”

He nodded without asking me how I knew, we both returned to our seats, and that was the sum of our interchange. It left me, though, with a small measure of satisfaction, the way one feels when successfully solving an unusual, if not particularly difficult, puzzle.

The Circassians, 3,000 of whom live in the two villages of Kfar Kama and Rihaniya in the Galilee, are Israel’s smallest indigenous non-Jewish population, so small that most Israelis have never met even one of them, and many don’t know of their existence. Called tsherkesim in Hebrew, their ancestral roots are in the Caucasus, which they left for Palestine in the 1870s. They were part of an emigration — mass flight might be more accurate — of more than 1 million of their people, which took place after the Russian conquest of their homeland from the Turks in the 1860s and the brutal anti-Muslim ethnic cleansing that followed. A majority resettled in Turkey; some wandered farther. Today, an estimated 130,000 live in Jordan with another 100,000 in Syria (at least prior to the current hostilities there), and some 35,000 in Iraq. In all these countries they have undergone linguistic assimilation, but Circassian continues to be spoken by some of them, including those who live in Israel.

Linguistically, the Caucasus is one of the most confusingly variegated regions in the world. In its relatively small but highly mountainous and never politically unified area are hundreds of mutually unintelligible languages or dialects, many belonging to three families — Northwest Caucasian or Circassian, Northeast Caucasian or Dagestanian, and Kartvelian (whose main representative is Georgian) — having no proven connection to one another or to any other linguistic grouping elsewhere.

The form of Circassian encountered in Israel is Adyghe, which is still spoken near the Russian city of Krasnodar, just north of the disputed territory of Abkhazia that has sought to secede from Georgia. Like other Circassian tongues, its main claim to fame is its phenomenal number of consonants, of which there are said to be 57. (English has 24.) These include three different “l” sounds, one of which is produced, according to a pronunciation guide, by passing air “through lateral slots between the tongue and the inner face of the cheek to form an intensive sound resembling a hiss”; three different “h” sounds, including “an air blast directed slightly skyward while vibrating the larynx,” and no fewer than eight different “sh” sounds, the most challenging of which, made between the front palate and the upper teeth, results in “something between a whistle and a hum.”

One can well understand the story told by Louis Loewe, a Prussian-born 19th-century English Orientalist and ex-yeshiva bokher, about the Turkish sultan who sent the most eminent scholar in his realm to study Circassian and compose a dictionary and grammar of it. After being absent for a considerable amount of time, Loewe relates in his “Dictionary of the Circassian Language (Containing All the Most Necessary Words for the Traveller, the Soldier, and the Sailor, with the Exact Pronunciation of Each),” the scholar returned to the sultan, “hopeless of success and carrying in his hand a bag of pebbles. ‘There,’ said he, shaking the bag. ‘I can give you no better imitation than this of the sounds of the language spoken by that people.’”

I must say that the three people sitting behind me in the waiting room did not sound as if they had pebbles in their mouths. Nor would I have guessed that they were speaking “one of the most difficult languages in the world,” as Loewe (who thought the Circassians were the original descendants of Noah, his ark having landed on Mount Ararat in the Caucasus) referred to it. But then again, I didn’t hear them say very much. It’s time I made my way to Kfar Kama or Rihaniya and learned more.

Questions for Philologos can be sent to philologos@forward.com

The Latest Fashion: A painting of a woman sporting traditional Circassian garb