The Circassians of Turkey Found Their First Political Party

Following the proclamation of the new Circassian Party, the founders held a press conference to provide information about the political and social programmes of the Party. 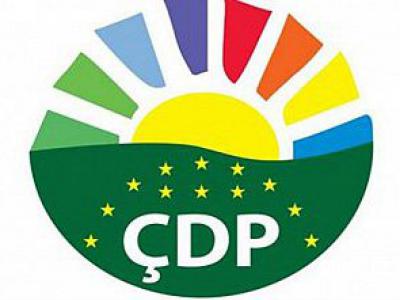 The Circassians of Turkey have founded a political party under the name “Pluralist Democracy Party” (“Çoğulcu Demokrasi Partisi” ). The new Party, the first of its kind in modern Turkish history, has been established by the members of the Circassian Rights Initiative Foundation, following months of intensive and extensive preparation. The principal aim of the ÇDP is to secure and safeguard the rights of the Circassians, and other minority groups, in the Turkish State. As of 15 August 2014, the Party enjoys legal status, and is mandated to carry out its activities and aims as defined and stated in its charter, and within the framework of Turkish Law.

Following the proclamation of the new Circassian Party, the founders held a press conference to provide information about the political and social programmes of the Party.

According to the Founding Chair of the Party, Kenan Kaplan, it is imperative to transform the Turkish State into a democratic structure by eliminating the anti-democratic and nationalist state mentality that was formed after the notorious 1980 coup d’état. The ÇDP shall become a political platform on which all the peoples of Turkey, and all the social segments, can express themselves and pursue their rightful demands. The ÇDP rejects the classification of minorities on the basis of their being Muslim or non-Muslim. It advocates a fully democratic social order in which all the ethnic identities are treated as equal and are granted equal status and rights. The Party also aims to dispel the misconception that democratization and ethnic-cultural issues in Turkey are confined to the Kurdish problem, for many other ethnic groups, including the Circassians, are not included in the process for the resolution of ethnic and cultural problems, and that the Party wants to create a platform for the participation of the other minorities in the process of reconciliation and equalization.

Minorities and their social, political and cultural rights should be protected, and multi-culturalism should become the norm in Turkish society, as opposed to the dominance of “Turkish” culture. All ethnic and cultural identities must enjoy equal respect and rights and privileges. All identities have the right to existence and self-development, and the hierarchical distinction between “supra-identity” and “sub-identity” should be dismissed. Although the country's official language is Turkish, this should not form an obstacle to education in other local languages. Upon demand, public schools should provide tutoring in local languages, and independent schools can be established to educate and teach in minority languages.