The Turkish president signed the decree late Monday that made Tambi Asaad Cimuk, who is Syrian of Circassian origin, a Turkish national. The decree was also approved by the prime minister and 24 other Turkish ministers. 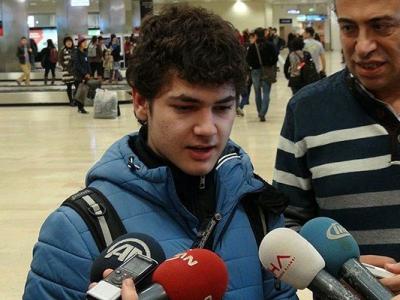 The Turkish president signed the decree late Monday that made Tambi Asaad Cimuk, who is Syrian of Circassian origin, a Turkish national. The decree was also approved by the prime minister and 24 other Turkish ministers.

Cimuk fled Syria about two years ago with his family to seek refuge in Turkey. His family and he were placed in the northwestern Turkish city of Bursa.

Cimuk applied for Turkish citizenship about a month ago, which proved to be a long and difficult process. His efforts finally bore fruit after he appeared in a television program along with his music producer last week.

“After the program, we got a phone call from Zeynep Karahan Uslu, a deputy from the ruling AK Party. She said she would do her best to facilitate the process," Rustem Avci, who is Cimuk’s music producer, said.

"We had lost almost all our hopes, but thanks to Mrs. Uslu, Cimuk is now the owner of a Turkish passport," Avci said.

He said that Uslu worked day and night, and got signatures from 24 ministers in person Monday.

"She phoned us to let us know that Prime Minister Ahmet Davutoglu signed the decree, and Erdogan would give us a call shortly. We were blown away," he said.

The time of my life

"I was so happy and proud when Mr. Erdogan called. It was one of the best days of my life," Cimuk said.

"I felt like I was born again. Mr. Erdogan told me that he signed my citizenship papers and said ‘Turkey is your home now. You have got to work even harder from now on,’" he said.

Cimuk said that he thanked the president and promised him to work harder as Turkish citizenship brought with it "greater responsibilities."

Following the decree, the civil register office in the district of Osmangazi was opened at 1:30 a.m. with a special permit, and Cimuk was issued a Turkish identity card.

Cimuk and Avci went to the Passport Office Tuesday morning to apply for a passport so that Cimuk could attend an international music competition in St. Petersburg, Russia, that starts Wednesday.

Cimuk got his Turkish passport the same day thanks to an accelerated procedure, and left for St. Petersburg along with Avci, and music tutor, Elena Cekic.

"I want to attend bigger competitions, and get the first prize," Cimuk said.