International Circassian Association (ICA) has posted on the website of the Public Chamber of the Russian Federation an appeal for the funding of the "neutralization" of the Circassian transnational movement and the associated discourse on the Internet.

April 30 the Public Chamber of the Russian Federation has received a grant application as follows:

Name of the Project: "Information counteraction ethnocentric ideology on the Internet" (strengthening tolerant relations between the peoples of Russia in the North Caucasus region by countering propaganda activities of nationalist organizations).

Short Description of the Project: "The project "Information counteraction ethnocentric ideology on the Internet "suggests the organization and implementation of measures for resisting the spreading of information of ethnocentric nationalist ideologies Internet resources aimed at Kabardino-Balkaria, Karachay-Cherkessia, the Republic of Adygea, Krasnodar and Stavropol Territory.

Project Goal: strengthening and saving tolerant relations between the peoples of Russia in the North Caucasus region by countering advocacy nationalist organizations.

In order to achieve the goals and objectives of the Union of Public Associations "International Circassian Association" plans to attract and organize collaboration of media professionals, employees of research and educational institutions, owners and founders of the regional electronic media. By the end of completion of the project it is planned to analyze the effectiveness and efficiency of methods developed to counter advocacy. " 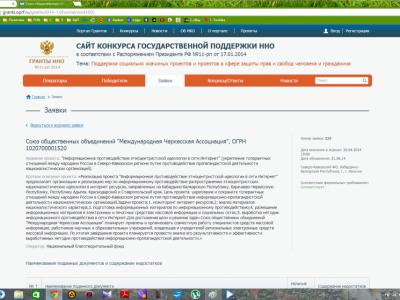 Translated into normal language, the International Circassian Association (ICA) expects to receive state funding for a project to neutralize the Circassian political factor in historical Circassia and also associated with the Circassian issue of discourse on the Internet. Ie ICA is a declaration of non-masked over its betrayal of the Circassian movement, because consider this organization as "Circassian" after so clearly anti Circassian initiatives is not possible. This is rather a division of Russian information operations troops. In practical terms, this means the completion of mutation of a once serious structure into a nursery of internet trolls, fattened by the authorities.

Duneypso Adyghe Khasa (DAH), known in Russia as the International Circassian Association (ICA) was established on the 1st World Circassian Congress (Nalchik, Kabardino-Balkaria, Russia, 1991). Being for a while a main Circassian transnational political institution, the ICA has played a prominent role in shaping the modern Circassian movement, its goals and objectives. Through its activities, were repatriated thousands of Circassians, Russian Academy of Sciences confirmed the unity of the Circassian people and its single ethnonym, parliaments of Kabardino-Balkaria and Adygea and UNPO (Unrepresented Nations and Peoples Organization) recognized the genocide of Circassians.

All this is in the past for a long time. Appointment of Khauti Sokhrokov as Thamady (ICA President) in 2012, was initially considered by Circassian activists as a toll for the organization. Twenty months that have passed since that day, confirmed the worst fears of the pessimists. But nobody could have imagined so quick and so ignominious end of a once great beginning.

Of course, the ICA will remain and will be claimed in its new format for some time. Internet trolling in Russia is experiencing a flowering - this area is full of state finances, so attractive material and career prospects open before "patriotic professional Circassians without complexes". But as a political tool used to transmit Russian influence to the Circassian world and to countries associated with it, the ICA no longer exists. It neither exists as an organization, which could be put in front of cameras for promotional purposes.

We should thank the current leadership of the ICA for that - after such an obvious "blowing cover" it is now much less harmful.