Circassian activists who work on the subject of repatriation expressed resentment to the politics of the Russian government against the Circassian refugees. 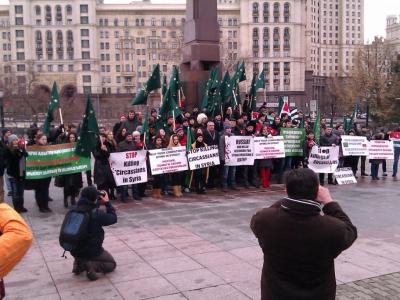 Yesterday on 13 Jul  Republic of Adygeya (Russian federation) absorbed about 150 refugees from Ukraine. Most of the refugees are of Russian origin. Absorption of refugees Adygeya began a week ago and today in the Republic about 1400 refugees from Ukraine. Adygeya government treats refugees. It puts them on a number of sanatoriums of the Republic where they get all the essential services for accommodation, food, medical services and others.

In the three years of war in Syria,left this country about 15000 Circassian refugees, of which only about 1500 were able to enter the Russian Federation. Most of these refugees were mainly entered Turkey and Jordan and some in Europe.

Russia's federal law explicitly states that all people in the Diaspora (not citizens of Russia), which belong to the origin of the indigenous people of the Russian Federation have the right to return to their homeland and the Russian government must take them in and help them integrate into the society. Although this law as Circassian activists noted Russian government  doing all the bureaucratic exercises to prevent thousands of Circassian refugees from Syria to return to their historic homeland.