Annexation of Crimea Spurs Cooperation between Crimean Tatars and Circassians

Cooperation between independent groups of activists may then become essential for all groups that are experiencing pressure from the government. 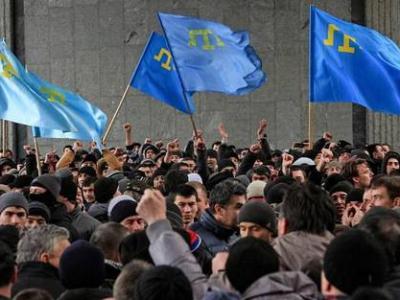 The historical trajectories of the Circassians and the Crimean Tatars are indeed strikingly similar. Both groups historically faced the consequences of the Russian Empire’s expansion and suffered serious losses at the hands of the advancing Russian armies. The Crimean Tatars turned into a minority in Crimea through a series of ethnic purges as well as the aggressive resettlement policies of the Russian Empire and, especially, of the Soviet Union. The Circassians were rendered a minority in their own homeland almost instantly after their final defeat in 1864 as the Russian Empire sought to assert control over the strategically important Black Sea coast. The Circassian population was deported en masse to the Ottoman Empire and Russian settlers quickly were dispatched to the northwestern Caucasus.

Besides promoting links between the Crimean Tatars and the Tatars in Tatarstan, the Russian government is trying to use the connections between the peninsula and the North Caucasus in order to incorporate Crimea into the Russian Federation more quickly. Last August, a delegation of Crimeans that included Tatars toured the North Caucasian republics. In November, a delegation of North Caucasians visited Crimea. Even though the delegations were mostly made up of civil activists, the purpose of their visit was quite clear from their rhetoric. As Karachay activist Aliy Totorkulov declared during the visit to Crimea: “We spoke to various representatives of Crimean Tatar organizations and I can assert with certainty that the Crimean Tatars are glad to transition into the Russian Federation. They have realized that Russia wants only good for them” (kavpolit.com, November 5).

Totorkulov is one of the few people who say that Crimean Tatars are happy to have ended up in Russia. Even the Russian mainstream media was surprised by the crackdown on the Crimean Tatars’ Milli Mejlis organization in September (mk.ru, September 17). Crimean Tatar leaders like Mustafa Cemilev have essentially been expelled from their homeland. Harassment of the media considered disloyal to Russia also has become quite common practice (BBC News, September 24).

The Circassians and the Crimean Tatars may indeed find common ground for cooperation. However, Moscow also may use its network of government sponsored Circassian NGOs in the North Caucasus to promote submission to Russian rule among the Crimean Tatars. At this point, the Crimean Tatars are still attracting the attention of the world community because of the ongoing hostilities created by the Russia-Ukraine conflict. However, once world attention diminishes, Russia’s crackdown on Crimean Tatar activists may be even harsher than it is now. Cooperation between independent groups of activists may then become essential for all groups that are experiencing pressure from the government.