Russian Brutality Unites Circassians in the Homeland and Abroad 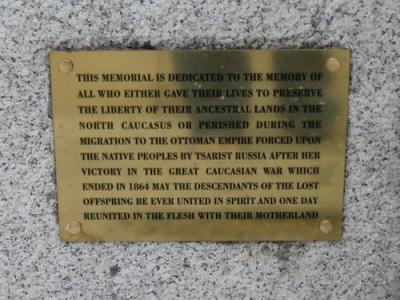 Staunton, December 17 – The brutal treatment of a Circassian activist by Russian security officers in the capital of Kabardino-Balkaria has energized and united Circassians in their North Caucasus homeland and in the diaspora across the Middle East, Europe and the US more than any Moscow action since the Olympics in Sochi, the site of the a Russian-organized genocide of the Circassian people in 1864.

Yesterday, 64 leaders of the Circassian community released a 500-word denunciation of Russian actions against Circassian activist Andzor Akhokhov who was arrested in February for leading a demonstration against the Sochi games and then tortured while in jail, something confirmed by medical experts after his release (cherkessia.net/news_detail.php?id=6504).

This demonstration of solidarity among Circassians, both the half million plus in the North Caucasus and the more than six million abroad, in response to Russian actions not only undercuts what Moscow has done to try to disorganize their movement but suggests that a growing number of Circassian leaders are now prepared to put aside their differences in the face of increasing Russian brutality.

The actions of the Russian security services, the declaration says, “flout” all the agreements Russia is signatory to with regard to human rights. “As usual,” it continues, “the Russian authorities showed anger, intolerance, intransigence and arbitrariness” in their actions last winter.

“Dozens of peaceful protesters were arrested merely for taking part in a serious and peaceful rally.” Akhokhov then suffered “traumatic brain injuries, concussions and electric shock burns” while in Russian detention.  And it is clear that these acts of torture were designed to send a message to the Circassians who are only seeking to ensure their “survival” as a nation.

The signatories “call upon those with a conscience to show their solidarity with Andzor Akhokhov” and demand that “the Russian authorities immediately end all harassment, bullying, discrimination, and abuse still occurring in his case and in those of other Circassian activists” in the North Caucasus.

Moreover, they “call upon all human rights organizations in the world, the governments of friendly countries, the European Commission for Human Rights, the UN Human Rights council and all the peoples of the world who yearn for freedom to defend the legitimate civil and human rights of the Circassian people and save it from oppression and tyranny.”