Circassian activists in the North Caucasus and elsewhere in the world are continuing to campaign for the improvement of their status in their homeland. However, the Russian government remains deaf to their demands, and the rhetoric of the Circassian activists is becoming more critical. 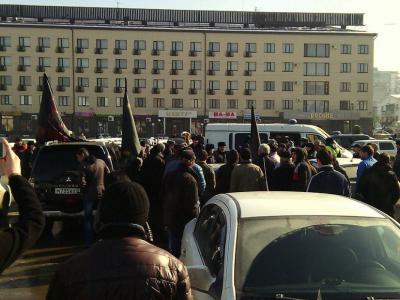 On December 16, Circassian activists issued a special statement in support of their colleagues persecuted by the Russian authorities in the North Caucasus. The appeal, signed by 65 politicians, writers, civil activists, businessmen and academicians from Turkey, Germany, the United States and several other countries, called on human rights organizations worldwide “to save the oppressed people from the clutches of oppression and tyranny” of Putin’s Russia. It accused the Russian authorities of launching a campaign of intimidation and persecution against Circassian activists in the North Caucasus. In particular, the statement focused on the travails of Circassian activist Andzor Akhokhov. The activist was arrested along with scores of others who peacefully protested the Winter Olympics in Sochi on the day it opened, February 7, 2014, and he was tortured while in police custody. The signatories of the document supported the attempts by Circassian activists in the North Caucasus “to inform Russia and the world that the Circassian question still needs to be resolved to restore the legitimate rights to their respective owners in accordance with international laws and norms” (Cherkessia.net, December 16, 2014).

Given the importance of the Olympics in Sochi for Russian President Vladimir Putin personally, the Russian government’s crackdown on the Circassian activists has been so strong that “established” Circassian activists have been unable to stage any public protests. Instead, a small group of relatively unknown activists, including Andzor Akhokhov, managed to protest for several hours in Kabardino-Balkaria’s capital, Nalchik, before they were dispersed and arrested. The Olympics in Sochi attracted some attention to the plight of Circassians, but after the Olympics were over, the Circassians attempted to use another important development to advance their interests—Russia’s aggressive policies toward Ukraine.

In 2014, Circassian activists appealed to the Ukrainian government to recognize the Circassian “genocide.” Circassians made the same appeal to the government of Poland in November 2014 (Cherkessia.net, November 11, 2014). Given Russian sensitivities about the events in Ukraine, the Kremlin is likely to regard Circassian activism as a dangerous nuisance and crack down further on local activists in the northwestern Caucasus.

Israeli activist Avrom Shmulevich noted President Putin’s preferential treatment of some peoples of the Russian Federation in comparison to the others (Avrom-caucasus.livejournal.com, December 18, 2014). At a press conference in December, Putin promised to support the Crimean Tatars, saying in response to a question by a journalist from the Crimean Tatar TV channel ATR: “The issue with the repressed peoples is a separate theme. The state has owed these people a lot. We must turn that page and only after that we can say that all are equal” (Kremlin.ru, December 18, 2014).

Regarding the Crimean Tatars, the Russian president has recognized that Moscow must do a lot to alleviate the consequences of Josef Stalin’s deportation of the Crimean Tatars in 1944. No such recognition exists regarding the Circassians and other ethnic groups of the Russian Federation that endured the heavy hand of the Russian conquest. The Crimean Tatars may temporarily enjoy favorable treatment by Moscow while the world’s attention is focused on the situation in Ukraine, but even they are unlikely to gain much from Moscow in the long run. Some Crimean Tatar activists have already been essentially expelled from their homeland while others have experienced Russian government pressure.