North Caucasians Complain About Shrinking Use of Their Native Languages

Even though minorities cannot openly challenge Moscow’s policies at this point, they seem adamant in defending their languages in the face of pressure from the central government. 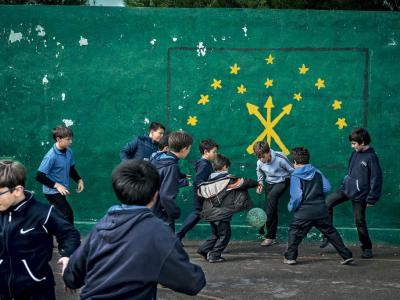 On March 19–20, a conference on the Russian language was held in the city of Stavropol (Dagminobr.ru, March 23). Like almost all conferences on language issues, it became quite politicized. While Russian officials pushed for Russian’s status as the country’s state language, the North Caucasian participants, especially those from Dagestan, emphasized that minority language issues are potentially explosive and should be treated with care. According to a recent poll, only 14 percent of the non-Russians in Kabardino-Balkaria speak to their peers in their mother tongue, while the rest use Russian (Kavkazskaya Politika, March 24).

The state’s refusal to accommodate minority languages frequently causes tension and even violent conflict. Activists in the North Caucasus are increasingly sounding the alarm that Moscow’s policies are resulting in the further degradation of their languages, despite declarations of support for native languages of the region. The mother tongue issue has a special dimension for Circassians given their large diaspora. The majority of ethnic Circassians reside outside the North Caucasus, their homeland, with most of them living in Turkey. Turkey’s Circassians are used to the Latin alphabet while the North Caucasian Circassians learn their language using the Cyrillic alphabet. A joint conference of Circassians in Istanbul earlier this year decreed that Cyrillic should be adopted as the common script for the dialogue between the Circassians in the North Caucasus and the Circassian diaspora. However, some Circassian activists note that Cyrillic was imposed on the Circassians by the Russians and is thus unsuitable for the language. Critics say that several sounds are replicated using combinations of three Cyrillic letters, while one even uses a combination of five Cyrillic letters (Natpressru.info, February 13). Some Circassian activists have begun working on a special Circassian alphabet that would account for the complex sound system of the Circassian language (Natpressru.info, January 22).

Several years ago, the United Nations agency for science, education and cultural advancement, UNESCO, warned that Circassian, Karachai-Balkar, Ossetian, Ingush, Chechen and other languages in the North Caucasus are in danger of extinction. Researchers listed 25 languages in Dagestan and pointed out that only 14 are officially taught in republican schools. The Circassian language is in danger of extinction not only in its homeland, but also within the diaspora in Turkey (Kavkazsky Uzel, February 25, 2009).

In a scholarly conference address last year, Madina Khakuasheva, a philologist from Kabardino-Balkaria, criticized the Russian government for raising false concerns about minorities’ low proficiency in the Russian language. According to Khakuasheva, the vast majority of Kabardins and Balkars aged 17 to 30 do not read books in their national languages, do not listen to the radio in their languages and do not attend ethnic theaters. The youngest poet in the Circassian association of writers is a 40-year-old man, the linguist said (Zapravakbr.ru).

According to the Russian constitution, Russian is the state language of the Russian Federation, but the autonomous republics within the country also have the right to designate their own state languages. In all, 89 languages are taught in schools throughout the Russian Federation, and a great number of them are in the North Caucasus. According to Dagestani experts, there are 32 languages in the republic. Even though only 14 languages have the “official” status, including Russian, the governor of the republic, Ramazan Abdulatipov, vowed to introduce all 32 existing languages to the school curriculum. In Karachaevo-Cherkessia, five languages are considered to be state languages of the republic, including Russian. Although the North Caucasus republics have attempted to introduce their languages into their school curriculums, they are taught as subjects, while Russian is the language of instruction in schools. Russian also dominates the media and the public sphere, which ensures that languages even in virtually mono-ethnic republics like Chechnya, with its over 95-percent ethnic-Chechen population, gradually degrade (Nazaccent.ru, May 1, 2014).

The indigenous languages of the North Caucasus are often proclaimed as “state languages” in the republics, but they practically never play such a role in reality (Kavkazskaya Politika, December 26, 2013). Earlier, Moscow cut the hours for state TV and radio programs in national languages, calling this a step in the “optimization” of their structures. Now these same proposals are being rolled out in regard to schools, where the number of Russian language hours is increasing at the expense of the minority languages.

The language issue appears increasingly important in the North Caucasus and in other minority-populated areas of the Russian Federation. It is not only the minorities who are complaining that their languages are dying: Russian officials are increasingly often calling for financial and administrative disincentives for the minority languages, such as cutting state funding for school instruction. The language issue is likely to be yet another contentious point between the North Caucasians and Moscow, as both sides appear to insist on receiving greater rights for their respective languages. Moscow appears to be concerned no less about spreading the knowledge of Russian than effacing the minority languages. Even though minorities cannot openly challenge Moscow’s policies at this point, they seem adamant in defending their languages in the face of pressure from the central government.