Historical facts about the Russian conquest of the North Caucasus are hard to deny, yet the Russian government appears intent on rewriting the history once again. 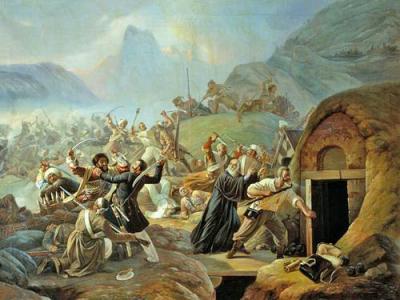 A struggle over history books appears to be unfolding in the North Caucasus. Moscow’s envoy to the region attacked North Caucasus universities for “falsifying history” at a meeting of governors of the North Caucasus Federal District, held in the city of Stavropol on March 20, devoted to economic and educational issues (Stav.kp.ru, March 20).

The deputy head of the North Caucasus Federal District, Mikhail Vedernikov, lashed out at the higher education institutions of the region. In particular, Russian officials were angry about the Circassian narrative of the colonization of their homeland by Russians. Vedernikov read out some of the exam questions for a Russian university branch in Kabardino-Balkaria, which stirred up anger in the audience. The questions included such expressions as “military-Cossack colonization,” “colonial policies toward Circassians,” “the Circassian genocide,” “the anti-colonial war in Kabarda,” among others. Moscow’s envoy to the region, Sergei Melikov, reportedly interrupted Vedernikov because he was so “disgusted.” Meanwhile, Vedernikov announced that the Kremlin’s Security Council will set up a special commission to review the contents of history books and license all future books on history (Kavkazskaya Politika, March 26).

Ironically, hardly any of the expressions that caused the Moscow envoy’s “disgust” are disputed in the scholarly community, with the exception of the term “the Circassian genocide,” which is a legal term, rather than a historical one. After Russian armies defeated the Circassian forces in the 19th century, they dispatched Russian military personnel and Cossacks to resettle the Circassian territory within several months of exterminating the locals. The same policy of resettlement and squeezing the locals were widespread across the North Caucasus. Even in relatively friendly North Ossetia, Russians first settled Ossetians in the lowlands to relieve their own forces fighting the Circassians and other less friendly peoples of the North Caucasus. However, after Russian rule was firmly established in the North Caucasus, the Ossetians were asked to squeeze themselves into smaller communities, and Cossacks and ethnic Russians were resettled on their territory (Batradz Berozov, Ossetians’ Resettlement from the Mountains to the Plains/Pereselenie Osetin S Gor Na Ploskost, Ordzhonikidze 1980).

So, a hierarchy was clearly present, as hostile aliens were the least preferred category of people in Imperial Russia, followed by friendly aliens, with ethnic Russians on the top. Ethnic Russians and non-ethnic-Russian North Caucasians had different social statuses according to Russian law up until the 1917 revolution, when social ranks were finally abolished. In the typical colonial fashion of the era, non-ethnic-Russian North Caucasians were officially designated as aliens (tuzemtsy) even though they still were considered to be subjects of the Russian Tsar.

Historical facts about the Russian conquest of the North Caucasus are hard to deny, yet the Russian government appears intent on rewriting the history once again. Instead of the Russian-Caucasian war, the term “Caucasian war” is used, as if the Caucasians were fighting each other or some other unknown force. Vedernikov also proposed reviewing the contents of museum expositions across the North Caucasus. Ethnographic museums often depict how the locals lived prior to the arrival of Russians, and probably either overly glorify the past according to the official Russian view or somewhat downplay the glorious Russian presence in the region. At the same time, Vedernikov himself inadvertently demonstrated the flipside of government control over educational institutions: He lamented the fact that the number of private Islamic religious institutions is growing while the few positions in theology at government-sponsored educational institutions remain unfilled (Kavkazskaya Politika, March 26). The lesson for the Russian government appears to be that the government-controlled curriculum of Islamic educational institutions repels potential students, who instead attend private Islamic institutions that have greater autonomy from the state.

The vociferousness of Russian officials about rewriting the history of the North Caucasus once again is likely to produce a negative backlash not only among the North Caucasians, but also among ethnic Russians. This can be seen in what had happened regarding monuments. The current situation in the region is that each side—the North Caucasians and the Russians—erect monuments to their own heroes. Moscow may potentially be able to force the North Caucasians to renounce their monuments, which is also questionable, but it is unlikely to be able to do the same with the Russians. While ethnic Russians glorify Tsarist Russian officers and generals, such as Aleksei Yermolov, Dagestanis, for example, elevate Imam Shamil and other heroes of the Russian-Caucasian war of the 19th century.

The fight over the historical legacy of the Russian Empire appears to be putting ethnic Russians and non-ethnic-Russian North Caucasians on opposite sides of the barricades. In early 2014, the authorities in North Ossetia rejected the idea of erecting a monument for a Russian soldier who fought the Circassians during the Russian-Circassian war. North Ossetian historian Ruslan Bzarov argued that after the 1917 revolution “the people of Russia have found a common homeland that no longer separates them into sons and stepsons” (Topwar.ru, January 30, 2014). However, many moves of the contemporary Russian government appear to support and justify Tsarist policies, including the state-sponsored racist policies of the time, which guaranteed ethnic Russians a higher social status in Russia as a whole and in the Russian colonies in particular.