Despite the Russian government’s reticence and attempts to drape the Circassian issue in a veil of silence, Circassians continue to come up with ways to increase their solidarity and to make their issues known to the public. The end of historical Circassia following the Circassians’ military defeat and expulsion from their land has become a rallying point for Circassians in the North Caucasus and abroad. 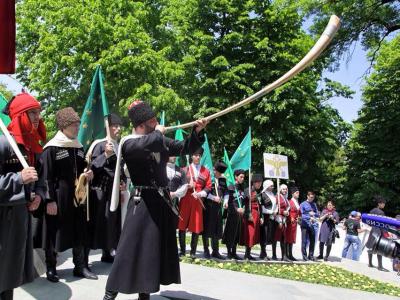 The annual Circassian Day of Remembrance and Mourning was marked, on May 21, by Circassians across the North Caucasus and outside Russia.

A large procession took place in Maikop, the capital of Adygea (Natpressru.info, May 22). An official rally also took place in Karachaevo-Cherkessia (Riakchr.ru, May 21). Perhaps the biggest rally of Circassians in the North Caucasus took place in Kabardino-Balkaria, the republic with the largest Circassian population. May 21 was declared an official holiday in the republic, and a great number of people there gathered to commemorate the day of mourning (Kavkazsky Uzel, May 21). A Day of Remembrance of the Victims of the Caucasian War and the Forced Exile of the Mountain Peoples of the Caucasus also was marked in the separatist Georgian region of Abkhazia. The Abkhaz are related ethnically to the Circassians and suffered similar deportations (Natpressru.info, May 21).

More and more Circassians are observing the day of remembrance for the Circassians and other victims of the Russian-Caucasian wars of the 18th–19th centuries. This year, a big delegation from Turkey, where the largest Circassian diaspora resides, took part in the commemoration. More than 120 Circassians from Turkey were invited to the North Caucasus to participate in this year’s commemoration (Natpressru.info, May 20).

The marking of the day of remembrance also encountered some obstacles. Rumors that Kabardino-Balkaria’s government was against the celebrations this year were spread anonymously (Natpressru.info, May 19). The Russian government’s more subtle policy of ignoring and suppressing information about the Circassian day of remembrance was exemplified in the words of the well-known Russian scholar Valery Tishkov, an ethnographer and former chairman of the Russian republican State Committee on Nationalities when Russia was still part of the Soviet Union. Asked about the relevance of the Circassian issue a century and a half after the end of the Russian-Caucasian war, Tishkov advised the media not to exaggerate the subject of the Circassian “genocide” and to cover more pressing issues (Nazaccent.ru, May 21).

In an article on the issue written last year, Tishkov repeated the long-held Russian propaganda line that the Circassians left their homeland voluntarily to resettle in the Ottoman Empire. Tishkov recast what Circassians themselves call the “Circassian genocide” as a “Circassian exodus.” In his article, the Russian scholar reverted to dubious assertions—writing, for example, that one of the reasons for the “voluntary” departure of Circassians from their homeland to the Ottoman Empire was that the Circassian nobility thought they would lose their serfs if they stayed inside Russia. Tsar Alexander II proclaimed the abolition of serfdom in Russia in 1861 and the Circassians were defeated finally in 1864 (Nazaccent.ru, February 3, 2014).

First of all, the claim that the Circassian nobility was afraid to lose their social status and chose to emigrate voluntarily is completely unsubstantiated and appears to be a modern invention. Secondly, and more importantly, even if it were true, it would apply only to a fraction of the Circassians. For example, the Circassian subgroup of Ubykhs, who lived on the Black Sea coast, had no hereditary nobility at all (Adygi.ru, November 20, 2014), yet most of them were deported from their homeland to the Ottoman Empire. The Ubykh nobility certainly could not have been scared of losing their privileges after Russian forces seized their lands since such privileges did not exist.

Predictably, the Circassian diaspora in Turkey marked the anniversary of the Circassians’ defeat with large-scale demonstrations and statements far bolder than their North Caucasian co-ethnics. The Circassians in Turkey staged a protest march against “genocide” and the expulsion of the indigenous population of the Caucasus launched by Tsarist Russia on May 21, 1864. Fikri Işık, a Turkish educator, politician, member of parliament for Kocaeli Province from the ruling Justice and Development Party, and the current Turkish Minister of Science, Industry and Technology, took part in the celebrations. “We remember the tragic events that began on May 21, 1864, in which 500,000 people were killed in the Black Sea and about one million people moved to our land and recognized it as their homeland.” Syrian Circassians living in Turkey as refugees called on the Russian government to allow the Circassians to return to their homeland and live in peace there (Natpressru.info, May 18).