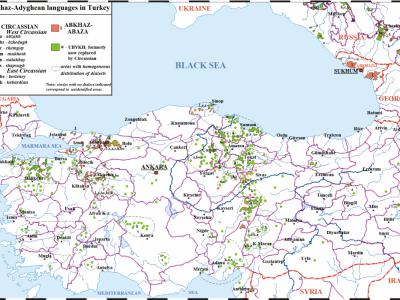 Staunton, June 23 – The Kremlin has called for a new study to determine whether the Crimean Tatars will be able to legitimately claim to be an indigenous people of Crimea, at least in part out of concern that Russia’s geopolitical opponents will use the issue of the Circassian genocide to put pressure on Moscow regarding Crimea, according to Yevgeny Minchenko.

The Moscow political scientist’s observation appears in today’s “Vedomosti” which carries a report about a new call for papers about threats to Russian national security by the Russian Presidential Administration (vedomosti.ru/politics/articles/2015/06/23/597522-administratsiya-prezidenta-zaplatit-za-prorabotku-novih-vozmozhnih-ugroz-natsionalnoi-bezopasnosti).

Among the topics the Kremlin is asking for studies, the paper reports, are the strategy for the development of the Eurasian Economic Union under new political realities and also an assessment of the prospects for the acquisition by the Crimean Tatars in a priority fashion of the status of the indigenous people of Crimea.”

The Kremlin plans to spend 13.3 million rubles (260,000 US dollars) on these projects, far less than the 46 million (one million US dollars) it spent on such studies in the competition it held a year ago. But as “Vedomosti” notes, this year, almost all the studies will be about foreign policy and focus on groups like the Crimean Tatars and the Circassian diaspora.

The Presidential Administration has asked those who want to compete for the grant to study the Crimean Tatars to focus on the issue of defining what is “an indigenous people” and to determine “to what degree the Crimean Tatars can count on the acquisition of such status” relative to other groups on the peninsula.

Moreover, the PA said, it wants the scholars to provide “not only exhaustive data on the political and social-economic status of the Tatars of Crimea but also to assess the possibility of the influence of the foreign Crimean Tatar diaspora on the social-economic and political life of the Crimean peninsula.”

“Such an analysis is not only needed in domestic Russian and Crimean political spheres but will strengthen the international positions of Russia in scholarly and general political discussions where opponents are trying to advance destructive anti-Russian ideas,” according to the scope note as reported by the Moscow paper.