Circassian Organizations at Odds With the Kremlin 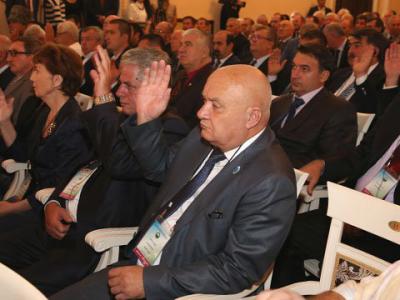 On September 19, a majority of those attending the International Circassian Association (ICA) conference in Nalchik, Kabardino-Balkaria, reelected Khauti Sokhrokov as head of the organization. Out of 73 delegates, 62 voted for Sokhrokov, 10 voted against and 1 abstained. Many Circassian activists, however, have expressed their disappointment with the ICA and plan to exit the organization and establish parallel structures.

Circassian delegates from Karachaevo-Cherkessia and Adygea, along with many Circassians in the diaspora, reportedly opposed Sokhrokov’s candidacy. It appears that the Russian government’s heavy involvement in the ICA’s activities precluded a change of leadership in what is often described as a dysfunctional organization. One of those who challenged Sokhrokov’s candidacy, Adam Bogus of Adygea, was detained by the Federal Security Service (FSB), in Krasnodar, region and kept under arrest until the ICA conference in Nalchik was over. According to Bogus, the government engaged in open arm-twisting of the delegates of the ICA, expelling Sokhrokov’s opponents from the conference or coercing their approval for the government candidate. As a result, the ICA has essentially fallen apart. Circassians from Karachaevo-Cherkessia and Adygea, in particular, have announced they have left the organization. Many Circassian activists abroad have also expressed their wish to start a new association (Kavkazsky Uzel, September 20).

Circassian organizations and activists have criticized the ICA for complicity with the Russian government’s demands and betrayal of the interests of Circassians. In 2014, Circassian activists came across Sokhrokov’s grant application for a project called “Containing ethnocentric ideology on the Internet with propaganda.” The activists then asked why, even if Circassian nationalism in fact needed to be “contained,” Sokhorkov did not discuss it openly, but tried to work against Circassian activists clandestinely. After these revelations, Sokhrokov and his deputy made a hasty trip to Turkey, where they tried to convince Turkish organizations of their devotion to the Circassian cause, but failed to do so. Sokhrokov and his entourage were on quite shaky ground in the run-up to the ICA conference in Nalchik. In order to prevent changes in the ICA, Kabardino-Balkaria’s governor, Yuri Kokov, reportedly held a closed-door meeting two weeks prior to the conference. Kokov’s message to the Circassian diaspora, which is primarily concentrated in Turkey, was that if the diaspora delegates derail Sokhrokov’s reelection, the government would stop all business projects of the diaspora in the republic and stop all student exchanges. The student exchanges in Kabardino-Balkaria are reportedly still under the control of an organization with ties to the FSB, just as they were under KGB control during the Soviet period. At the Nalchik conference, Sokhrokov reprimanded Ukraine for succumbing to the Maidan revolution. Circassian activists believe Sokhrokov’s aim was to attack the Ukrainian government in order to undermine the possible recognition of the Circassian “genocide” by the Ukrainian government (Szona.org, September 25).

Even though the government has achieved its objective and engineered the reelection of the much criticized Sokhrokov as ICA leader, many Circassian activists say the ICA is now a “corpse.” Circassian activist Beslan Kmuzov said that “from now on, the ICA’s statements do not represent anybody’s opinion, but the will of the Kremlin” (Szona.org, September 25). Another Circassian activist, Ibrahim Yaganov, told the Kavkazsky Uzel news agency: “I believe this organization has been dead since 2000. The Circassian community does not expect any results from tomorrow’s conference that could affect the future of the Circassian movement” (Kavkazsky Uzel, September 18).

Ostensibly pro-Russian Circassian activists like Asker Sokht from the Krasnodar region have denied that any Circassian group left the ICA (Kavkazskaya Politika, September 20). The ICA has defended its model of cooperation with the Russian government: its leadership has boasted of having received nearly $1 million over the past three years and allotting two-thirds of the money to help the Syrian Circassian refugees acquire homes in the North Caucasus. Apparently in exchange, the ICA supported the 2014 Winter Olympics in Sochi, which were opposed by a majority of the Circassian activists. The ICA also dropped its appeal to the Russian government in support of the Circassian refugees from Syria, in which it urged the government to accept more refugees from the Middle East. Instead of appealing to the Russian government, which actually has control over such issues, the ICA conference addressed the republican leaders of Adygea, Karachaevo-Cherkessia and Kabardino-Balkaria, who have no influence on this issue (Natpressru.info, September 25).

Circassian organizations appear to have entered a new period, drawing a line between the old structures that are under apparent Russian government control and independent organizations that can still contribute to the Circassian cause.