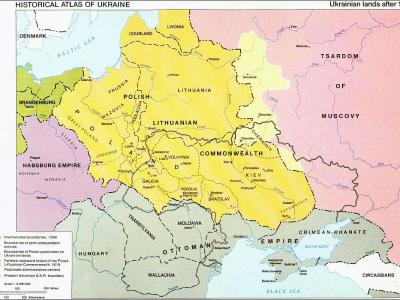 
The "Five Princes" came to Poland from the North Caucasian lands, between the rivers Terek and Kuban. That place was called "Piatyhorje" (five mountains in Russian). . In Tatar it was called "Beschtan", in reference to the Beschtan mountain, which has five tops. The lands, from this mountain to the west and to the east, were called Kabarda. It was the homeland of the Kabarday , tribes. In the 15th and 16th centuries these tribes formed an independent country called "Cherkassy" in Russian and "Petyhorcy" in Poland-Lithuania. From one side their border reached the Krym Tatars and from the other side the Temruk tribes. Although Kabarda was independent, it had close ties with the Crimean Tatars, who often used Kabardian warriors in wars against their neighbours. In the years 1555-1560 Kabarda came under Russian rule.

It was in the year 1556 that the Ukrainian prince Dymitro Wisniowiecki (grandfather of Michal-Korybuth Wisniowiecki, who became king of Poland 100 years later), left Poland (Poland, Ukraine, Belorussia and Lithuania were one country at that time) and came to Russia to fight the Crimean Tatars. He had many successes with his Cossack army. He was the first Cossack and founder of the Zaporozha Cossacks! Tsar Ivan the Terrible appointed him as wojewode (governor) of Kabarda. Prince Dymitro and his Cossacks stayed in Kabarda for several years and ruled the land in a benign and tolerant manner. He won over many Circassian warriors.

In 1561, Tsar Ivan decided to attack Poland. That made it difficult for Prince Dymitro to stay in Russia. He went back home to protect his country in the Ukraine. This move made the Tsar very angry. It is reported that he said, "Dymitro came to us as a dog and left us as a dog." But that was the first of his problems. Eventually, prince Dymitro Wisniowiecki was captured in Moldova in 1563 and sent to Istanbul, where he was executed for his attacks on the Tatars.

A few months later, a group of Circassian princes, who were on friendly terms with Dymitro Wisniowiecki, and who were opposed to Russian rule in Kabarda, dispatched a number of their warriors to poland to ask for help. These princes were marked for death by the Tsar. In August 1561, the Polish king granted "Iron Letters" (and wrote in the King's Book"), to all the "Petyhorcy" warriors who wanted to come to Poland.

In 1562, five Kabardian princes left their homes in the Caucasus and escaped to Poland, together with their families and warriors (Polish writers from that era claim that there were 300 warriors). The Polish king welcomed them with much honours and presents, which made them very satisfied. The names of these princes were as follows:

The Russian Tsar realized that by this move he has lost very good warriors to his enemy, Poland. This made him even more angry.. He sent his envoy Aleksiej Klobukov to Poland to win the princes back, but the "Petyhorcy" princes gave him the cold shoulder. Most of the Circassian immigrants were already Orthodox Christian, but some of them were still pagan. Later, the progeny of the warriors became Ukrainian/Orthodox, whereas those of the higher classes became Polish/Catholic.

Solgien and Temruk became commanders of special "Petyhorcy/Cossack" regiments in the Polish army. But it was Temruk who showed the best qualities of a Circassian commander. There are many documents that testify to his heroism. Example: "On April 13th, 1572, when a strong Turkish army attacked the Polish forces in Moldova, all Polish troops deserted the battlefield in panic, only Temruk with his "Petyhorski" regiment stayed and fought till the Polish troops recovered and came back to stop the Turks."

His feats of valour did not go unrewarded. The Polish Sejm (government) and King bestowed upon him the "Indygenat Polski", which ranked him among the Polish aristocracy. He was granted large estates in Lithuania and Kievan and Podolian Ukraine.

As time went by, the five Circassian princes became more powerful and rich. They all settled in the Podolie region of Ukraine. Every year, fresh Circassian warriors went to Poland to join the special Petyhorcy/Cossack regiments. After a few years, these regiments became an integral part of the Polish army, until 1795, when Poland was occupied and divided by Russia, Prussia and Austria. After the passing of the Circassian princes who established these regiments, and after the loss of Polish independence, the number of Circassians dwindled, the balance being made up by Polish, Ukrainian and Tatar soldiers. However, the regiments kept their Circassian appearance and characteristics: the customs, weapons and battle tactics. Nowadays, Polish historians admit the enormous influence that the five princes exerted on the evolution of the Polish army.

The progeny of the Circassian princes have been assimilated into Polish society. But they kept their temperament and their willingness to fight, especially against their mortal enemies, the Russians. When the Russians occupied the Ukraine, the Polish Circassians lost everything.