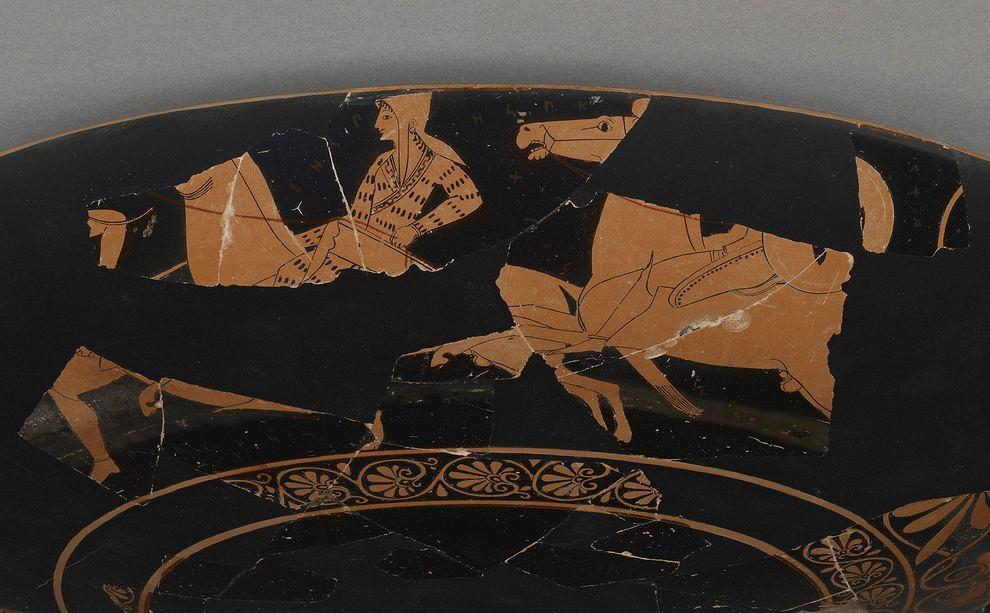 This Greek cup, dating from around 510 B.C., depicts an Amazon warrior on a horse. Scholars suggest wording on the vase names the woman Worthy of Armor in ancient Circassian.

In the forthcoming study of pottery dating from 550 B.C. to 450 B.C., study lead author Adrienne Mayor and J. Paul Getty Museum assistant curator David Saunders translated Greek inscriptions into their phonetic sounds for 12 ancient vases from Athens. The inscriptions appear next to scenes of Amazons fighting, hunting, or shooting arrows.

They next submitted just the phonetic transcriptions without explanation to linguist John Colarusso of Canada's McMaster University in Hamilton, who is an expert on rare languages of the Caucasus. He translated the inscriptions into names—such as Princess, Don't Fail, and Hot Flanks—without knowing the details of the pictures of Amazons.

The report in the journal Hesperia gives linguists unparalleled insight into languages last spoken more than 2,500 years ago around the Black Sea. This area was the realm of Scythian nomads, who fought and traded with the Greeks.

Essentially, the ancient Greeks seem to have been trying to re-create the sounds of Scythian names and words on the Amazon vases by writing them out phonetically, the study authors suggest. In doing so, the Greeks may have preserved the roots of ancient languages, showing scholars how these people sounded on the steppes long ago.

"I am impressed, and I find the conclusions quite plausible," says archaeologist Ann Steiner, an expert on ancient Greek vases at Franklin and Marshall College in Lancaster, Pennsylvania, by email. The results give weght to the suggestion that Athenians first learned of Amazon legends and names from foreigners in their midst, she says.

Amazons were thought to be solely mythological until archaeologists unearthed Scythian burials of real women warriors, says Mayor, a visiting scholar at Stanford University and author of the just-released The Amazons: Lives and Legends of Warrior Women Across the Ancient World.

"Amazons were clearly exotic and exciting to the Greeks. Clearly there is respect and admiration mixed with ambivalence," says Mayor. "Women lived much more separate and unequal lives in the Greek world, so the notion of women who dressed like men and fought like them was pretty exciting to them."

The other figures shown, such as Hercules and Achilles, were also named on the vases, leading the researchers to think the Amazon labels were meant as names, not descriptions.

The names were probably nicknames or heroic appellations given to Amazons, rather than real family names. Even today, Colarusso says, speakers of modern-day languages in the Caucasus region often use public, descriptive nicknames rather than reveal their real names.

Vases from Athens were a hot commodity in the fifth and sixth centuries B.C., traded across the Mediterranean. Often they held wine or were used as decanters during symposia, celebratory drinking parties for men. The vases were often painted with legendary scenes intended to provoke debate at the event, and a minority were inscribed with words. 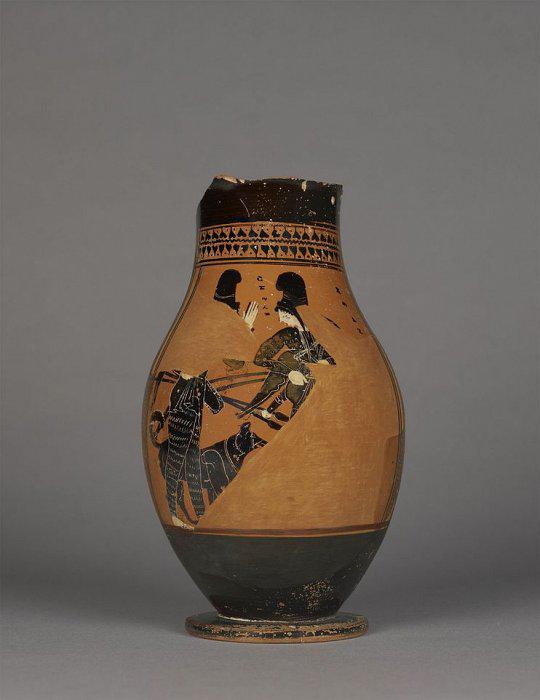 More than 1,500 vases preserved from the era contain "nonsense" inscriptions that mostly use combinations of Greek letters but don't form words in ancient Greek (an analogy in English would be "dosud" or "hisme," which use the Latin alphabet but don't form meaningful words). Some of these also include depictions of women warriors.

Athenians had a long-running fascination with Amazons and began depicting them in art before 550 B.C., says the Getty's Saunders, a study author. After a Scythian incursion into Thrace, the region north of Greece, Amazons were more often shown wearing Scythian tunics, trousers, and hats, sitting on horses and carrying bows and axes.

Mayor realized the images on the vases matched clothes found in Scythian burials. "It all started from a hunch," she says. "What if these illiterate gibberish scribbles on ancient Greek vases depicting Amazons and Scythians meant something?"

Game of the Goose

To find out, Mayor first asked Colarusso, an expert on rare languages such as Circassian, Abkhazian, Ossetian, and Ubykh, to translate nonsense inscriptions on a javascript:void(0)vase that didn't have images of Amazons.

"I had goosebumps when I realized we were really deciphering sounds perhaps 3,000 years old," Colarusso says now.

The goosebumps came, in fact, from the New York Goose Play Vase, now in the Metropolitan Museum of Art in New York. The vase, dating to 400 B.C., depicts a scene involving a policeman and a dead goose in a basket.

On the vase, some characters speak decipherable Greek phrases, but the policeman says something that sounds like "noraretteblo," meaningless in Greek. Colarusso, blind to the scene on the vase, translated the phrase into "This sneak thief steals from the man over there" in ancient Circassian.

Remarkably, Athens is thought to have employed Scythian constables in the era of the lost play depicted on the vase, suggesting the Greeks depicted foreigners they were familiar with.

"Deciphering that very exact phrase told me we had something," Colarusso says. The languages of the Caucasus region still contain words with repeated hard, friction-filled sounds, such as "kh," he says, making them diagnosable as archaic Scythian sounds rendered phonetically in Greek phrases on the vases.

In other instances, Colarusso translated words that are nonsense in Greek into phrases from other, archaic dialects. For example, without seeing the image on a vase depicting a Scythian archer next to a dog, he translated the inscribed words into "the dog is sitting by him."

"They've taken a great deal of trouble to make it a really convincing case," says classicist Anthony Snodgrass of the University of Cambridge in the United Kingdom, who was not on the study team.

The only limitation of the study, Snodgrass says, is the small number of vases used in the research, a dozen of the 1,500 known.

"It all raises a lot of questions: Why would the Athenians want these phrases on their vases?" Saunders says. Many of the vases were exported to northern Italy, where Scythians must have been quite rare, and were found in Etruscan burials there.

All in all, the translations point to the wide interconnection of the ancient world, he says, where Bronze Age trade routes were used to carry goods from Iberia to Siberia.

"It certainly has made me a lot more careful about what I call nonsense," Saunders adds.