Circassians in Turkey have grown bolder in speaking out about their 19th-century suffering and exile, irritating Russia and straining diaspora organizations. 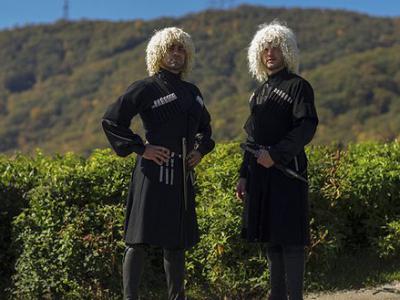 Unprecedented commemorations have been organized in Turkey this year to mark the 150th anniversary of the great tragedy that befell Circassians under Tsarist Russia and drove 1.5 to 2.2 million people to Ottoman lands.

The commemorations had started as small events on Kefken Beach, 168 km k(104 miles) from Istanbul, where mourning descendants threw black carnations in the Black Sea near a cave that sheltered some of the first exiles who managed to reach the Turkish shore. But much to Russia’s irritation, the commemorations have now spread to big cities and urban squares in Turkey, where the Circassian community numbers more than three million.

On May 19, the Russian ambassador in Ankara, Andrey Karlov, received representatives of the Circassian diaspora and offered them an olive branch. Sources told Al-Monitor the envoy said that Russia saw Circassians as its own diaspora and their problems as its own. He offered dialogue to resolve disagreements, proposed organizing joint conferences and asserted Russia was ready to face up to its past, the sources added.

The ambassador and the delegation, led by the head of the Federation of Caucasian Associations (KAFFED), came together in the midst of a stormy period.

The Circassians have been growing anxious for some time. The anxiety stems from mounting Russian hostility to commemorations of May 21, 1864, as Exile and Genocide Day, ire that peaked during the 2014 Winter Olympics in Sochi, the area where the genocide occurred. To rein in the diaspora, Moscow has been using civic groups such as the International Circassian Association (ICA), which is under Russian influence, as well as prominent Circassian business people. Those who refuse to toe the line face obstacles during travels to the Caucasus.

Take, for instance, Yasar Aslankaya’s case. As head of KAFFED, the umbrella organization of Turkey’s largest Circassian groups, Aslankaya attended the ICA board meeting on March 29, held in Nalchik, the capital of Russia’s Kabardino-Balkaria autonomous republic. During his stay there, he faced warnings he might not be allowed to the Caucasus again and was followed throughout Nalchik, with intelligence services on watch even at the door of his hotel room.

It should be noted that KAFFED has been criticized for going too far in accommodating Russia’s sensitivities and for shying away from advocacy that could irritate Moscow. A significant part of the diaspora is strongly critical even of KAFFED’s membership in the ICA, which has been accused of operating as Moscow’s puppet ever since its independent Circassian leaders were purged in 1999.

Yet, even KAFFED was crossed out earlier this year when it dared to hold a put-out-the-Olympic-torch demonstration outside the Russian Embassy in Ankara. KAFFED officials who used to be in direct contact with the ambassador tried for some time to get appointments.

Aslankaya told Al-Monitor he relayed the following message to the Russian envoy at their latest meeting: “Not only have you failed to deliver your promises, but now we face threats and bullying in the Caucasus. Russia is unable to tolerate any criticism. And when we keep silent, we lose our support base. If you are not going to address our problems, we’ll take our demands to international platforms. Even the students we sent to the Caucasus have had their scholarships cut. This can no longer go on like this. Russia has to acknowledge the historical tragedy and remove barriers to reconnections with the homeland. Prime Minister Recep Tayyip Erdogan’s condolence message to Armenians generated a very positive response. Russian leader Vladimir Putin could take a similar step. The diaspora had welcomed former President Boris Yeltsin’s statement on May 18, 1994, when he said, 'The problems we inherited from the Caucasian War, and in particular the return of the descendants of emigrants from the Caucasus to their historical homeland, should be resolved.' Twenty years have passed with no progress at all. We believe that recognizing the Circassians’ suffering, sharing their pain and resolving historical problems can be possible through direct dialogue at the 150th anniversary of the end of the Caucasian-Russian wars. The acceptance of these demands will boost our people’s trust in the Russian Federation.”

At the meeting, the sides agreed to meet every two months to discuss the problems. Yet, Aslankaya remains pessimistic that this effort at dialogue will produce concrete action on the ground.

Meanwhile, plans to hold an international conference in Istanbul either in May or September under the auspices of the Circassian Associations Federation, another umbrella group, came to naught as ICA threw spanners into the works.

Murat Yalcin from the Istanbul Circassian Association, which is part of the federation, complained of persisting Russian interference. “We are under Russia’s indirect pressure. They take every opportunity to convey their discontent over our activities,” Yalcin told Al-Monitor. “We use a very measured language. We demand the recognition of the exile and genocide. Yet, certain attempts were made via influential diaspora figures to end especially the demonstrations we hold outside the Russian consulate in Istanbul on the 21st of each month to call for the recognition of the exile and genocide.”

Despite the pressure, a large crowd gathered outside the consulate on May 21 for the latest commemoration event.

Erdogan Boz, a board member of the Ankara-based Circassian Association, is irked by KAFFED’s policy of accommodating Russia, even though his group is a driving force within KAFFED. In remarks to Al-Monitor, he complained of Russian manipulations, saying, “Manipulative attempts have been on the rise, especially since opposition mounted against the Sochi Olympics. ICA and KAFFED have become a vessel for those attempts.”

In contrast to KAFFED, the Circassian Association is lifting its voice, willing to heed diaspora sensibilities, Boz said. Their key demands include recognition of the 19th century events as genocide, recognition of the right to repatriation and concrete measures to facilitate the return.

Back in July 1997, at the general assembly of the Unrepresented Nations and Peoples Organization (UNPO), the ICA called for the acknowledgment of the genocide, the Circassian people’s recognition as a nation in exile and a guarantee of repatriation to their historical homeland. Yet, the ICA not only failed to pursue its demands, but turned into an organization seeking to quiet anti-Russian sentiments in the diaspora.

The outbreak of the Syrian war rekindled the issue of repatriation. Adige Khase, a civic group in Russia’s autonomous Republic of Adygea, petitioned the Kremlin, the Foreign Ministry, the Duma and the Federation Council in a bid to pave the way for Syrian Circassians’ return to their homeland, but all its applications were rejected.

In sum, the more Circassians lose their language and culture, the more their civic groups step up demands related to their homeland and grow interested in it. The Circassian Association’s fallout with KAFFED, the very group it co-founded, and KAFFED’s fresh tensions with the ICA and Russia, are all repercussions of the mounting pressure from awakening grassroots. And the more the grievances are voiced in the streets, the more they reverberate in Turkey and prompt Russia to step up manipulative moves. Look no further to find out why Russian diplomats have just discovered Circassians as their “own” diaspora.

Fehim Taştekin is a columnist and chief editor of foreign news at the Turkish newspaper Radikal, based in Istanbul. He is the host of a fortnightly program called "Dogu Divanı" on IMC TV. He is an analyst specializing in Turkish foreign policy and Caucasus, Middle East and EU affairs. He was founding editor of Agency Caucasus.