Circassians in soul searching in 150th year of Turkey exile

It is the time for the Circassians in Turkey, who have distanced themselves from Chechens and Ingush because of the latter’s Islamism and radicalism, to ask for basic rights from the state, says Çelikpala (L). 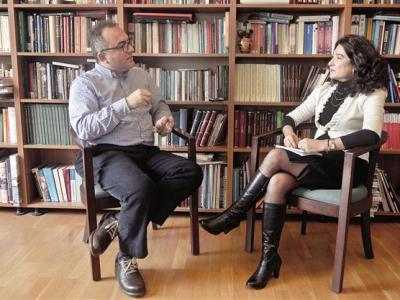 Circassians in Turkey are increasingly looking to gain rights from the state amid a process of questioning their identity and their place between Ankara and Moscow, according to a professor of international relations at Kadir Has University.

“They look at Kurds and say: ‘They fought and got their rights. If we stay silent we have no chance,’” said Mithat Çelikpala in a recent interview.

What happened 150 years ago?

Circassians were exiled from their homelands by Russian forces. It was a reflection of Russian expansion toward the Caucasus; all those North Caucasians were seen as a threat because of their position. Before, Circassian lands were under the control of Ottomans but technically they were independent. As the Ottomans were not strong enough they accepted Russian control of those regions. They also accepted the arrival of Circassians in order to balance other minorities first in the Balkans and in Anatolia.

It seems that with the establishment of the Soviet Union, all those exiled realized that it would be very hard to go back. Can you give a short summary of what happened in the last 150 years?

The political leaders of the Circassians were asked to be silent with the establishment of the Turkish Republic because the new republic needed to establish good relations with the Soviets. So up until the 1990s, all those Caucasian communities were rather silent and their associations dealt with cultural events. The main diaspora groups started to be assimilated in the early Republican years; most accepted it voluntarily because this was the last resort. They realized that they couldn’t go back, a Muslim country and a safe heaven.

So Circassians started to become part of the state, the establishment. They were politicized in parallel to Turkish politics: left-wing, right-wing, religious, non-religious. This prevented them from having a unified body, and this is the reason why we have different diaspora organizations currently.

Who are the Circassians?

This is the big question. When they came to Anatolia, Ottomans labeled everyone Circassians, but this encompassed all groups from the North Caucasia – the Adyghe, Chechens, Ingush, Abkhaz and Kabardians, which were ethnically different then each other.

After the collapse of the Soviet Union and as north Caucasian states emerged as different entities, the diaspora realized they were different from each other and a discussion was triggered on who the Circassians are. In Turkey, mainly the Adyghes call themselves Circassian and they have tried to remove others from the Circassian umbrella. Abkhazian independence and the Chechen issue has affected this process. Initially, all groups were united against Russia. But Chechen identity became more Muslim, and Circassians started to distance themselves from Chechen and Ingush because of their Islamism and radicalism.

So Chechens started their own organizations to serve the Chechen cause. On the Abkhaz issue, initially Caucasians were united to defend the Abkhaz cause. But when Russiarecognized Abkhaz independence 2008, divergences emerged. Abkhaz in Turkey established their own separate organizations to support the interests of the Abkhazian state which overlaps with those of Russia; yet other communities like the Adyghe are anti-Russian. So what happens in North Caucasus is reflected in the Caucasian diaspora in Turkey.

Circassians, in time, came to important decision-making positions. How has their presence affected relations with Russia, especially after the collapse of the Soviet Union?

Circassians were very well-educated; they had no land, so they needed to show themselves. The only, but best, option was to serve the state in which they took refuge. The end result was assimilation. Currently Circassian associations are discussing the effect of this assimilation since only 10 to 20 percent can speak their mother tongues.

In the first half of the 1990s, Turkey turned a blind eye to groups that mobilized support for those fighting against Russians like in Chechnya. After 1993, Moscow established control over the North Caucasus, and Turkey started to have its own issue with the outlawed Kurdistan Workers’ Party (PKK); Russians were successful in playing this card against Turkey. Turkey stopped turning a blind eye to activities that could be seen as anti-Russian. Accounts were frozen; only humanitarian camps were opened to look after those fleeing the war. But in parallel to this development, the transformation from exile identity to diaspora identity started, meaning Caucasians started to gain a political identity.

Associations started to transform from cultural to political organizations especially in the second half of the 1990s. Actually in the early 1990s, Turkish decision-makers were more open to demands coming from them because there was no lobbying activity to support the Russian cause, but with the increasing activities of Turkish construction companies and energy relations, the attitude of the Turkish state changed because Turkish-Russian relations are more important than North Caucasian groups. This further sped up the politicization of the community in order to be able to raise the Circassian cause.

Now the question is this: should they only deal with the issues about their motherland and work for that in Turkey and in international platforms or, in parallel to the democratization of Turkey, should they work to secure their rights?

You claim that the conference that was organized recently on the anniversary of the exile was very important.

Turkey’s nation-state identity and territorial integrity is very important for the Circassians. They used to not like the Kurds or the concept of human rights; they saw this as a betrayal. They thought, ‘This state gave us refuge; if we deal with these kind of issues, we will be identified with the separatists group.’ This was the position up until three, four years ago. But what they have been witnessing is this: Kurds are being represented in Parliament, and they have started to secure their rights. Circassian associations understand that they are not part of the establishment. The state’s interests are different than Circassian interests. This is the time to ask for basic rights from the state since it does not give those rights voluntarily; they learned it from the Kurdish movement. Obviously, the distance with the state is still narrow. The conference was sort of revolutionary since for the first time, it was open to mainstream human rights movements. are learning how to defend group rights and how to demand them from the state. Representatives of all political parties were invited for the first time political parties. The parliamentarian from the Peace and Democracy Party (HDP) talked of the Kurdish political movement and the audience was receptive. This would have been impossible 10 years ago. The representative of the ruling party, while Circassian in origin, spoke as the voice of the state, sparking criticism from the audience.

Can we talk of a Circassian revival?

Not really. Circassians want to keep their identity as good guys in the eyes of the state. They are critical but understand Turkey’s position toward Russia. They want Turkey to have a more balanced approach to Russia. They are citizens of the Turkish Republic; they want to live in Turkey but want to keep their contact with the motherland as a sort of dual nationality. They are also pushing Turkey to be more modern in terms of basic human and group rights. There is rather a soul searching. They look at Kurds and say: “They fought and got their rights. If we stay silent we have no chance.” Some, though, also believe it is not good to get on the Kurdish bandwagon, saying they have to start from somewhere .

In what sense will it affect Turkish-Russian relations?

The relations are so intense it won’t have much of an effect. In addition, Caucasians are divided, so it’s good for Russia as well as Turkey, too, because instead of dealing with a large group, they are dealing with smaller groups.

Dr. Mitat Çelikpala is Professor of International Relations at Kadir Has University, Istanbul, where he teaches graduate and undergraduate courses on Eurasian Security, Turkish Foreign Policy and Caucasus politics, security and history, and supervises doctoral dissertations in these areas. His areas of expertise are the Caucasus, North Caucasian Diaspora, people and security in the Caucasus and Black Sea regions, Turkish-Russian relations, energy security and critical infrastructure protection.

In addition to Kadir Has University, Çelikpala lectures at Bilgi University, the Turkish War College and the Turkish National Security and Military academies on Turkish foreign policy, politics, history and security in the Caucasus and Central Asia, and Turkish politics. He has published a number of articles in the media and in academic journals on these subjects.