Circassians call out to Putin and criticize his hypocrisy as he labels the Armenian incident as genocide when failing to recognize the Russian tsarists massacre of Circassia. 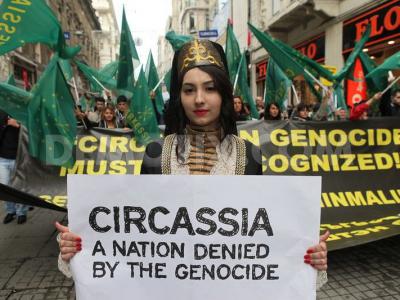 Halis Din, Circassian Association Federation Board member has critcized the use of the term "genocide" referring to the 1915 incidents by Russian President Vladimir Putin. In a written stement, he has said that Putin's use of the word "genocide" and with Putin not participating in the Yerevan programme has caused a backlash in Turkey.

Each year on the 21st May, thousands of people gather in front of the Russian consulate to protest, with this year's organisation already under way to object to the genocide reference. In his statement to Putin, Din has said that "Russia needs to confront their own histrory, recognise the murder of Circassians as genocide and compensate them for their exile" referring to the period between 1763-1864 when Circassians as well as those from the Caucasus region were face to face with the massace of Russian Tzarist regime.

In this time period, more than a million people were massacred and an equal number were sent to exiled from their homeland. Din also said that "The repatriation of our people to their homeland has been denied for a very long time. The massacre of the Circassians was the latest ring despite our objections during the Sochi Winter Olympics. For 151 years the Circassians have been away from their homeland and living in exile. The heir of the Russian Tzarist regimes have smoothed over the cracks as a form of policy. We are calling out to Putin, and the entire Russian government to open up the archives, recognise the Circassian genocide, and compensate for the genocide and the exile that continues today. We call out also to Turkey to recognise us and give us dual nationality".