According to Natalya Zubarevich, the Kremlin is, in fact, likely to increase the support of the most violent republics of the North Caucasus at the expense of less violent ones. 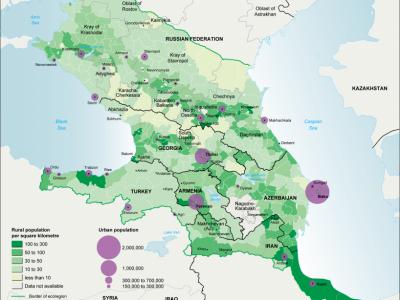 “No money in the federal budget no happiness in the republics of the North Caucasus,” Russian economic geographer Natalya Zubarevich told the Kavkazsky Uzel website. According to the expert, from January to October 2014, the North Caucasus republics received the bulk of their budget funds from Moscow. Ingushetia received 83 percent, Chechnya—82 percent, Dagestan—70 percent, Karachaevo-Cherkessia—65 percent, North Ossetia and Kabardino-Balkaria—55 percent each. In 2014, the budgets of the North Caucasus republics still had a surplus, but even then the financial injections by Moscow were reduced from the previous year. In 2015, the experts predict a sharp downfall in the revenues of the regional budgets and the central government’s ability to fund them (Kavkazsky Uzel, January 1, 2015).

According to Zubarevich, the regional economy in the North Caucasus consists of two main parts. One is made up of money from the budget that is habitually misused through various illicit schemes. The other is made up of the revenues of local entrepreneurs who also often use tax evasion as a competitive advantage tool and sell their products to the locals and to the population of greater Russia. Budget resources are projected to decrease along with the purchasing power of their customers, so both parts of the North Caucasus economy will be affected negatively by the economic downturn in Russia. In this situation, the economist said, Moscow is most likely to send more resources to those republics of the North Caucasus “where there is more shooting.” Nearly a 25-percent increase in money transfers was reportedly promised to Chechnya already. The less troubled republics will have to share their resources with the newly annexed Ukrainian territory of Crimea (Kavkazsky Uzel, January 1).

The North Caucasus has traditionally received lavish financial support from Moscow. The Russian government exchanged financial assistance to the region for the loyalty of local elites that provided a semblance of stability. If Moscow’s ability to provide funds to its North Caucasian loyalists decreases, they may become less responsive to the requests of their patrons in the central government. Separatist trends in the North Caucasus may then manifest themselves more strongly, prompting Moscow to revert to using more military force and more conflict in the region or to yield to the demands of republics for greater self-rule.

Another aspect of the economic downturn is the disparity between the financial assistance to the North Caucasus, on the one hand, and many regions that have a predominantly ethnic-Russian population, on the other. The once popular slogan “No More Feeding the Caucasus” indicated that ethnic Russians are increasingly annoyed by essentially having to pay to keep the region inside the Russian Federation. Even democracy champions in Russia, such as Aleksei Navalny, stated that there should be a discussion about “why citizens of the country should feed those brazen bandit elites who now run the North Caucasus. All the regions of the Russian Federation are equal. But still some regions of the country are more equal than others” (Ekho Moskvy, October 22, 2011). Although the reports about conflicts between ethnic Russians and non-ethnic-Russian North Caucasians have subsided since the start of the war in Ukraine, economic hardship could easily revive them. As the budget pie is certain to shrink even further, the fight over who receives how much is also likely to intensify.

According to Natalya Zubarevich, the Kremlin is, in fact, likely to increase the support of the most violent republics of the North Caucasus at the expense of less violent ones. “I have noticed an interesting relationship: when more shots are fired in one of the republics of the North Caucasus, more funds flow to that republic. The republics might start competing for the funds from the central government, using this trick,” Zubarevich said (Kavkazsky Uzel, January 1, 2015).

Another North Caucasus–specific economic problem, one which is less known to the public but that regularly affects the region, concerns retail energy consumption. North Caucasus republics have accumulated a large backlog of payments for natural gas and electricity. Nearly 80 percent of the payment backlog for natural gas among the Russian population is concentrated in the North Caucasus. The worst situation was reported in North Ossetia, Kabardino-Balkaria, Dagestan and Chechnya. The population of Dagestan alone has a backlog of payments for supplied natural gas equaling about $300 million. In 2014, Dagestan’s payment backlog rose by 16 percent despite the government’s attempts to stimulate payments from customers (Kavpolit.com, November 25, 2014).

Energy supplies in the North Caucasus are not as trivial as they may seem. Before using the energy weapon in foreign policy, Moscow tried the weapon in domestic politics in the North Caucasus, where the supplies of gas and electricity were manipulated (ITAR-TASS, April 10, 2014) to make the separatist-inclined region highly dependent on Moscow. The reverse side of that dependency, however, is that Moscow now has to supply gas and electricity often for free, because if it cuts supplies it will practically be seen as a de-facto separation of the North Caucasus from Russia.

Russia’s economic downturn is likely to have a major impact on the North Caucasus. While experts find it hard to predict exactly what will happen and how Moscow will react to the challenges in the region, it is clear that the region will be a serious financial liability as the country is experiencing an economic downturn. The desire of many Russians to distance themselves from a culturally different and economically burdensome region is likely to manifest itself strongly once again.