Even modest attempts by Circassians to reclaim their own history produce a disproportionally harsh response by the Russian government, which is not conducive to a stable resolution of existing differences. 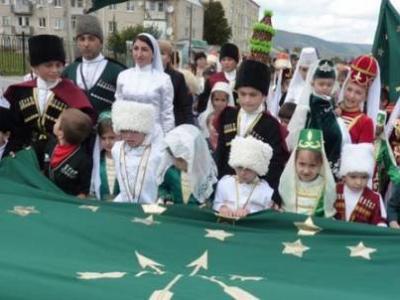 Circassian villagers in Krasnodar region have come under pressure from the authorities for campaigning for the Circassian cause. Even school age children have reportedly been harassed by the authorities, sparking an uproar among Circassian activists. The first reports about the questioning of children by the police emerged on July 28, when police gathered parents with their children in the Krasnodar region village of Bolshoi Kichmai and questioned them about their participation in a May 21 remembrance ceremony for the victims of the Russian-Circassian war. The principal of the school in the village, Marzet Alieva, told the Kavkazsky Uzel website that the school children have participated in marking the end of the Russian-Circassian war every year during the past two decades, but the authorities only raised the issue with the school, the parents and their children this year, for the first time (Kavkazsky Uzel, July 31).

The timing of the police descent on the school was also unusual, given that it took place in July, during the school vacation. The police asked the schoolchildren whether they had voluntarily participated in marking the end of the 19th century Russian-Circassian war, what they thought about this issue and whether their parents forced them to attend these events against their will. The police officers themselves were ethnic Circassians, according to reports provided by residents of Sochi, Shalikh Koblev and Shamsudin Neguch (Caucasreview.com, July 28).

Modern Krasnodar region was one of the main territories of the Circassians prior to the Russian conquest of the 19th century. After the Russian imperial army dealt the final blow to the small Circassian forces in 1864, in the vicinity of what is today the city of Sochi, the Russian state quickly followed up by expelling the remaining Circassian population to the Ottoman Empire and resettling ethnic Russians and Cossacks in their territory. The Russian state’s grand plan at this time was to turn the Black Sea into an internal sea of the Russian Empire. The Circassians stood in the way of Tsarist plans and suffered almost total expulsion from their homeland. Ethnic Circassians comprise only about half a percent of modern Krasnodar region’s five million people.

Unlike the northeastern Caucasus, the northwestern Caucasus has been quiet from a security point of view. This means the harassment of the Circassian children in Krasnodar region is not about Russian security concerns, but rather a deliberate government policy of pressure and intimidation against a small ethnic minority.

The former principal of the school in Bolshoi Kichmai and deputy head of a local Circassian organization, Aslan Gvashev, told the Kavkazskaya Politika website that the strange behavior of the police looks like an attempt to intimidate the population. “One month prior to the questioning of schoolchildren, the police summoned the organizers of the events marking the Circassian Day of Remembrance and Sorrow and had talks with them,” he said. “I was asked, for example, why I spoke in my mother tongue and whether I fueled interethnic strife.” Gvashev predicted that the authorities would not succeed in frightening the Circassians and that such actions would only irritate and annoy them (Kavkazskaya Politika, July 30).

The actions of the police in Krasnodar region have already irritated Circassian activists in the region and beyond. Aslan Beshto, a Circassian activist in Kabardino-Balkaria who heads the Kabardian Congress organization, told Kavkazsky Uzel that the authorities were trying to artificially create extremism in an area where it was absent in order to justify government funding for fighting extremism. According to Beshto, the trend is not new and the authorities had quietly held talks with Circassian leaders, trying to convince them to drop the yearly ceremony of remembrance for the victims of the Circassian-Russian war. “They erect monuments in the cities of Kavminvody region to commemorate the butchers of Circassians and at the same time they tell us to forget our history,” Beshto said in the interview. The Circassian leader in Karachaevo-Cherkessia, Muhamed Cherkesov, told Kavkazsky Uzel that the authorities should refrain from forcing the Circassians to drop the commemoration of their tragedy, saying it was “unethical and antihuman to force Circassians to forget their tragic dates.” According to Cherkesov, the Circassians did not hold a grudge against the Russian government, even though the government failed to mention them as the indigenous population of the Sochi area during the opening ceremony of the Winter Olympics in 2014. “Russia is not mono-ethnic, but a multinational state,” Cherkesov said. “It is not like France, England or Germany. Russia gathered lands with the people living there, and so Russia should pursue a policy of conservation of these people, and not their destruction” (Kavkazsky Uzel, July 31).

The policy of forcibly “gathering lands with people” is called military conquest, but in today’s official Russian parlance, the term “military conquest” is often replaced by the impersonal “inclusion of land into Russia”; and other euphemisms are used to twist the history of the conquered regions. Even modest attempts by Circassians to reclaim their own history produce a disproportionally harsh response by the Russian government, which is not conducive to a stable resolution of existing differences.