Since their arrival in Amman in the late-19th century, Circassians have been of enormous importance to the development of Jordanian ­society. Prince Ali speaks the language fluently, as he does Arabic and English; he described his odyssey as “immensely spiritual and emotional”. 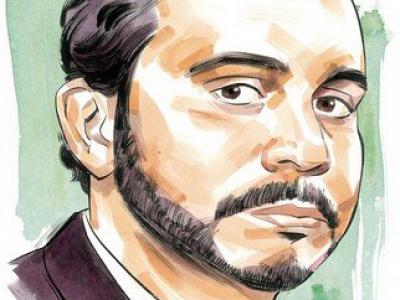 In any fair-minded debate on who should occupy world football’s highest office, Prince Ali bin Al Hussein’s credentials would be seen, at face value, as compelling.

The third son of the late King Hussein of Jordan has announced that he will challenge Sepp Blatter for the presidency of Fifa (the International Federation of Association Football). He’s a man steeped in what is known, with variable accuracy, as the beautiful game.

He presides over his country’s football association and has done so since he was 24, roughly the same age as the heir to the British throne, Prince William, was when he assumed the equivalent position with English football’s governing body, the Football Association, in 2006.

Prince Ali is already Fifa’s vice president for Asia and president of the West Asian Football Federation (WAFF), to which the UAE and the Middle East’s other football-playing countries belong.

Beyond that, he’s a man of the modern world, married to a former CNN journalist, and a man of action. He showed his prowess at wrestling during school years in the United States, underwent military training at the United Kingdom’s elite Sandhurst academy and served Jordan’s armed forces before creating a national centre for security and crisis management. When still a young man, he undertook an ambitious journey on horseback, from Jordan to Syria and Turkey, to raise awareness of the Circassian ­diaspora.

His route was a reversal of that taken when Circassians fled northern and western parts of the Caucasus during and after decades of bitter conflict with the Russian empire. His interest was unsurprising: since their arrival in Amman in the late-19th century, Circassians have been of enormous importance to the development of Jordanian ­society. Prince Ali speaks the language fluently, as he does Arabic and English; he described his odyssey as “immensely spiritual and emotional”.

Perhaps most crucially of all in the contest for Fifa ascendancy, as one British football writer wryly observed following the announcement of the 39-year-old prince’s Fifa candidacy, is that he’s not Sepp Blatter.

To present Blatter, the 78-year-old Swiss head of Fifa, as a controversial figure, or even as a man with implacable and far-flung enemies in a sport with more than its fair share of dispute and polemic, would be a gross ­understatement.

In more than 16 years of office, underpinned by four successful elections to the presidency, he has appeared to veer from one crisis to another, revealing himself to be prone to gaffes when speaking publicly. But he has also demonstrated a supreme grasp of Fifa’s inner workings, to ensure survival.

The world body has stood accused of financial corruption on a grand scale during his years in charge. Blatter was cleared of wrongdoing by both the Swiss authorities and Fifa’s own ethics committee, but a Council of Europe report in 2012 found it “difficult to imagine” he would have been unaware of large sums paid to unidentified officials in connection with lucrative contracts for World Cup television rights.

But it doesn’t stop there. Blatter has been pilloried for a string of imprudent comments and gestures. Even before becoming president of Fifa, but already its general secretary, he talked of the future of football being feminine and recommended “tighter shorts and low-cut shirts”.

Blatter held out for many years against video technology to eliminate game-changing refereeing errors, such as decisions on whether the ball had crossed the goalline or not. When the draw was made for the 2014 World Cup in Brazil, he angered many by clumsily interrupting a minute’s silence for the former South African president and anti-apartheid campaigner Nelson Mandela after just 11 ­seconds.

Prince Ali is in no doubt that ­Fifa’s reputation is, in many eyes, tarnished. He makes the need for change, and especially a resolute effort to move forward from the stain of suspected serial mismanagement, a central plank of his manifesto.

Announcing his intention to challenge Blatter – who has previously declared he will stand for a fifth term, but has yet to ­submit the required paperwork – he said: “I am seeking the presidency of Fifa because I believe it is time to shift the focus away from administrative controversy and back to sport.”

The prince described his decision to stand as a far-from-easy one that had followed careful consideration and discussions “with respected Fifa colleagues” over several months.

“The message I heard over and over was that it is time for a change,” he said. “The world’s game deserves a world-class governing body – an international federation that is a service organisation and a model of ethics, transparency and good ­governance.”

As a vice president, he has shown himself willing to navigate troubled waters, arguing successfully for the withdrawal of a ban on headscarves for female players and positioning himself on the side of those urging publication of the report by Michael J Garcia, an American lawyer, on alleged improprieties in the bidding by Russia and Qatar for the right to stage, respectively, the 2018 and 2022 World Cups.

It’s a measure of widespread distrust in Fifa’s commitment to hoisting itself above suspicion that Garcia felt obliged to resign as its ethics investigator after the body issued only a 42-page summary of the report, which he claimed misrepresented his findings.

Perhaps few would question the wisdom and propriety of the thrust of the prince’s overall mission. The implication of promising top-quality governance, with high importance attached to ethics and transparency, is that such qualities do not apply to the current administration.

But there’s no certainty that Blatter, assuming he does not choose to step down, would not once again use his wiles, and the might of his support system among voting members, to triumph once again.

Prince Ali was born in the Jordanian capital Amman on December 23, 1975 – King Hussein’s second child by his third wife, Queen Alia, who died in a helicopter crash in Jordan when he was only 13 months old. His primary education took place in Amman, after which he studied in the UK and at the Salisbury School in Connecticut, US. After his Sandhurst training, he was commissioned as an officer, serving as a pathfinder in the Jordanian special forces and gaining his parachute wings. As commander of special security for his half-brother, King Abdullah II, who succeeded their father as sovereign, he attained the rank of major-general.

In his work at Fifa, he has chaired the fair play and social responsibility committee and built on his efforts to promote unity and develop football in the Middle East. Prince Ali has been central to key regional initiatives, significantly his founding of WAFF in 2001. In 2012, he launched the Asian football development project to develop football across the continent, focusing on youth, ­women, social responsibility and the “protection and evolution” of the game.

In his campaign to succeed Blatter, the prince promises positive messages and ideas for the strengthening and improvement of Fifa.

The Jordan Football Association website quotes his own words to illustrate a keen sense of priority: “The headlines should be about football, not about Fifa. Fifa exists to serve a sport which unites billions of people from all over the world, people of differing and divergent political, religious and social affiliations, who come together in their enjoyment of ‘the world’s game’.” It also lists overseas recognition, honours that include a British knighthood, the French Legion d’Honneur and the Order of the Rising Sun of Japan.

Against this impressive record, Blatter still has formidable weapons at his disposal. Unpopular he may be in much of Europe, but elsewhere he’s highly regarded and commands considerable loyalty from football officials.

Each member country has a vote and many delegates, particularly those from Africa, South America and the Caribbean, are unlikely to respond favourably to lectures from the western establishment. But European football associations, itching for the change Prince Ali offers, could well turn to him rather than their own contender, Jérôme Champagne, a former Fifa executive and French diplomat, as the best hope.

It would represent a giant step for the Arab world to see a ­majority of 209 international Fifa members vote in a Jordanian prince to the throne of world football – even if much of the international applause reflected general relief that the Blatter reign was finally over.