New Ukraine is preparing to recognize the Circassian Genocide

The bill was officially introduced to the Verkhovna Rada (Parliament) of Ukraine. 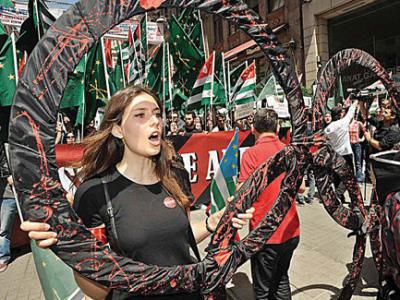 Yesterday , the bill on recognition of the Circassian Genocide during the Caucasian War in the XVIII-XIX centuries was officially submitted for consideration by the Ukrainian Parliament. The initiative belongs to the people's deputy of the Verkhovna Rada of Ukraine and leader of the Radical Party, Oleg Lyashko. Mr. Lyashko's treatment "Support the brothers Circassians" appeared one day before this in which he announced his intention "to register in the parliament a draft resolution on the recognition of the Circassian genocide, carried out by the Russian tsars and their troops in the XVIII and XIX centuries" and he did that.

During the recent presidential elections in Ukraine Oleg Lyashko was third, behind the current president of the country Poroshenko, winning in the first round, and Yulia Tymoshenko who was considered to be his main rival in the elections. He is one of the most active and prominent politicians associated with the currently ongoing antiterrorist operation in the Ukrainian Donbass.

Circassian genocide "crowned" Caucasus war of XVIII-XIX centuries in the 1860s. It was the largest of the great wars of the Russian Empire of that period. Cherkessia disappearance from the world map, the expulsion of the vast majority of survivors from the country after a long, bloody and bitter war of Circassians, combined with new monstrous victims, lied away memory of defenders of their land and even their complete oblivion in the years when the entire history of the Caucasian War in the "right wing" was a "taboo" - these are just some of the consequences of the tragedy. To this day Russia continues to actively prevent the repatriation of Circassians in the Western and Central Caucasus (in historical Circassia) and does not recognize its responsibility for the current situation that determines the future of the Circassian people, the Russian Caucasus and Russia as a whole.

The beginning of the process of recognition of the Circassian genocide was started with Union Scientific and Practical Conference "National liberation struggle of the peoples of the North Caucasus and problems of muhajirstvo", organized by the Institute of History of the USSR, Academy of Sciences of the USSR, North Caucasus Scientific Center of Higher Education, Kabardino-Balkar Scientific-Research Institute of History, Philology and Economics and Kabardino-Balkar State University, held in Nalchik in 1990. In its "Conclusions and Recommendations" for the first time in the USSR the tragedy of Circassian people in the time of the conquest of the Caucasus by Russia was given a clear assessment: "The Russian Tsarist policy in this region has been aggressive, colonialist, conjugate to the conquest, genocide and expulsion of most of the Adyghe people and a part of the other nations outside the country."

The first state to officially recognize the Circassian genocide has become a Russian republic - Kabardino-Balkaria: a corresponding resolution of the Supreme Council of KBSSR appeared on February 7, 1992. The first sovereign UN member state to do the same thing and who has led the question to a qualitatively new level became Georgia in 2011. In addition to that, the Circassian genocide was recognized in 1996 by another Russian republic - Adygea. In 1997, it also was recognized by the UNPO (Unrepresented Nations and Peoples Organization).

Russian Federation for over 20 years repeatedly skimped appeals appeals of the Circassian community, the International Circassian Association (ICA) and the UNPO, as well as public authorities of Adygea and Kabardino-Balkaria, which contained proposals: to recognize the Circassian genocide, recognize the Circassian people an exiled nation and improve the Russian legislation with regard of repatriation issues. Moreover, the authorities had launched a large-scale propaganda campaign to glorify Russian "conquistadors" and "neutralize" Circassian requirements. It concurred with the rule of Vladimir Putin (including the presidency of Dmitry Medvedev).