This is far from the first time that some Russians have been angered by efforts of peoples in the North Caucasus and elsewhere to recall and memorialize their ancestors who fought against invading Russian forces. 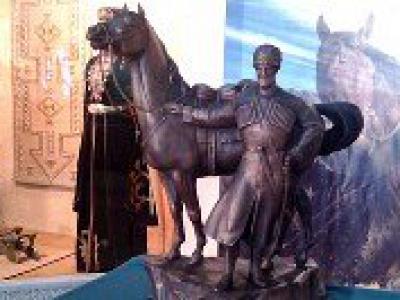 In the aul (village) of Afipsip in Adygea, Circassians are preparing to erect a statue of Kizbechu Sheretluko, a Circassian who fought the Russian advance into the North Caucasus in the 1830s. But they plan to place the statue next to a memorial to Soviet soldiers in World War II and to use this occasion to underline the unity of all Circassians, despite Moscow’s continuing efforts to divide them. This plan is infuriating Russian nationalists.

On July 9, a bronze miniature of the future statue was put on display at the National Museum of the Republic of Adygea. Gazy Chemso, the former culture minister of that republic, said that “in our far from simple history, there are many heroes.” Sheretluko is one of them, and the statue to be erected in Afipsip will serve as an occasion for remembering “all those who fought for the independence and freedom of the Circassian people” (yuga.ru, July 9). At least twice, in 1834 and in 1837, Sheretluko led Circassian units that defeated Russian forces far larger than themselves, killing and wounding many Russian soldiers and officers while suffering relatively small losses. According to Chemso, Sheretluko is “a model of the fearless warrior and talented military leader and a mountaineer who loved his motherland.”

Many people have been involved in the project. The statue itself was modeled on a picture from James Bell’s classic 1840 study, “A Journal of a Residence in Circassia.” It was cast in bronze by sculptors Vladimir Zhdanov and Migrant Arutyunyan. This effort has been supported by the Circassian Heritage Foundation, which is headed by Chemso. Abdullah Bersirov, an architect, and Adam Khidzetl, the head of a horse-riding school, have also been involved.

According to Chemso and other speakers at the session last week (July 9), Afipsip was chosen as the site for the memorial because that was the place most closely associated with Sheretluko’s life and because it has given rise to many legends. And placing the statue to him next to the one honoring the aul residents who fought in World War II was also a carefully considered and “deeply symbolic” step: “The motherland reveres all its heroes,” the Circassian speakers said (yuga.ru, July 9).

Organizers are now collecting funds for the full-sized statue that will go up in the aul eventually. It will be made of bronze and measure 3.3 meters by 4 meters. The mini-statue exhibited at the museum last week is one of 12 that were cast to mark the 150th anniversary of the end of the Caucasus war earlier this year. The number “12” is also deeply symbolic, Chemso said: it is the number of stars on the Adygean flag and thus shows that Sheretluko is not just a hero of one aul or one republic but of all Circassians.

Perhaps not surprisingly, not all Russians are as pleased about this statue of a Circassian hero and the statements and plans of Circassian leaders in Adygea. According to the Nakanune.ru news service, a number of Russian bloggers believe that what the Circassians are trying to do is to “present Russians as occupiers on their own land and gradually deprive them of their right to consider Russia as their own land” (nakanune.ru, July 11).

This is far from the first time that some Russians have been angered by efforts of peoples in the North Caucasus and elsewhere to recall and memorialize their ancestors who fought against invading Russian forces.

The most prominent of such cases involved Chechnya. Last year, Ramzan Kadyrov, the head of the republic, took part in the opening of a memorial in the village of Khangish-Yurt to Chechen women who killed Russian soldiers during the Caucasian wars of the 19th century (see EDM, September 26, 2013). Other, if less intensively covered squabbles have concerned the erection of monuments and the writing of new histories in many non-Russian parts of the Russian Federation and even in some predominantly ethnic-Russian ones, where the forefathers of the current residents resisted Moscow’s advance.

The Russian authorities will do what they can to block the erection of the memorial to Sheretluko. If the past few months are any guide, they will probably bring trumped-up charges of one kind or another against the organizers, they will organize demonstrations in Adygea and elsewhere against such a statue, and they will suggest that if the Circassians go ahead with erecting the statue, they will lose any chance to obtain Moscow’s agreement on the immigration of Circassians from war-torn Syria (see EDM, September 16, 2013).

Moreover, Moscow may have one more trump card in this case: Because of the influx of refugees from eastern Ukraine (see EDM, July 7), the Russian authorities have just declared a state of emergency in Adygea, a step that will allow them to put most projects on hold (ITAR-TASS, July 14).