Moscow plans to use the Ukrainian crisis for social engineering purposes in the North Caucasus, increasing the level of ethnic Russians in a region that is known for its strong separatist sentiment and strong sense of national identity. 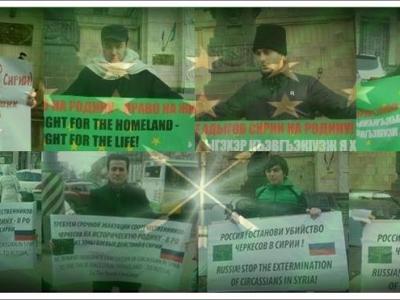 The head of the Circassian organization Adyge Khase in Karachaevo-Cherkessia accused Russian authorities of having a policy of double standards in regard to assisting compatriots abroad.

According to Muhamed Cherkesov, only about 30 Circassian refugees from Syria have been allowed to settle in Karachaevo-Cherkessia, while over the past several months, an estimated 350 refugees from Ukraine were allowed to come to the republic. Cherkesov said the authorities did not provide any assistance for the Circassian refugees, and that no Syrian refugee has received official refugee status because the authorities have denied political refugee status to those fleeing the civil war there. “I am glad that the authorities showed hospitality toward the Ukrainians although they did it on orders from above,” Cherkesov said. “But I do not believe in this hospitality much, because hospitality cannot be selective. If the authorities had hospitality, it would have been shown in regard to the Syrian refugees too. This is showy hospitality. If they did not help the Syrians, at least let them help the Ukrainians, whatever their true motive is.” The activist stated that the Circassians were not surprised by the Russian government’s dismissive attitude toward their interests. “In Russia everything has always been decided by one person. The heart of the current head of the state is dark in regard to the Circassians. So we do not expect any assistance anymore, even though I do not know what Circassians did to Russia to cause such an attitude toward us” (politika09.com, July 17).

Before the Russian conquest of the 19th century, Circassians occupied large areas of the Black Sea coast and the western and central parts of the North Caucasus. The Russian army systematically eliminated the Circassian population in their homeland, killing civilians, destroying their subsistence resources and deporting the remaining population to the Ottoman Empire. As a result, the majority of ethnic Circassians today live abroad—in Turkey, Jordan, Syria, Germany, the United States and other countries. The Olympics in Sochi earlier this year gave a boost to Circassian attempts to air their grievances and revive their national consciousness because the Sochi area was the home to a large Circassian community prior to the Russian conquest. The refugee crisis in Syria added a sense of urgency to Circassian demands that the Circassians in the North Caucasus be allowed to communicate freely with their compatriots abroad and that the Circassian “genocide” of the 19th century be recognized. However, Moscow’s response to these demands has been characterized by silence, denial and repression.

A Circassian website asserted that just one of the republics with a titular Circassian population, Adygea, had alone received 1,400 refugees from Ukraine in recent days. The government is providing the Ukrainian refugees with all their basic needs. At the same time, the Russian government has allowed only an estimated 1,500 Circassian refugees from Syria to come to the entire North Caucasus, even though an estimated 15,000 Circassians have fled Syria to other countries, such as Jordan and Turkey. Despite the fact that Russian legislation officially proclaims that all qualifying compatriots abroad will be treated equally in terms of government support for their repatriation, in practice Moscow clearly differentiates between “equal” and “less equal” compatriots abroad (circassiatimesenglish.blogspot.ru, July 14). Ethnic Russians living outside the country receive generous support from Moscow, while ethnic Circassians are excluded.

With the Russian state giving clear preference to ethnic Russians and the North Caucasian authorities following suit, private individuals in the region are stepping in to assist the Circassian refugees. In July, Khazret Sovmen, an ethnic Circassian millionaire who was president of Adygea, met Circassian refugees from Syria in Adygea’s Takhtamutai district and offered them the equivalent of $3,000 per person as a first step to help resettle them in the region. Sovmen emphasized that in these difficult times the Circassian people are undergoing a test to prove they are “true Circassians” and promised to support developmental projects in the district. The Circassian financier obliquely criticized the authorities in Adygea, citing unnamed individuals who “do not notice the troubles and the suffering of people, showing indifference and spiritual callousness” (circassiatimesrussian.blogspot.co.il, July 17).

Meanwhile, people in the North Caucasus have started asking why refugees from Ukraine are being resettled in the overpopulated North Caucasus instead of regions deeper inside Russia that are experiencing declining levels of population. According to Muhamed Cherkesov, a Circassian activist in Karachaevo-Cherkessia, when the legislation on Russian compatriots and their resettlement in Russia was discussed, Moscow excluded Kabardino-Balkaria, Karachaevo-Cherkessia and Adygea from the list of regions that could receive settlers from abroad, since these regions were considered “densely populated.” Now, however, despite the Russian government’s own previous declaration, Ukrainian refugees are being resettled in these republics (politika09.com, July 17).

This observation once again offers circumstantial evidence that Moscow plans to use the Ukrainian crisis for social engineering purposes in the North Caucasus (see EDM, July 7), increasing the level of ethnic Russians in a region that is known for its strong separatist sentiment and strong sense of national identity. The difference in the treatment of ethnic-Russian refugees from Ukraine and ethnic-Circassian refugees from Syria, however, obviously serves to make the Circassians more antagonistic to Moscow, overshadowing Moscow’s purpose of increasing the proportion of ethnic Russians in the North Caucasus.