The Circassian Question: Russian Colonial History in the Caucasus and a Case of “Long-distance Nationalism”

The Sochi Winter Olympics is just one of the reasons behind renewed Circassian activism in Russia and beyond. As Uwe Hallbach sees it, the resurgence is also the latest manifestation of a ‘long-distance nationalism’ that may, in time, challenge the Putin administration’s grip on power. 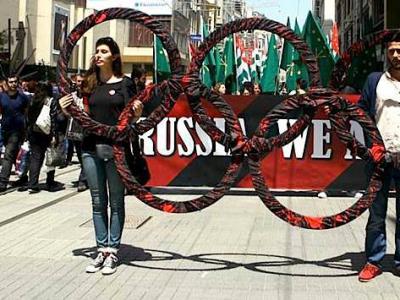 On 21 May 2014 Circassians all over the world marked the 150th anniversary of the expulsion of their ancestors from their North Caucasian homeland. The links between this unresolved legacy of Russian colonial history and President Putin’s prestigious Winter Olympics in Sochi have reinvigorated Circassian activism. While different objectives and methods coexist within the movement, the demand for acknowledgement of the wrongs inflicted on their forebears is shared by both the remaining Circassian population in the North Caucasus and Russia (about 700,000) and the worldwide diaspora (several million). What challenges does this present for Russia?

Sochi 2014 confronted the world with the hitherto largely neglected “Circassian question”. Although the Olympic city and its North Caucasian neighbourhood had been the Circassians’ historical homeland until 1864, the host nation neglected to include them in the planning of the Games. This contrasts, for example, with the Canadian approach to its indigenous population for the previous Games in Vancouver. When President Vladimir Putin presented Sochi’s bid in 2007, his speech to the IOC mentioned numerous nations and cultures that had shaped the Caucasian Black Sea coast since classical antiquity, but not the Circassians. The first time he spoke of the original inhabitants of the area was shortly before the Games opened, to complain that forces hostile to Russia were exploiting the “Circassian card”. By contrast, the parliaments of the republics of Kabardino-Balkaria (1992) and Adygea (1996) used the term “genocide” in resolutions on historic violence against the Circassians. What they were referring to was the deliberate expulsion of what was then the largest North Caucasian nationality, following its 1864 defeat in the Russian-Circassian War.

Emergence of a National Movement

The choice of Sochi reignited a Circassian movement that had emerged in the early 1990s but subsequently lost momentum. The most significant development in the early post-Soviet period occurred between August 1992 and September 1993, when the conflict between Georgia and Abkhazia erupted into open warfare. This brought forth a solidarity movement, the Confederation of the Peoples of the Caucasus, which mobilised large parts of the North Caucasus, especially the residual Circassian popula-tion, to fight against Georgian forces in Abkhazia, and played no small role in their defeat. Hundreds of Circassian volunteers joined the fighting. The remaining Circassian population in the North Caucasus lives largely in the republics of Adygea (capital: Maykop), Karachay-Cherkessia (Cherkessk) and Kabardino-Balkaria (Nalchik).

Kabardino-Balkaria has the highest proportion of Circassians (Kabardians) in its population, with 55 percent. During the post-Soviet phase Circassians in all three republics competed with representatives of other nationalities for local political and economic resources, for example with Turkic Karachays and Balkars and with ethnic Russians. The 1999 presidential elections in Karachay-Cherkessia represented an ethno-political watershed, followed by weeks of demonstrations against the disputed victory of the Karachay candidate. Yet another spur for a Circassian national movement came in 2005, when the Kremlin announced plans to revoke Adygea’s autonomy and merge it into Kras-nodar Krai. The central demands of the activists are for Circassians in the North Caucasus diaspora to be permitted to return, and for the historical Circassian settlement areas to be amalgamated into a single autonomous territorial unit.

The mobilisation that began in 2007 reached well beyond the North Caucasus, into the worldwide diaspora in which 90 percent of Circassians live today. The largest community is in Turkey, as the successor to the Ottoman Empire to which most of the Circassian deportees were sent. In Turkish, “Çerkes” is often used to describe all groups with Caucasian roots in modern Turkey, amounting to a figure of several million. As far as Circassians in the stricter sense are concerned, the Ottoman authorities resettled the deportees of 1864 among Armenians and other minorities in western and central Anatolia and in Ottoman possessions in the Balkans and the Middle East. Although figures for groups of Caucasian origin in modern Turkey are based on estimates, it is known that there are more people of North Caucasian, especially Circassian and Abkhazian, origin in today’s Turkey than in their original home regions.

Although several hundred Circassian villages can still be found in central and western Anatolia, as a whole homogenous diaspora settlements of single Caucasian nationalities in generally dissolved in the course of urbanisation. In the post-Soviet period the large Caucasian diaspora came to play a role in Ankara’s relations with Russia and the South Caucasus. When the Abkhazia conflict flared up, organisations in Turkey called for support and solidarity for the struggle of their Abkhaz “brothers” and the volunteer forces from the North Caucasus. Later Chechnya became a point of reference for Caucasian solidarity groups. The Chechen wars fell in a period of warming relations between Russia and Turkey that saw the two Black Sea powers – which fought more than a dozen wars in the eighteenth and nineteenth centuries – growing closer in the fields of business, energy and tourism. This placed narrow limits on Ankara’s solidarity with diaspora groups agitating against Russia. The same also applies to relations with Georgia, which also blossomed in the spheres of commerce and tourism.

Circassian diaspora groups are also of some relevance in Middle Eastern states and societies. Up to 100,000 North Caucasians are estimated to live in Jordan, largely Circassians, but also Chechens and others. Here the Circassian minority is especially strongly rooted in government, business and the military and close to the royal family. The Circassian community in Syria, which also numbers about 100,000, is currently endangered by the civil war. Circassians in Egypt occupy a special historical position. They arrived there not through deportation from Russia in the nineteenth century, but as Mamluks, a military caste that played a leading role in Egypt from the fourteenth century. The Circassian community in Israel comprises only about 3,500 members, but stands out for its homogenous settlements and preservation of the native tongue. The younger generation of the Western diaspora (for example in the United States and Germany), on the other hand, generally no longer speaks Circassian. Islam has not to date been central to national identity, though young Circassians in the North Caucasus, like their peers in other Muslim nationalities there, have come under the influence of radical Islamist networks. In Kabardino-Balkaria, for example, the group Yarmouk has emerged as a jihadist formation. It is the memory of the 1864 deportations that is central to Circassian identity.

Return to the Homeland?

In the early 1990s Russian Caucasian republics with residual Circassian popula-tions established ties to the diaspora and supported returnee programmes. But aside from a few thousand returnees the contact remained largely restricted to tourism by diaspora Circassians in the historic homeland. Nor was a broader returnee movement to be expected, given that Circassian immigrants in many places have been relatively well integrated for several generations. The current exception is Syria, where the escalating civil war represents an acute threat to ethnic and confessional minorities. Circassian organisations world-wide are now calling upon Russia, which in 1999 gave refuge to Circassian families from the war zone in Kosovo, to accept Syrian Circassian “returnees”.

While several hundred have already arrived in Maykop and Nalchik, Moscow is generally wary of returnee movements of non-Russian nationalities in the North Caucasus. The Russian leadership has no interest in immigration increasing the Caucasian population in the region, after most of the ethnic Russians left during the course of the past twenty years. The Ukraine crisis has heightened contradictions in Russian immigration policy. After annexing the Crimea, the Kremlin offered all citizens of the former Soviet Union Russian citizenship as long as they were able to speak Russian. The language restriction naturally excludes diaspora Circassians. At the same time, Russian-speakers from eastern Ukraine are currently being resettled in the North Caucasus, despite concerns about the security situation there.

The first International Circassian Congress was held in Nalchik in May 1991. It set up the International Circassian Association (ICA), whose elected members represent Circassian communities in the three north-west Caucasian republics and the diaspora. They comprise numerous organisations from Turkey, Russia and other countries, including Circassian councils (Adyghe khase) from the three North Caucasian republics, from Krasnodar Krai, from Moscow and from Abkhazia, charities from Turkey, the Middle East, California and New Jersey, and a Tscherkessische Kulturverein (Circassian Cultural Association) from Germany.

The ICA sees its main task as coordinat-ing cultural relations between Circassian communities across the world. It has, however, not pursued that goal with great vigour. Its offices are staffed largely with members of the bureaucratic elites of the three Caucasian republics, who were concerned to avoid confrontation with Moscow and practically failed to respond to Russian repression against activists who raised the “Circassian question” in connection with Sochi 2014. Such activists increasingly organise in small autonomous groups outside the ICA, which also missed the transition to the internet age and for a long time did not even have its own website.

Shifting Relations with Abkhazia and Georgia

In 1992 Circassians joined other North Caucasian nationalities to fight with the Abkhaz, their ethnic kin in the South Caucasus, against Georgia. But allegiances shifted after the Russo-Georgian Five-Day War of 2008. Under President Mikheil Saakashvili, Georgia pursued an anti-Russian North Caucasus policy, one of whose central elements was to stir up the Circassian question in connection with Sochi 2014. In May 2011 the Georgian parliament passed a resolution recognising the “genocide of the Russian Empire against the Circassian people”. Tbilisi was thus able to drive a wedge between Abkhazians and Circassians, who had both once suffered so-called ethnic cleansing under Russian colonialism. Its great dependency on Russia in its conflict with Georgia meant that Abkhazia was, to the frustration of its former ally, unable to join these recognition moves.

The new Georgian government in 2012 adopted a more pragmatic line towards Russia and thus also North Caucasus and refrained from boycotting the Olympic Games in Sochi. But its underlying stance on the Circassian question remained unchanged. In the aftermath of the 2014 Crimea crisis, some political forces in Ukraine are now calling for Russian colonial policy towards the Circassians to be officially condemned as “genocide”.

Today there are few veterans from the time of the Abkhazia war left among the ranks of Circassian activists. A new generation aged between 18 and 28 communicates via the internet and is networked with Circassian communities across the world. They provide an example of the phenomenon for which the American political scientist Benedict Anderson coined the term “long-distance nationalism”, which has already been identified in the Armenian and other diaspora communities. Although the Circassian case has not produced a coherent, militant or overtly returnee-driven national movement liable to burden the problem-laden North Caucasus with yet more potentially violent conflict, the revival of interest in their ethnic roots among young people of Circassian origin does represent a challenge for Russia. Moscow finds itself confronted with an unresolved chapter of its colonial history – during a phase where President Putin is cultivating a patriotism that leaves little space for self-critical historical reflection.

Dr. Uwe Halbach is a Senior Associate in SWP’s Eastern Europe and Eurasia Division.
This paper is a product of the EC funded FP7 project “Intra- and Inter-Societal Sources of Instability in the Caucasus and
EU Opportunities to Respond”. The views expressed in this paper do not necessarily reflect the views of the European Commission.