Circassian political activism remained alive after the Sochi Olympics, and the Russian-Ukrainian crisis gives the Circassians hope that they will receive more support from neighboring countries. 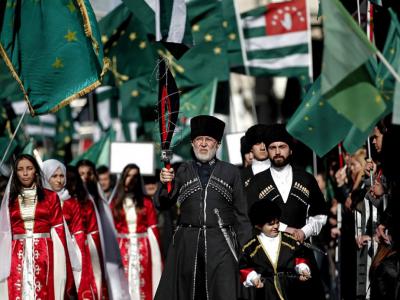 The Sochi Olympics and issues related to the refugees from Syria have dominated the political discourse in the Northwest Caucasus for most of this year. The surprising Russian-Ukrainian crisis has also had reverberations in this part of the Caucasus. Hostility between Kyiv and Moscow prompted the Circassians to seek the Ukrainian government’s recognition of the actions of the Russian Empire against the Circassians as “genocide.” As always, some pro-Moscow Circassians rejected help from Ukraine, but the majority of Circassians supported the appeal to the Ukrainian leadership signed by Circassian activists from the North Caucasus and the diaspora (politika09.com, August 7).

On February 7, the first day of the Winter Olympics in Sochi, a group of unaffiliated Circassians staged a small public protest in Nalchik, Kabardino-Balkaria, but the protests were quickly suppressed (natpressru.info, February 7). The security services conducted surveillance of well-known Circassian activists, but this proved insufficient to observe the emergent self-established groups, which quickly organized via social media to stage surprise public protests (kavpolit.com, February 7).

A police general with expertise in combatting organized crime and insurgency, Yuri Kokov, replaced the previous governor of Kabardino-Balkaria, Arsen Kanokov, in December 2013. Kokov was formally confirmed as the head of Kabardino-Balkaria by the parliament of Kabardino-Balkaria in October 2014. Kokov’s leadership style is far less public than his predecessor’s. The change in the republican government, as in the other violent republics of the North Caucasus, resulted in a decrease in insurgent activities. The pacifying effect of a fresh governor indicates that the conflict in the North Caucasus is political, and reintroducing direct elections in the region would make insurgent leaders far less appealing to the disenfranchised parts of the population. Insurgency-related violence did not dissipate in Kabardino-Balkaria completely, however, nor did the claims of abuse of power by the police disappear.

On August 1, a well-known Kabardino-Balkarian journalist, Timur Kuashev, was found dead in the suburbs of Nalchik. The 26-year-old journalist was known for his moderate political views and a certain degree of popularity with Muslim youth. At the same time, Kuashev was close to Maksim Shevchenko, who is an earnestly pro-Kremlin journalist (kavpolit.com, September 8). The killing of Kuashev may have come as result of different factions of the Russian government competing for influence over policy issues in the region. In another possible case of young popular Muslims being eliminated, the deputy mufti of North Ossetia and the imam of Vladivkaz’s mosque, 32-year-old Rasul Gamzatov, was killed on August 16 (Kavkazsky Uzel, August 18).

Despite the direct link between popular political representation and political stability in the North Caucasus, Moscow appears to be increasingly reverting to direct rule in the region. Under the pressure from Moscow, all the republics in the northwestern Caucasus one by one have adopted changes in their legislation to replace the direct election of governors with appointment by the Russian president. True to the traditions of imperial Russia and the Soviet Union, the contemporary Russian government has indulged in informational warfare, putting forward several mutually exclusive statements about the North Caucasians. The message of the Russian propaganda was that North Caucasians “are not ready for elections.” At the same time, Moscow pretended the North Caucasian republics themselves chose to reject direct elections for governors. In reality, Moscow’s insistence on appointing governors in the North Caucasus and allowing ethnic Russian regions to choose their governors indicated that Moscow could not reliably control the electoral processes in the North Caucasus. This essentially means that the North Caucasian republics are better equipped for a contested political process than many ethnic-Russian regions, where opposition has been all but eliminated and elections yield the results desired by the Kremlin.

Some Circassian activists have started grumbling about the Russian government’s biased treatment of Circassians from Syria, and the contrast between their situation and that of the Russians from Ukraine became glaring. Resettling Ukrainian refugees in North Caucasian republics known for their endemic unemployment suggests the Russian government may be carrying out a social engineering project that involves resettling as many ethnic Russians in the region as possible to try to change the ethnic balance in these territories, which are increasingly becoming the homogenized homelands of North Caucasian ethnic groups.

Circassian political activism remained alive after the Sochi Olympics, and the Russian-Ukrainian crisis gives the Circassians hope that they will receive more support from neighboring countries. Georgian recognition of the Circassian “genocide” in 2011 gave a significant boost to the Circassians’ hopes that Moscow will start taking their demands seriously. The Russian government’s denial of the problem has done little to address Circassians’ concerns, so frictions between the central government and Circassian activists are likely to continue.

Photo (TIME): Members of a Circassian ethnic group shout slogans during a protest against the Olympics in front of the Russian Consulate in Istanbul, Feb. 2, 2014.