Turkey hints on the “common past” of Russia and Germany in regard to the Armenian issue. And in the case of Russia there is a hint on another tragedy of the Caucasus – the massacres of Circassians. 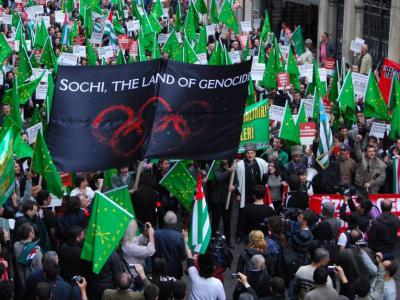 The Turkish authorities have condemned the Russian president Vladimir Putin for referring to the massacres of Armenians in 1915 as genocide. “Taking into account the mass atrocities and exiles in Caucasus, in the Central Asia and Eastern Europe committed by Russia for a century; collective punishment methods such as Holodomor as well as inhumane practices especially against Turkish and Muslim people in Russia’s own history, we consider that Russia is best-suited to know what exactly “genocide” and its legal dimension are,” the statement of the Turkish foreign ministry holds.

Have these statements by the Turkish authorities forced Germany and Russia to “retreat”. At least, Putin avoided the word “genocide” in his speech in Yerevan, and the German parliament put off the discussion of the resolution on the Armenian genocide which was to take place on April 24. Germany and Russia are a sensitive issue, and Turkey’s tough response is not incidental. Historically, these three countries have a lot in common, especially during World War I. Germany was Turkey’s ally, and Russia, one of the Entente Powers, nevertheless, had an ambiguous role in the events of those years.

The point is about the massacres and displacement of Armenians. According to numerous historical sources, Germany directly supported this policy, whereas Russia’s behavior in the Armenian territories was rather strange. The Bolshevist government of Russia supported and helped Turkey’s genocidal policy even in the territories of Soviet Armenia. Turkey avoided utter defeat only with Russia’s help. The Armenian territories were divided between these two countries. Ethnographer Hranush Kharatyan has published innumerable archive documents on the atrocities perpetrated by the joint Turkish and Russian forces in 1921-1923 in Soviet Armenia, killing hundreds of thousands of Armenians. Hundreds of thousands of West Armenians were displaced to inland in Russia where some of them died on the way from hunger and diseases.

These events were the continuation of 1915 which, however, have been silenced for clear reasons. Hence, Turkey hints on the “common past” of Russia and Germany in regard to the Armenian issue. And in the case of Russia there is a hint on another tragedy of the Caucasus – the massacres of Circassians. The Russian invasion caused the death of millions of Circassians; those who survived left their historical homeland. One remembers Sochi Olympics when the Olympic facilities were built on the bones of the Circassians. Then actions of protest took place in different towns of the world, including Sochi.

These two countries can rid of the Turkish blackmail if they acknowledge the historical truth, recognize and condemn it. And most importantly, by addressing the consequences of the genocide. Putin “retreated” in Yerevan. Let’s see if Germany will have that courage.