Russia needs to confront their own history, recognise the murder of Circassians as genocide and compensate them for their exile, 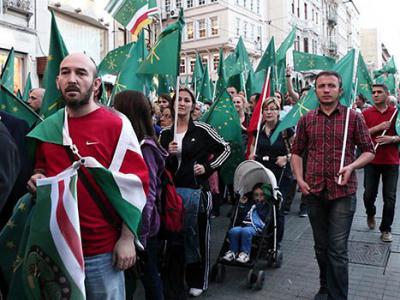 Turkey's Foreign Ministry marked the 151st anniversary of the expulsion of the Circassian people and their “ethnic cleansing” at the hands of the Russian empire in 1864. According to unofficial figures, nearly 1.5 million Circassians were expelled from their lands and between 400,000 to 500,000 of them died in 1864.

The Turkish Foreign Ministry in a statement on May 21 offered condolences to the families of those who died in the 1864 tragedy. "We call on the world to leave a bright and peaceful future for the next generations, within the scope of a just memory," the statement said.

The 1864 war near Sochi resulted in a defeat for Circassians and saw the Russian empire invade all of Caucasia. Large numbers of native inhabitants of the Northwest Caucasus were expelled to the neighbouring Ottoman Empire after the war. The expelled Circassians mainly moved to Anatolia and Rumelia, while some of them also migrated to Syria and Jordan.

Circassian activists have been working on a project for recognition of the 1864 expulsion as the “Circassian genocide.” The project which was proposed in September 2014 to the Ukraine parliament cites to envisage organizing an international conference on the issue in Ukraine and launching a scientific discussion of the topic.

Circassian Association Federation Board member, Halis Din, criticised Russian President Vladimir Putin on April 24 over his visit to Yerevan over the 1915 Armenian exile and accused him of avoiding to confront Russian history. “Russia needs to confront their own history, recognise the murder of Circassians as genocide and compensate them for their exile,” Din said.

The Russian Federation continues to block the way back for banished Circassians, while Circassians want to start legal proceedings to return home. They also want a dual citizenship from Russia and want May 21 to be recognized as the day of the "Circassian genocide and exile."