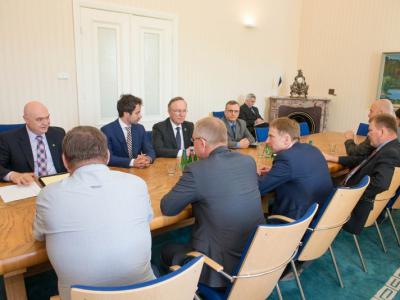 Chairman of the Foreign Affairs Committee of the Riigikogu Hannes Hanso said that the fate of the Circassians is a historical issue that by today has acquired a clearly international character. In Hanso’s opinion, the Circassians support the European values.

Member of the Riigikogu Eerik-Niiles Kross said that Estonians have a certain debt of honour to the Circassians, because the Estonian settlers near the Black Sea, for example, in Krasnaya Polyana, were settled on the Circassian lands. Kross noted that during the 150 years of living in exile, this North-Caucasian nation has preserved both its language and its culture, and added that today the communication of the Circassians with their historic homeland is hindered, several hundreds of thousands of Circassians live as refugees as a result of the Syrian War.

In the opinion of the Member of the Riigikogu Artur Talvik, Estonia should consider the possibility of receiving Circassians with refugee status, which would help reduce our debt of honour.

The present city of Sochi is also a part of Circassia, and the Circassians all over the world organised peaceful demonstrations against the Winter Olympics held there in 2014. Currently they are protesting against holding the World Cup football tournament of 2018 in Sochi, because the games would take place on their historical lands.

In their letter to the President of the Riigikogu, the Circassians ask the Estonian Parliament to recognise the genocide on Circassians committed by the Russian Empire during the Russo-Circassian War in 1763–1864. They have sent a similar appeal to the parliaments several countries. Of the member states of the UN, Georgia has so far recognised the genocide.

The Riigikogu of Estonia