The outside world is considering giving support to the Circassians, which will help the activists improve coordination and generate greater public support. 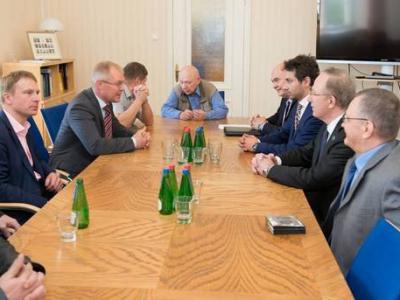 On June 4, the press service of the Riigikogu (Parliament of Estonia) announced that a group of members of the Estonian legislature met Circassian activists Iyad Youghar (United States), Adel Bashqawi (Jordan) and Dr. Nusret Baş (Turkey). The main issue on the meeting’s agenda was the fate of the Circassian nation, which has been scattered across dozens of countries since Russia conquered historical Circassia and expelled the majority of the Circassians from their homeland. According to Hannes Hanso, chairman of the Estonian parliament’s Foreign Affairs Committee, “the fate of the Circassians is a historical issue that by today has acquired a clearly international character.” Member of parliament (MP) Eerik-Niiles Kross said that “Estonians have a certain debt of honor to the Circassians because the Estonian settlers near the Black Sea, for example, in Krasnaya Polyana, were settled on the Circassian lands.” According to yet another MP, Artur Talvik, Estonia should consider receiving Circassian refugees from Syria to “repay” that historical debt. The press release noted that Circassian activists had asked the Estonian parliament to recognize the “genocide” of Circassians by the Russian Empire during the Russo-Circassian war of 1763–1864 (Riigikogu.ee, June 4).

The chairman of the International Circassian Council, Iyad Youghar, told Jamestown that, in his opinion, Estonians see many similarities between their own history and the history of the Circassians. This means that Estonians understand Circassian grievances and aspirations particularly well and empathize with the challenges they face (Author’s interview, June 6).

Circassian activists had appealed to the Estonian parliament earlier—in 2010—and received a warm reception. Back then, members of the Estonian parliament promised to inform their European colleagues about the Circassian issue and raise the issue with Russia. The reaction of Russian officials was predictably hostile. The notorious Russian State Duma deputy Sergei Markov said the Circassian problem did not exist, insisting it was simply an “ideological diversion to blow up the Caucasus” carried out by the “Russophobic” governments of Georgia, Estonia and Poland, as well as certain strategy centers in Washington, which have viewed Russia as an enemy since the end of the Cold War (Natpressru.info, October 15, 2010). Despite all the rhetoric about “Russophobia” and hostile neighboring countries, it is only Russia in recent years that has attacked and annexed the territory of its neighbors, not “Russia’s enemies” encroaching on its territory.

Another Russian scholar, Natalya Babich, expanded on this strategy, asserting that a unified Circassian community does not exist in a political sense. The idea of uniting the Circassians has emerged only in the past ten years in connection to political discussions of the issue of the Circassian genocide. Babich alleged that the average Circassian does not care about the Circassian question, even though she did not provide any survey results or other evidence to support her claim. Naturally, Circassians may not emphasize their grievances in interviews with her, because she is seen as a Russian rather than a scholar. Babich recognized that the government’s support for ethnic-Russian refugees from Ukraine and neglect of the Circassian refugees from Syria amplify the historical trauma of the Circassians and contribute to a “powerful anti-Russian component in the Caucasus” (Kavkazgeoclub.ru, June 5).

On the one hand, Babich is certainly right, in a sense, that there is no political unity among Circassians at the moment. That, in fact, explains why many Circassians speak in favor of creating a single autonomous region in Russia to provide their nation with some political unity. On the other hand, the Russian scholar assumes the current state of affairs will not change, even though she does see that the situation among Circassians has changed over the past ten years, as recognition of the Circassian “genocide” has become the rallying point for increasingly large numbers of Circassians in the North Caucasus and elsewhere in the world, most principally in Turkey. The Estonian parliament’s interest in the Circassian question also indicates that the outside world is considering giving support to the Circassians, which will help the activists improve coordination and generate greater public support.