The Shapsugs, once one of the largest of the Circassian sub-ethnic communities, now number only a few more than 10,000 and live mostly in two districts of the city of Sochi or in the Adygei Republic. 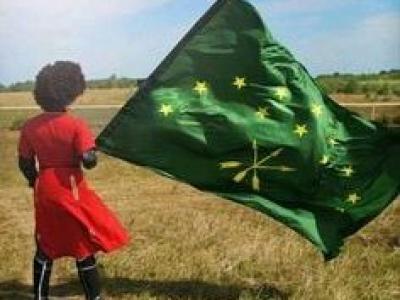 Most analysts concerned with the Circassian issue in the North Caucasus have focused on the three republics where subgroups of that nation are the titular nationalities—Adygea, Karachaevo-Cherkessia and Kabardino-Balkaria—or on the enormous diasporas in Turkey, Jordan and elsewhere. But another player has emerged in the Caucasian struggle with Moscow for recognition of the tragic events of 1864 as “genocide,” the reunification of a common Circassian homeland and, ultimately, independence.

The Shapsugs are a subgroup of the Circassians in the Northwestern Caucasus. With a population centered on Sochi, they were perhaps more radicalized by the Circassian campaign about genocide recognition in the run-up to the Sochi Winter Olympiad last year. They are a community heavily represented in the diaspora and its various political organizations. And precisely because they do not have a republic of their own but are more urban and modernized than many ethnic groups or nationalities that do, they are a group that can act in ways that others in the North Caucasus may be constrained from doing and link these communities together. And perhaps most importantly, the Shapsugs may be able to help connect the 500,000 Circassians of the North Caucasus with the more than five million Circassians living outside of Russia.

In recent months, they have become even more active in Circassian gatherings, both inside the borders of the Russian Federation and abroad. Illustratively, their presence generated spirited discussions at meetings devoted to the restoration of a common Circassian alphabet (Kavkazsky Uzel, June 15). As a result, they have become the object of increasing attention by Russian officials and Russian scholars working for Moscow who are quite concerned that this subgroup of Circassians may represent an even greater challenge to Russia’s position in the region than other, larger ones.

A new article by Aleksandr Skakov, the coordinator of the working group of the Center for the Study of Central Asia and the Caucasus of the Moscow Institute of Oriental Studies, provides important background information on the Shapsugs. But even more importantly, Skakov’s article suggests that Moscow plans to try to separate them from other Circassians by promoting their distinct identity, up to and including by the restoration of a Shapsug political-territorial unit, and to attempt to use them as a bridge to Circassians in the Middle East in the interest of promoting Moscow’s foreign policy goals (Kavkazoved.info, June 2).

Skakov begins by asserting that despite their failure to block the Sochi Olympiad, “foreign forces continue their attempts to give an anti-Russian direction to ‘the Circassian factor’ and in particular to the problem of the Shapsugs, a small Adygei people living in Greater Sochi.” To that end, he says they continue to promote the idea that there was a “Circassian genocide” in 1864. As a result of these efforts, the Moscow scholar says, “the situation on the southern borders of Russia continues to remain unsettled and it is not hard to predict that ‘the Circassian factor’ sooner or later will again be used with anti-Russian goals by this or that external force.”

The Shapsugs, once one of the largest of the Circassian sub-ethnic communities, now number only a few more than 10,000 and live mostly in two districts of the city of Sochi or in the Adygei Republic. While nearly all of the latter consider themselves part of the Circassian nation, he suggests, many of the former still maintain their distinct Shapsug identity; and Moscow should make use of that fact.

The original areal of the Shapsugs was occupied by Russian forces in 1864, and between 165,000 and 300,000 Shapsugs were forced to emigrate to the Ottoman Empire. This action cost many of them their lives but also explains why the Shapsugs are such an important element of the Circassian diaspora and why so many of them view what happened a century and a half ago as a “genocide.” This is all the more so because they were not treated well either by the tsarist authorities, the Soviets or the post-Soviet Russian government.

After the 1917 Bolshevik revolution, the Shapsugs sought to form a union republic within the Union of Soviet Socialist Republics (USSR), but Moscow vetoed the idea. Instead, it created a Shapsug national district. Later that was joined to Russian areas and, as a result, the Shapsugs became a tiny minority within a Russian sea. At the end of Soviet times, the Shapsugs sought to restore their national district, but that effort was caught up in Moscow politics with the Russian Soviet Federative Socialist Republic (RSFSR) supporting it while the USSR government vetoed it. Nevertheless, even after 1991, Moscow did not agree to this territorial change, largely because all of the proposed borders for such a district would have left the Shapsugs constituting “no more than 5 or 6 percent” of its population. That failure has created conditions for the radicalization of Shapsug opinion, Skakov says.

Moreover, he suggests, there is the possibility that religious radicalism will exacerbate such feelings. The Shapsugs are Sunni Muslims, “but the level of their religiosity is quite low” and they retain many pre-Islamic religious beliefs and practices. Nonetheless, some outside forces may seek to turn the Shapsugs in the direction of Islamist ideas and movements. And consequently, “even minimal involvement” by Western forces with the Circassians “does not correspond to the interests of the Russian Federation,” Skakov argues.

At the end of his article, the Russian scholar makes two proposals: On the one hand, he says, Moscow should devote more efforts to preserve and develop a separate Shapsug identity lest they mobilize as Circassians, even considering the possibility of yielding to their demands for their own political territory as a means of doing so. And on the other, Moscow should view the Shapsugs as a political resource for itself in the North Caucasus. According to Skakov, the Shapsugs can be a bridge to other groups and in the Middle East, where they have close ties to many of the governments of the region.