Some of history’s most victimised peoples are obliterated; others eventually achieve statehood. Why? 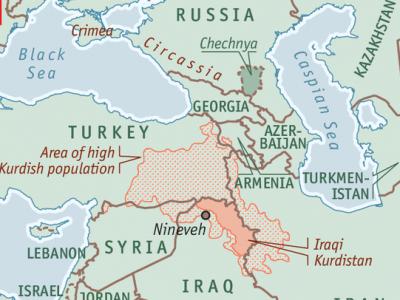 TWO peoples, both rooted in the tumultuous intersection of modern-day Iran, Iraq, Syria and Turkey. Two peoples whose traumatic histories overlap for generations—and then radically diverge.

Both were short-changed by the Ottoman empire’s collapse, and suffered in the Arab-dominated countries carved out of it (see map). Yet one of these perennial victims of Middle Eastern upheavals, the Kurds, may be set to achieve its own state. The other, the Assyrians, or Syriacs, Aramaic-speaking Christians whose ancient capital is Nineveh, is politically marginalised, disinherited and now hounded by Islamic State. “We dream of a place on Earth to call our own,” says Bassam Ishak of the Syriac National Council of Syria.

History’s combustions are unpredictable. A country for the Kurds—which they will eventually get in northern Iraq if, or when, they upgrade their current autonomous status to full sovereignty—seemed unlikely for most of the 20th century. The dream of a Jewish homeland in Palestine once looked at least as fanciful. History intervened. Yet, amid its luck and chaos, there are reasons why the Kurds, like some others, are set to make the leap from tragedy to sovereignty, while many put-upon minorities do not. The pattern offers clues as to which apparently benighted community might triumph next.

The most important factor, says Eugene Rogan, a historian at the University of Oxford, is “critical mass”—whereby, despite being a minority in a larger polity, a group forms a majority in a particular, separable bit of it. That is the case for the Kurds in northern Iraq; it is nowhere true of the Assyrians, whose greatest concentration, in north-east Syria, has been dispersed by the civil war. Nor is it true, for example, of the Crimean Tatars, resident for centuries in the Crimean peninsula until their entire population was banished in one of Stalin’s monstrous relocations (see article).

It is useful if the minority have a long-standing, fairly legitimate claim to the territory they inhabit. Physical geography can play a role: some Iraqi Kurds speculate that their mountainous domain helped them both to resist invaders and to safeguard their culture. How such places were first subsumed by a bigger power matters, too.

“You are likely to be swallowed whole,” Jean-Jacques Rousseau warned the Poles before their lands were partitioned by Austria, Prussia and Russia in 1772; “hence you must take care to ensure that you are not digested.” Maintaining a national consciousness is part of that. But administrative and legal details also count. Compare Armenia and Chechnya. Slaughtered by the Ottomans during the first world war and betrayed by the Western powers, as empires imploded around them Armenians nevertheless managed to establish a short-lived state. It was gobbled up by the Bolsheviks; but as Vicken Cheterian, an Armenian commentator, says, because Armenia notionally entered the Soviet Union as a state, it emerged as one in 1991. What had seemed a meaningless internal border became an international one. By contrast the Chechens were violently incorporated into Russia itself—and remain there, despite two bloody separatist conflicts.

Bloodshed and suffering can wreck national aspirations. Consider the Circassians, a stateless nation originating in the north Caucasus. Hundreds of thousands of destitute Circassians died in 1864 as they fled across the Black Sea from the tsar’s army, sometimes paying for their passage with their children. Their boisterous weddings, ethos of hospitality and codes of respect and honour are preserved in Turkey and elsewhere; some still long for enhanced autonomy within Russia or even independence. But, as Zeynel Besleney, an observer of Circassian politics, notes, others resignedly concentrate on achieving minority rights in their adopted homes.

Yet where suffering does not obliterate hopes of self-rule, it can galvanise them. “Suffering creates a culture of messianism,” notes Norman Davies, a historian, enabling nationalists to mobilise their compatriots. It also helps to garner diplomatic support, essential for groups seeking self-determination, says Johanna Green of the Unrepresented Nations and Peoples Organisation, a network based in The Hague. The Circassians and the Assyrians (subject, like the Armenians, to massacres in 1915) would like their tragedies, too, to be regarded as genocides. Ditto some Crimean Tatars (whose aim, now, is not sovereignty but a more modest form of autonomy): the belief that the deportation was a genocide should, says Arsen Zhumadilov of the Crimean Institute for Strategic Studies, “be spread wide enough in the world so that, when we are hurt today, the pain is felt everywhere”.

And trauma can also bequeath another important asset: diasporas, whose lobbying, broadcasting and fund-raising are ever more important. Students of Zionism note wryly that, if it succeeded in attracting all Jews to Israel, the state’s future would be jeopardised, because the diaspora’s political and financial aid is vital. The benefits are intellectual as well as practical. Barham Salih recalls how nationalist ideas flourished among Kurds who, like him, fled Saddam Hussein’s Iraq. Many—like Mr Salih, a former prime minister of the Kurdish regional government—returned with valuable expertise. (Diasporas can also be obstructively hardline: “In the diaspora you live the dream,” Mr Salih says; “here you have to deal with reality.”)

None of these considerations matters unless, like Iraq—and the Soviet, Austro-Hungarian, British and Ottoman empires before it—the host regime crumbles, or more unusually, consents to a secession. But its vassals must be equipped to exploit the crisis when it comes.

Critical mass; plausible borders; sympathy abroad; a story; a diaspora; fragile overlords: where might these conditions next be met? Russia, itself an internal empire, could yet disintegrate. So, under the strain of democratisation, might China, perhaps opening a path to statehood for Tibet and the Uighurs, persecuted Muslims. Another realignment of the Middle East seems inevitable. If Syria falls apart, speculates Mr Ishak, the Assyrian, some of his scattered brethren might come back. In the very long term, there is always hope.