Is Another Bi-National Republic About to Come Apart in the North Caucasus?

At least some in Moscow are quite willing to play up fears of that happening to keep the Turkic Balkars and Karachays in line and to continue its campaign to divide the Circassian national movement, a campaign that shows no sign of ending especially because the Circassians are gaining more support abroad. 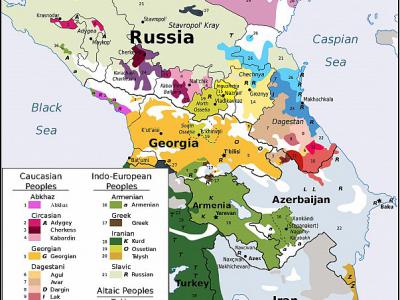 Staunton, July 9 – One of the most cynical methods the Soviet government employed to divide and rule non-Russian nations was the establishment of republics with two titular nationalities because such arrangements guaranteed that the two were more likely to view the other as a problem and threat than to see Moscow as responsible.

At the end of Soviet times, there were three such republics, Chechen-Ingushetia, Kabardino-Balkaria, and Karachayevo-Cherkessia. The first broke up at that time, but the other two have survived because they are part of a larger concern that still animates Moscow’s policies in the region: keeping Circassian nations from coming together and forming a single republic.

Were either of those republics to fall apart, it would almost certainly trigger a broader reordering of the borders in the region as Circassians – including the Adygey, the Kabardins, and the Cherkess – would certainly view a separate Kabardin or Cherkess republic as the nucleus of a future state.

And because of that likelihood, at least some in Moscow are quite willing to play up fears of that happening to keep the Turkic Balkars and Karachays in line and to continue its campaign to divide the Circassian national movement, a campaign that shows no sign of ending especially because the Circassians are gaining more support abroad.

But if Moscow found it relatively easy to maintain bi-national republics in Soviet times – it could appoint officials to reflect the ethnic “balance” it wanted to ensure by using quotas – the task of the enter now is complicated by the fact that in winner-take-all elections, the local majority will win more than its share of seats and positions, freezing out the other.

That appears to be happening in Karachayevo-Cherkessia now, to judge from an article entitled “The Cherkess are Upset by the Election Policies of the Authorities” in today’s “Nezavisimaya gazeta” (ng.ru/regions/2015-07-09/2_cherkesy.html).

Its author, Aleksandr Shapovalov, the Rostov correspondent of the Moscow paper, reports that yesterday, Mukhamed Cherkesov, the head of the Adyge Khase-Chekess Parliament, declared that “over the course of recent times, the situation of the Cherkess in the republic has significantly worsened.”

“Cherkess are practically not represented in the organs of power; their rights are violated in the formation of the government of Karachayevo-Cherkessia and of other organs of power,” Cherkesov said. As evidence of this, he pointed to the fact that only one Cherkess has been hired by the republic procuracy over the last five years.

Given this, the activist said, the Cherkess  plan to convene an extraordinary congress of Adyge-Khase this fall. That meeting, according to the “Nezavisimaya gazeta” journalist, “in all probability” will raise the issue of restoring a separate Cherkess Autonomous Olbast as it had existed until 1957.

At present, the Cherkess are the third largest nationality in the republic, after the Karachays and the Russians. They number some 60,000 people with “the majority of them living compactly on the territories of Khabez and Adyge-Khabl districts, a settlement pattern that makes their situation both worse and better.

On the one hand, as activists complain, the Karachay-dominated government can and does direct funding to other districts where the Karachays or Russians are the more numerous, something that angers the Cherkess but about which they have been able to do little to change in recent times.

But on the other, this settlement pattern means that there is a territorial basis for the Cherkess challenge to Karachayevo-Cherkessia; and the very fact that it has now been mentioned in a central Russian newspaper is certain to set off alarm bells in Moscow, which will now have to come up with a new strategy to try to block the resurgent Circassians.