Moscow is cracking down on Circassian leaders and media, but not to the extent that would spark a major backlash from the ethnic group. 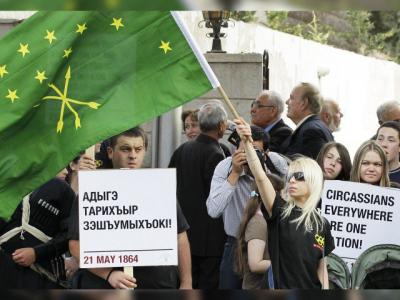 - The Circassians, a small ethnic group living in the Russian Caucasus, will draw more of Moscow's attention as Circassian activists become more organized and more outspoken in their calls for autonomy.

- In light of the Circassians' large diaspora in the West, the Kremlin will view the Circassians' increasing activity as a potential opportunity for foreign influence to create unrest in Russia at a time when the country is dealing with other crises.

- As it has done with other ethnic and regional separatist movements, Moscow will crack down on Circassian leaders and attempt to disrupt any support the separatists might be receiving from abroad.

Mukhamed Cherkesov, head of the traditional Circassian council Adyghe Khase, said the group will hold a congress this fall to discuss how to protect the ethnic Circassians in the Russian Caucasus and how to petition the Kremlin for a Circassian autonomous republic within the Russian Federation. The Circassians' desire for unity among their divided populations and for autonomy from Russia is not new. However, intensifying nationalism, growing Internet use and a generational change have led the ethnic group to become more organized.

The Kremlin is keeping an eye on the increasingly capable Circassian pro-autonomy activists. Crackdowns on similar movements in recent years illustrate Moscow's growing unease with any movement that could lead to instability in Russia or challenge Moscow's control — particularly if the movement has foreign support. For now, the Circassians are seeking autonomy as a united republic rather than outright separation from Russia. However, Moscow is concerned that movements asking for autonomy eventually will want more. Thus, the Kremlin will crack down on the Circassian activists and leaders ahead of the upcoming Adyghe Khase congress and work to interrupt any ties the activists have with foreign powers.

Who Are The Circassians?

The Circassians are allegedly the oldest indigenous group in the Northern Caucasus. The group once was pagan, then Christian and now is predominantly Sunni. The Russian conquest of the region in the 19th century created a Circassian diaspora, mostly in Turkey but also in Jordan and Syria. The Russian Empire frequently warred with the Circassians, who have accused the Russian Empire of committing genocide in the 1860s. Currently, 700,000 Circassians remain in Russia, mostly in the Caucasus republics, and another 4 million to 8 million live abroad.

During the Soviet era, the Kremlin had a policy of dividing strongly united ethnic groups and intermixing them with rival ethnicities. The Soviets divided the Circassians among three autonomous republics — Adygea, Karachay-Cherkessia and Kabardino-Balkaria — where they intermixed mostly with Karachays, Balkars and Russians. In an attempt to prevent any sense of pan-Circassian identity, the Soviets promoted separate identities, such as Adyghe, Kabardin and Cherkess, for the Circassians within their respective republics. The Soviets also attempted to impose the Soviet identity on the Circassians to keep the ethnic group from uniting with similar Muslim groups in the region, such as the Chechens or Abkhaz, who they consider "brothers." The Soviets strictly prohibited movement between the regions in order to maintain all these complex divisions and prevent a united group, whether Circassian or Muslim, from rising up against Soviet rule.

These divisions persisted in the post-Soviet 1990s; a poll showed that 65 percent of ethnic Circassians wanted to remain in their current republics. However, a 2010 poll by pro-Circassian group Elot showed that 77 percent of Circassians want their own separate republic. There are several reasons for this change. The first is the rise of nationalism, ethnic tensions and concern over growing Muslim groups in Russia. In the Caucasus and Volga regions, informal ethnic brigades have been created to protect their own people, leading to a renaissance of Circassian nationalism.

The Kremlin has long considered the Republic of Adygea, where Circassians make up 25 percent of the population, as distinct. Karachay-Cherkessia and Kabardino-Balkaria border one another, but the Russian Krasnodar Krai region wholly surrounds Adygea. This isolation has led to less fear of Circassian nationalism in the republic. Consequently, the Kremlin has allowed a Circassian, Aslan Tkhakushinov, to be president of Adygea. Despite the low level of concern about Circassian activism in Adygea, Tkhakushinov has traveled to the Circassian diasporas around the world for the past decade, promoting their return to their homeland in the Caucasus. In recent years, the Kremlin has set a strict cap on the number of Circassians returning to Russia from abroad.

A number of Russian nationalists have fled Adygea as well, citing Circassian political dominance. The region's ethnic Russian population has fallen from 78 percent to 52 percent in the past 15 years, partly because of lower Russian birthrates and partly because of growing anti-Circassian sentiment. In 2012, Russian nationalists petitioned the Kremlin to absorb Adygea into Krasnodar Krai — a proposal still on the table in the Kremlin.

Second, the Caucasus is feeling the effects of Russia's economic decline. During the past two years, industrial output has fallen by one-third, on average, in each of the three Circassian republics, and investment into the republics has dropped by 50 percent. Moreover, federal subsidies for these republics have declined. Previously, the Kremlin subsidized nearly 70 percent of the republics' regional budgets, but that amount has fallen to just under 50 percent. Although the republics are still considered highly subsidized, the Kremlin gives more aid to the neighboring regions of Chechnya and Ingushetia, subsidizing 85 percent of their budgets.

These republics, and the overall Circassian population, have long faced political, economic and ethnic issues — the Circassian separatist movement has been around for more than 150 years. However, over about the past seven years, the Circassian movement has solidified across the republics, leading to more demands for an autonomous Circassian republic. Two reasons for this new degree of unity are generational changes and greater interconnectivity in the country.

Previously, Circassian grievances were handled by the ethnic group's government structure, the Adyghe Khase, which the Kremlin classifies as a nongovernmental organization. But in 2009, hundreds of young people protested the Adyghe Khase's national forum, claiming it was filled with too many "old" leaders and had been co-opted by the Federal Security Services (FSB). The Adyghe Khase traditionally has followed the Kremlin line, but the organization is starting to include more young leaders, reigniting its relevance.

Though it is difficult to quantify, the number of pro-Circassian movements outside of Adyghe Khase has grown noticeably. According to regional analysts, many of the new movements — such as the National Congress of Cherkessk and Circassian Youth Initiative — are more oriented toward younger Circassians. This trend, along with the increasing Circassian unity in the various republics, is likely a result of the country's growing use of the Internet. Internet use in Russia has increased from 2 percent of the population in 2000 to 15 percent in 2005 to 64 percent in 2015.

The number of websites aiming to spread Circassian history and politics has boomed. Online Circassian news portals, such as NatPress, CircassianWorld and Elot, were created. Western literature on the Russo-Circassian Wars, which was banned in the Soviet period, can now be accessed online. Access to the Internet has enabled the once-divided Circassian movements in each republic to communicate online and plan meetings and forums to mix the various Circassian groups. Over the past few years, the number of pan-Circassian meetings, workshops and protests has grown, whereas before these events were mostly isolated within each republic. Online groups can provide an organizational foundation that, with the help of social media, can spread the pan-Circassian message.

However, increased Circassian Internet use has also made it easier for the FSB and other security services to monitor Circassian activity. For example, ahead of the 2014 Sochi Olympics, Circassians held numerous demonstrations to protest the games being held in their historical homeland. Western media took the opportunity to cast the Russian government's treatment of the Circassians in a negative light. In the months leading up to the games, dozens of Circassian politicians, activists and journalists were arrested. The website NatPress reportedly fell under Russian oversight, and CircassianWorld was shut down. In 2014, a Circassian youth group used fliers rather than the Internet to publicize its planned protest.

The Kremlin has thus far ignored the Circassian push for a republic and kept the ethnic group geographically divided. The scheduled Adyghe Khase congress is meant to attract thousands of Circassian politicians, scholars and activists, including Circassians from abroad. This will aggravate the Kremlin's concerns about outside powers using Russia's already high ethnic tensions to attempt to stoke social uprisings.

Most Circassians living abroad are in Turkey, although tens of thousands of Circassians live in Europe and the United States. Several leading Circassian activists have fled Russia during the past few years, and two of the most prominent activists — Murat Berzegov and Fatima Tlisova — now live in the United States. In 2014, nine Circassian leaders (seven from Russia, one from Turkey and one from the United States) published a joint document describing a Russian push to discredit them by referring to their movement as "extremist." Russian authorities detained many of the Circassian leaders in Russia who signed the document.

The last thing the Kremlin wants during its current series of crises is another conflict like Chechnya. The Circassians as a group have not shown a proclivity toward militancy, like other Caucasus separatist groups, though some Circassians supported their Chechen and Abkhaz brethren during conflicts. However, there have been calls on pro-Circassian websites over the past two years for more extreme activities. In addition, in December 2013, the Caucasus Emirate took credit for bombings in the Russian city of Volgograd and linked the act to Russia holding the Olympics on the "bones of many, many Muslims buried on our lands by the Black Sea" in reference to the alleged Circassian genocide. (However, the Caucasus Emirate has become less active and less effective in recent years.)

Thus, the Russian government is taking a balanced approach to containing the Circassian movement. Moscow is cracking down on Circassian leaders and media, but not to the extent that would spark a major backlash from the ethnic group. Ahead of the Adyghe Khase congress, the Kremlin will increasingly monitor and disrupt the activists' relationships abroad. Foreign Circassians likely will not be allowed inside Russia or at the congress, and Moscow could limit Russian-based Circassians' travel abroad.

The Kremlin's strategy is working thus far, but there is a wildcard to consider: Chechnya's response. The Circassians and Chechens have had both warm and hostile relations throughout history. Both are regional powers in their own right. During the two Chechen wars following the collapse of the Soviet Union, the Circassians lent mostly political support to the Chechen separatists. Chechnya was a test case for independence for most of the Caucasus republics. Since the wars, many Circassian leaders and activists have resented the Kremlin's preferential treatment of Chechnya. Not only does the Kremlin allow Chechnya to be a united autonomous republic (whereas the Circassians are divided), but the former war-torn nation also receives more subsides from the federal government than any other republic.

Chechen President Ramzan Kadyrov wants his republic to be the grand stabilizer in the region. Moreover, Kadyrov has pushed for expanded military and political powers over other Caucasus republics. Chechnya would not want a united Circassian republic that could compete in the region. Chechnya has meddled and militarily intervened in its fellow Caucasus republics in the past, and greater Chechen activity in other republics would pose an even larger security concern for Moscow.

Many groups, such as the FSB, would encourage the rise of a united Circassian movement in order to balance the Chechen republic's strength in the region. However, the FSB knows that strengthening such autonomous non-Russian groups can easily get out of control, as it did in Chechnya. Though the rise in Circassian nationalism is contained now, separatist groups like the Circassians can become more volatile and aggressive when larger crises erupt in Russia.