Large-scale police operations in Kabardino-Balkaria and elsewhere in the North Caucasus may simply be part of the larger game that Vladimir Putin is playing with the West, desperately trying to strike an alliance with the West against Islamists while sweeping the annexation of Crimea and Russia’s covert involvement in eastern Ukraine under the rug. 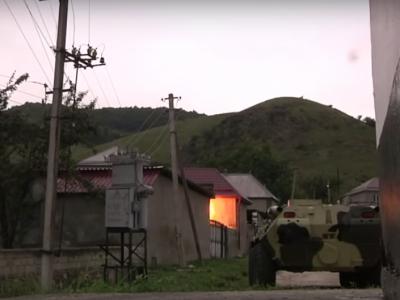 Brutal police operations in Kabardino-Balkaria in recent months have prompted some experts to conclude that the republic’s governor is building a “police republic.” Yuri Kokov has ruled Kabardino-Balkaria since December 2013, although he was officially appointed governor in October 2014. A career police official, Kokov had led key departments in the Russian Ministry of Interior headquarters in Moscow—the Department for Combatting Organized Crime and the Department for Combatting Extremism. Kokov’s critics say he is obsessed with fighting extremism but does little to improve the economic conditions of Kabardino-Balkaria’s people. Police abuse and a worsening economy are a dangerous combination that could cause a social implosion, according to some analysts (Kavkazskaya Politika, September 2).

Kabardino-Balkaria was a quiet region with a resort-oriented economy before the large-scale attack on its capital, Nalchik, in 2005, when scores of militants staged a coordinated attack on republican government offices but were quickly repelled by security forces. In fact, the attackers suffered almost three times as many losses as the government forces. By comparison, a similar attack on Ingushetia in 2004 left nearly 70 servicemen dead, while the militants suffered almost no casualties. The unusual ratio of the losses in the Kabardino-Balkaria attack led some observers to conclude that the attackers were intentionally provoked by the police as a pretext to launch a campaign of intimidation and pressure against the republic’s growing Muslim community.

Some analysts say that the current campaign against the militants in the republic is moving it back to the period before the 2005 attack. This past July (YouTube, July 24) and August (YouTube, August 3), government forces launched two large-scale special operations in Nalchik, killing 12 alleged militants. In both special operations, heavy military equipment was used in densely populated city areas. The operations sparked an uproar among local residents—one of them, Rimma Gukova, launched an online petition to Russia’s president and parliament, demanding they put an end to the armed campaign in the republic. The petition said that people in the republic were tired of the constant special operation regimes and protested the killings of both the practicing Muslims and police. The petition demanded that “the killings and illegal persecution of the young people” be halted (Kavkazsky Uzel, August 19).

The worsening security situation in Kabardino-Balkaria has been accompanied by less than impressive economic indicators. After Yuri Kokov came to power, he reportedly identified his own personal grand economic project—the restoration of the Tyrnyauz tungsten and molybdenum ore processing plant, which was one of the largest enterprises in the republic before it went into decline. The project has not yet started and its prospects remain dim given Russia’s current financial downturn. Kabardino-Balkaria persistently lags behind the rest of Russia’s regions and, in some respects, even behind the other republics of the North Caucasus, which are not known for their outstanding economic performance themselves. The republic never recovered from the slump in goods and services in 2013 and has not been able to return to the level of 2012, although its agricultural sector has developed steadily throughout this period. At the same time, Kabardino-Balkaria is not considered to be among the most volatile republics of the region, which means it is not the recipient of the kind of large budgetary funds from Moscow that Ingushetia, Chechnya and Dagestan each receive. Hence, the republic runs a growing debt, which currently amounts to about $100 million (Kavkazskaya Politika, September 2).

The spike in violence in Kabardino-Balkaria and the growing discontent among its inhabitants does not mean Yuri Kokov is a particularly savage representative of the Russian police force. It is notable that the main addressee of the petition against violence in the republic was not the governor, but the Russian federal authorities. It appears that the residents of Kabardino-Balkaria are perfectly aware of who decides how much violence is allowed in the republic at any given time. Large-scale police operations in Kabardino-Balkaria and elsewhere in the North Caucasus may simply be part of the larger game that Vladimir Putin is playing with the West, desperately trying to strike an alliance with the West against Islamists while sweeping the annexation of Crimea and Russia’s covert involvement in eastern Ukraine under the rug (Kremlin.ru, September 4).

Whatever the true motivation for the spike of violence in Kabardino-Balkaria, residents of the republic are certainly tired of living in fear during a time of official peace and are demanding an end to the government’s quasi-military campaign. Economic grievances may further amplify the brewing discontent of the people in Kabardino-Balkaria and could force Moscow to consider replacing the republic’s governor.