Russian consular officials in Syria have recently tightened the requirements for Circassians applying for a Russian entry visa. Whether the planned Presidential Council appeal to Putin will result in a more humane approach to the Circassians' dilemma is questionable. 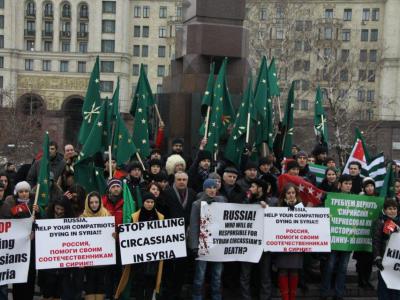 Ever since the start of the civil war in Syria four years ago, members of that country's Circassian minority fleeing the fighting have sought to settle in the regions of the North Caucasus from which their ancestors were expelled during the Tsarist Russian wars of conquest in the 19th century.

But due to the clear reluctance of the Russian authorities to help them, only between 2,000 to 3,000 from a community variously estimated at between 55,000 and 100,000 have succeeded in doing so. (That huge discrepancy in the estimated number is partly due to the Syrian authorities' failure to differentiate between Circassians and members of other North Caucasus ethnic groups such as the Chechens and Ossetians.)

Russia's Presidential Council for the Development of Civil Society has just drafted an appeal to President Vladimir Putin to accept Circassian refugees from Syria and settle them in Kabardino-Balkaria, Adygheya, Karachayevo-Cherkessia, and Krasnodar Krai -- which constitute their historic homeland.

According to Maksim Shevchenko, who initiated the appeal, the quota envisaged is only 5,000 to 10,000. But even so, Kabardino-Balkaria Republic head Yury Kokov has made clear his opposition to the Presidential Council proposal. In a September 10 statement, Kokov said that his republic has already taken in some 2,000 refugees, most of them Syrian Circassians, who have been provided with accommodation.

Kokov, a former head of the federal Interior Ministry's Antiextremism Directorate, warned of the possibility that members of "international terrorist organizations," presumably meaning Islamic State, could seek to enter Russia under the guise of refugees. He called for "special preventive measures" to preclude such infiltration.

That Kabardino-Balkaria has taken in the lion's share of the Circassian refugees so far is logical, given that it is the largest of the three republics in which Circassians are a titular nationality: the Kabardians (Circassians) constitute approximately 57 percent of the population of 860,000. But neither the republican nor the federal authorities have offered the refugees more than the bare minimum in the way of assistance. The homes that have been built for some of them have been financed privately by local Kabardian businessmen; as of late May 2015, 19 refugee families were still living in tiny rooms in a former sanatorium.

Their major problem, however, is the bureaucratic procedure for obtaining either a temporary residence permit or Russian citizenship. A voluntary organization established to help the Circassian refugees do so was forced to close down early last year after the FMS imposed a draconian fine for allegedly violating the law.

The federal government has consistently turned a blind eye to the Circassian refugees' plight, ignoring the findings and recommendations of two successive fact-finding missions dispatched to Syria in March and May 2012 by the Federation Council at the behest of Albert Kazharov, a senator from Kabardino-Balkaria.

According to Olga Efendiyeva-Begret, who works for an organization in Kabardino-Balkaria that seeks to help the refugees, Russian consular officials in Syria have recently tightened the requirements for Circassians applying for a Russian entry visa. Whether the planned Presidential Council appeal to Putin will result in a more humane approach to the Circassians' dilemma is questionable.