Russia as safe zone for Syrian refugees? It is not as odd as you would think.

A centuries-old imperial conquest, along with an unusual route to Norway, may lead Syria is migrants to wash up on Russia′s shores. 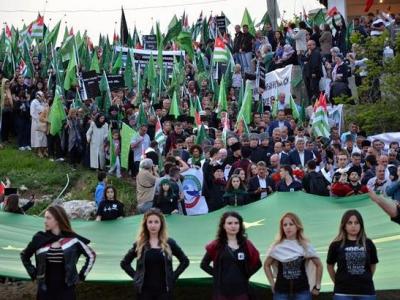 As Europe struggles to handle the inundation of Syrian refugees in recent weeks, Moscow has so far looked on with a touch of schadenfreude. While Russia is allied to Syria – and has the resources to accommodate many of its people – so far the Kremlin shows little recognition that the migration crisis is a common problem that should be solved collectively.

But as Russia's military involvement in Syria escalates, a debate is stirring over its obligations to Syria's beleaguered ethnic and religious minorities. There is growing pressure to repatriate at least some of Syria's 100,000 strong Circassian community, who were brutally expelled from Czarist Russia 150 years ago, but who regard Russia's north Caucasus region as their historic homeland.

And even for those Syrians not looking to their ancestral lands, Russia offers another opportunity: a far more circuitous, but possibly much safer, route to Europe – by bicycle over the border with Norway.

Either factor could bring the Syrian refugee problem to Russia's doorstep, without regard to Moscow's wishes.

"So far Russia makes it very hard for Muslim refugees to come; it puts a lot of bureaucratic obstacles in their path. But this needs to change," says Maxim Shevchenko, a well-known Russian journalist and member of the Kremlin's presidential council on human rights. "In the present situation, where minorities in Syria are threatened with genocide at the hands of IS, Russia has the ability and the responsibility to do something about it."

With a population of 144 million spread over a vast territory and a standard of living on par with the likes of Hungary and Poland, Russia has the resources to absorb new arrivals, should it chose to. Over the past 18 months, it has taken in more than a million Ukrainians fleeing the war next door.

"Russia seems ready to digest large numbers of people, but politicians are not ready to take responsibility," says Konstantin Kalachyov, head of the independent Political Expert Group in Moscow. "Russia only thinks about this issue in the context of bigger politics."

Circassians present a special problem for Russia, since accepting them back would require acknowledging the harsh treatment their ancestors endured. During the 19th century, the Russian Empire drove the Circassians out and absorbed their lands in the northwest Caucasus.

Since Syria's civil war began in 2011, about 1,000 Syrian Circassians have moved to the north Caucasus republics of Karacheyevo-Cherkessia and Kabardino-Balkaria, where their ancestral language is understood. But most report that they have received little official help.

"Many people here have been good to us, and we do feel wonderful to have regained our homeland," says Natai Achmez, an architect from Damascus who brought his family to Nalchik, in the north Caucasus, in 2012. "But economically, it's very hard. Many of our people prefer to go to Europe, or America, though I would like to stay and make it work for my family here."

Russia demonstrated its considerable evacuation capabilities a couple of years ago, when it carried out a limited airlift of Russian citizens, mainly women married to Syrians and their dependents, from threatened areas of the country. There are an estimated 40,000 Syrians with Russian ties, and it's probably not a coincidence that near-continuous Russian naval war games near Syria – including those currently underway – have all featured several large amphibious assault ships capable of bringing out thousands of people.

"We need to change our views and become concerned about not only those who are Russian, or married to Russians, and start helping more people," says Mr. Shevchenko. He says he believes this message is being heard in the Kremlin. "I have been pressing for it, and I believe Russia will take more action."

There are currently about 12,000 Syrian refugees in Russia, according to the Federal Migration Service, only 2,000 of whom have so far received legal residency papers. Human rights activists say the bureaucratic logjam is unacceptable and point out that most of the Ukrainian refugees also lack legal documentation.

"There is no policy on refugees in our state," says Svetlana Gannushkina, chair of the Committee for Civil Assistance, a nongovernmental organization that works with migrants. "When large numbers of Ukrainians started coming here, they were at first met with kindness. But soon all official interest in them disappeared."

Russia already has a huge and largely underground population of Muslim migrant workers, mostly from former-Soviet central Asia. Experts say that any Syrian refugees who have made it to Moscow are probably blending in with that group.

AN ARCTIC ROUTE TO EUROPE?

But that could change. A summary of press reports in the Russian newspaper Komsomolskaya Pravda suggests that increasing numbers of savvy Syrians are entering Russia on student or tourist visas, hopping on the train to Murmansk, and then heading directly to Norway's single border crossing with Russia.

Fewer than 200 people have been so far recorded using this unique method of escape, to Russia's far north by train and into Norway, often by bicycle from nearby Murmansk, high above the Arctic Circle.

The paper says that local taxi drivers are charging over $1,000 for the two-hour drive, while the price of bicycles has soared.

If the route becomes more popular, it could force Russia to deal with a problem that it has so far tried to ignore.

"It's time for Russia to start taking a hard look at this," says Shevchenko. "If we're going to support Assad, we need to help the Syrian people too, and for that we should have some clear plans in place."