As the conflict in Syria intensifies and Russia’s large-scale involvement in it has become a reality, the conflict also becomes more visible to the public in the North Caucasus. This creates the unintended consequence for the Russian government of raising awareness among the Circassians and helping them organize themselves for greater political action in response to the Kremlin’s refusal to recognize their plight. 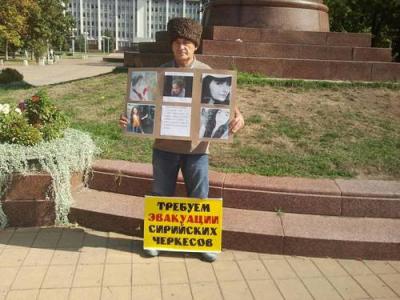 The killing of a Circassian pre-teen, 11-year-old Judy Mohammed Hair Maf, in Damascus on September 26 (Facebook.com, September 26), revitalized efforts of Circassians in the North Caucasus to repatriate their ethnic brethren from Syria. Circassian activist Khazrial Khanakhok held a protest in Maikop, Adygea, to attract public attention to the plight of the Circassians stranded in the endless Syrian conflict. Khanakhok said that he told passers-by that the girl “died of a sniper shot and the loss should not have taken place. The authorities only had to allow those Syrian compatriots who wanted to return to do so” (Natpressru.info, September 27).

The little girl reportedly was riding in a cab with her mother near Damascus when their car was hit by a sniper. The girl’s family previously resided in the Circassian village of Marj al-Sultan, in southern Syria, and left after it was taken over by the militants. In 2013, 400 people from the village signed a letter to the government of Adygea asking for help with repatriation. Neither the government of the republic nor civil organizations could do anything in response to the plea of the Syrian Circassian villagers (Natpressru.info, September 26).

Pressure is mounting on the Russian government to act on the humanitarian catastrophe in Syria. One of the unintended consequences of President Vladimir Putin’s next gamble in Syria is that Russian citizens, including the Circassians in the North Caucasus, are much more aware of the situation in Syria now than they were before the Russian airstrikes.

Even the regional governors who were installed by Moscow and remain fully depend on it have started calling on the central government to respond to the plight of the Circassians in the Middle East. On September 29, Adygea’s governor, Aslan Thakushinov, said the laws in Russia that define who are fellow countrymen should be adjusted to include the Syrian Circassians (Natpressru.info, September 30). After the Russian Empire conquered Circassian territory in the 19th century, the tsar’s government killed the majority of the local population or expelled them to the Ottoman Empire. Some Circassian activists have demanded the Russian state recognize the Circassian “genocide,” while others have taken a more cooperative stance, asking Moscow to help the Syrian Circassians. The Russian government’s response to Circassian activism has been characterized by denial, silence and quiet suppression.

Adygean Circassian activist Beslan Kmuzov has invoked the same comparison that Circassians in the North Caucasus have drawn for some time: Moscow has treated ethnic Russian refugees from Ukraine and ethnic Circassians from Syria quite differently. According to Kmuzov, regional authorities and businesses in Kabardino-Balkaria have helped Circassian refugees from Syria in secret, because of the fear of retaliation by Moscow. “Fear rules over the Caucasus. People fear coming out and saying—‘Stop killing us!’ ” Kmuzov wrote. According to the activist, instead of helping the Circassians in Syria, the Russian government staged an online propaganda campaign to dissuade the refugees from coming to their historical homeland, citing lack of jobs and other accommodations (Natpressru.info, September 28).

Indeed, most of the protests in Nalchik and Maikop have been quite small, primarily because the majority of Circassians are scared to stage public protests, fearing a violent backlash by the government. The largest public protest in Nalchik prompted a gathering of about 25 persons. These numbers hardly reflect the true attitude of Circassians toward the issue, since even regional officials who are completely loyal to Moscow have contradicted their Russian bosses, asking them to make accommodations for the Circassian refugees. Another Circassian activist, Abubekir Murzakanov, told the website Kavkazskaya Politika that “a person of any nationality can settle here . The only people who do not have this right are the Circassians” (Kavkazskaya Politika, September 29). A sense of injustice is apparently growing among the North Caucasian Circassians, even though some of them were long misled by pro-Kremlin organizations like the International Circassian Association (ICA), which many activists now openly denounce.

As a result of the failure of the Circassian organizations in the North Caucasus close to Russian officialdom, Circassian grassroots organizations are springing up. One such group resolved to erect a monument dedicated to the Russian-Circassian battle of 1779, which is sometimes referred to as the Seven Month War of 1779. Over the course of this campaign, Russian forces destroyed much of the Circassian nobility. The activists behind the monument’s construction claim they have no connection with the ICA or the Adyge Khase organization of Kabardino-Balkaria (Natpressru.info, October 2).

Even prominent Russian academics like Sergei Arutyunov have come out in favor of changing government policies toward the Circassians in Syria. Arutyunov noted that Russia has been a multicultural state and should remain so in the future; therefore, the notion of Syrian Circassians’ having a “different culture” should not be grounds for refusing to accept them. “Russia should take all the descendants of Muhajirs who wish to return, even if they are not refugees,” he said. “They have the right to return because they are our compatriots. These people were born in territory now part of the Russian Federation and they have a hereditary right to live on their ancestral land—just like the Jewish population of Israel, most of which was expelled from their historic homeland 2,000 years ago” (Kavkazskaya Politika, September 19).

As the conflict in Syria intensifies and Russia’s large-scale involvement in it has become a reality, the conflict also becomes more visible to the public in the North Caucasus. This creates the unintended consequence for the Russian government of raising awareness among the Circassians and helping them organize themselves for greater political action in response to the Kremlin’s refusal to recognize their plight.