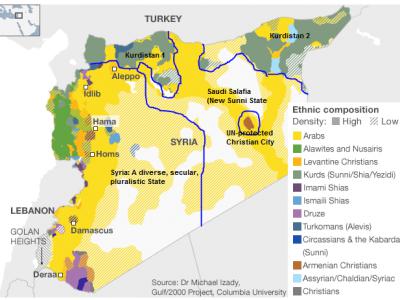 Staunton, November 20 – The approximately 100,000 Circassians in Syria are not Russian compatriots, the Russian Foreign Ministry says, and thus do not qualify for expedited admission to the Russian Federation or for the kind of support Moscow offers those it considers compatriots with special ties to the land of their ancestors.

Instead, according to a letter from the director of the foreign ministry’s Department for Relations with Federation Subjects, Parliament and Public Organizations to the head of the International Circassian Association, Circassians have the same status as all other groups in the Syrian population (aheku.net/news/society/6409).

The Russian official said that to do otherwise would be “obvious discrimination” in favor of the Circassians and  against these other groups.

This effectively ends any hopes members of that predominantly Sunni group whose ancestors were expelled from the North Caucasus by the Russian Empire in 1864 to escape repression by the Alawi government of Syria which is allied with the Shiitesand combat in that country and return to their immemorial homeland.

In January 2013, the Russian ministry issued a similar finding but cast it in significantly less unequivocal terms (http://www.ekhokavkaza.com/content/article/24877704.html); and consequently, many Circassians hoped that Moscow would give way especially as the fighting in Syria has escalated.

And third, Moscow’s efforts to form its own “pocket” organizations of Circassians are going to fail because now all Circassians and their supporters around the world can see that the Russian government has no interest in helping even those Circassians who are most at risk and who have the strongest possible claim to return home.