The organiser of the anti-Olympic protests that took place in Kabardino-Balkaria states that there have been frequent check-ups of his entrepreneurial activities by the Russian ministry of internal affairs. He believes these check-ups are connected to the statement he made stating that he has been tortured by members of the police. According to data from the anti-extremism centre, Akhokhov has been under investigation by the Police. 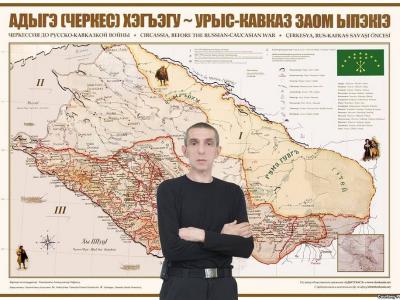 Andzor Akhokhov, Let us remember that on the 7th February in Nalchik, there was a protest held on the opening day against the Sochi Olympiad, which, was quickly had been brought to a close by the police. According to information obtained from the prosecutor’s office, overall there were 29 people detained.

Most of those detained were released. On the 8th February, the town court of Nalchik made the decision to hold 6 activists under administrative arrest. The last of these, Andzor and Aslanbek Ahovov were released on the 17th February. After his release, Andzor Akhokhov informed journalists, that he had been subjected to torture while in a Nalchik city prison. Later, on the 8th March he said that he was under pressure from members of the police force, to retract his earlier statements.

Members of the Russian ministry of internal affairs have carried out three checks of Andzor Akhokhov business activities since the start of March, “Caucasian knot” correspondent was informed by the anti-Olympic protest organiser.

“I run a private small business. I rent 250 hectares of farmland near the village Chegem-2. Between the 1st and 25th of March there have been three check-ups of my business activities by employees from the centre for the Prevention of Extremism and Economic Fraud. They surveyed my land, and visited the administration offices of the Chegem region and Chegem-2.” – says Akhokhov.

According to Akhokhov, police officers checked all the documents relating to his business. “One of the policemen told me they would come to measure the farmland I am renting. Perhaps they will do it to ensure I do not participate in any illegal schemes” – the entrepreneur added.

Andzor Akhokhov believes that his statements prompted the police monitoring of his business dealings and his subsequent arrest and torture while behind bars were directly connected to his anti-Olympiad activities, specifically the protest which took place in Nalchik on the 7th February .

Let us remind ourselves that on the 11th March Akhokhov approached the Investigative committee with a statement, in which he seeks prosecution for the police-officers who behaved violently towards him. In his statement he also describes being persecuted by the police even after being released from jail. He describes his home being searched, during which some items were confiscated, including four cars belonging to his relatives, weapons for which he has licences, and documents connected to his business.

Andzor Akhokhov explains that the cars were returned on the 20th of March, but the documents which were confiscated have still not been returned.

The press-service of the Ministry of Internal affairs for the Kabardino-Balkaria would not comment on the statements made by Andzor Akhokhov  and on the use of violence against him or the frequent check-ups on his business “We do not make any comment on this matter” – said a press-service representative to the correspondent of “Caucasian not”.

On this same note on the 19th of March the regions administrator and head of the Centre for Prevention of Extremism of the Ministry of Internal Affairs, Mr N. Mamhegov states that right now there are ongoing investigations taking place in relation to Mr Andzor Akhokhov. In addition as part of further investigation, the head for Regional Administration has demanded documents that confirm the price and rental agreement of the farmland rented by Mr Akhokhov as well as copies of his passport.